The S.A. Vaal (30,212 grt, 760 ft. long) was originally the Transvaal Castle, sailing on her maiden voyage from Southampton to South Africa for Union-Castle Line in January 1962.

Four years later she was taken over by South African Marine Corporation (Safmarine) though remaining on the same route and still managed by Union-Castle.

In February 1966 registry was transferred to Cape Town. She made her last voyage for Union-Castle-Safmarine on 2nd September 1977 and was withdrawn from service on her return and sold to Festivale Maritime Inc. a subsidiary of Carnival Cruise Lines of Miami.

Rebuilt at Kawasaki with extra decks and renamed Festivale she joined the Mardi Gras (ex Empress of Canada) on their 'Fun Ship Cruises'.

In 1978 she cruised in the Caribbean based in San Juan, Puerto Rica and in 1982 was based in in Miami operating 7 day cruises to Nassau - San Juan - St Thomas.

She was acquired by Premier Cruises of Port Canaveral in 1996 and renamed Island Breeze operating for her owners in the Caribbean during the northern winter and on charter to Thomson Holidays in the Mediterranean during the summer.

At the beginning of 2000 she was renamed Big Red Boat III as part of Premier's corporate identity. However, in September 2000 Premier Cruises ceased trading and the ship was seized by creditors for non payment of debts. 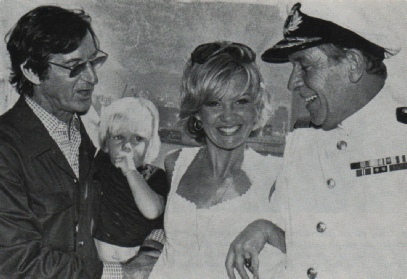 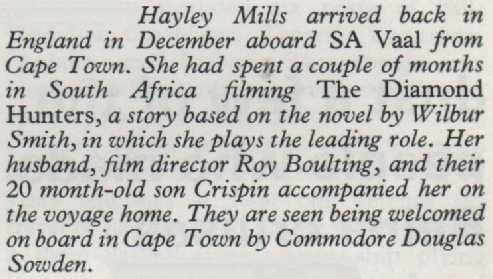 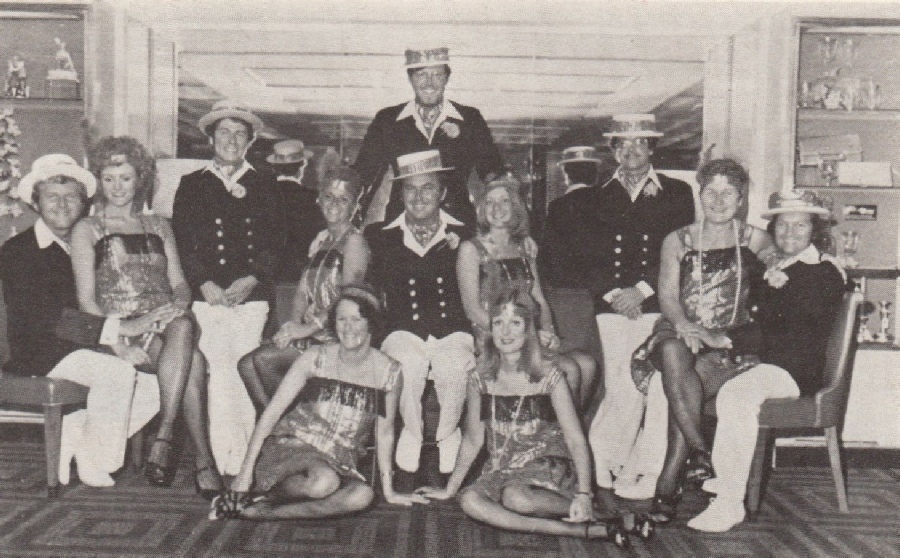 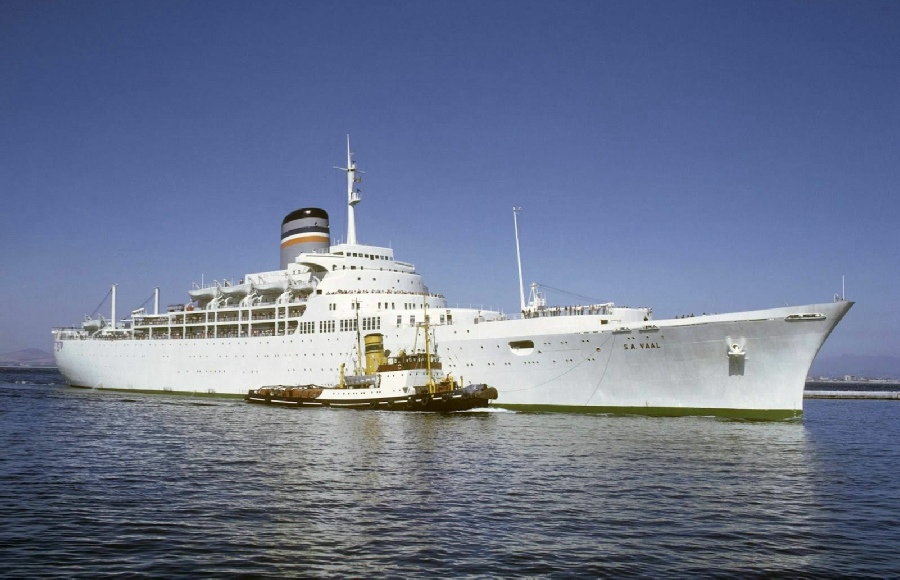 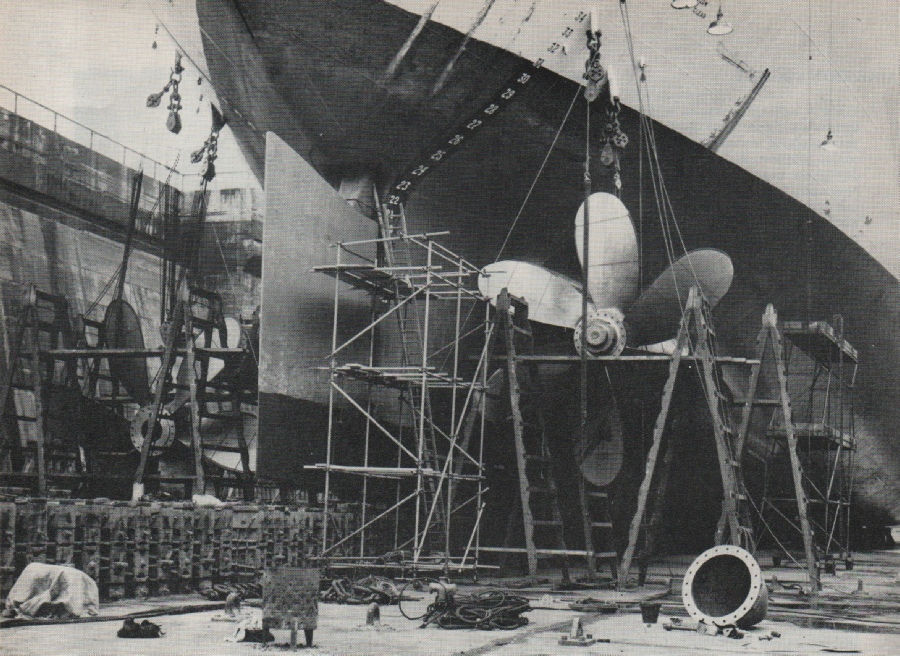 Reminds me of the story of the lady passenger who approached an officer and asked why the ship vibrated so much. He replied “Madam, if you have two shafts revolving 110 times per minutes stuck up your bottom, believe me, you too would vibrate!” 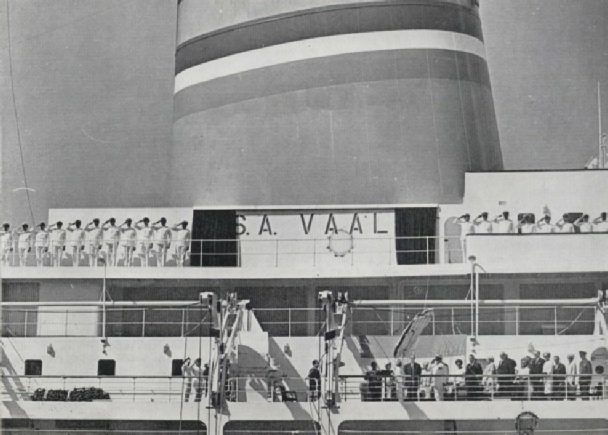 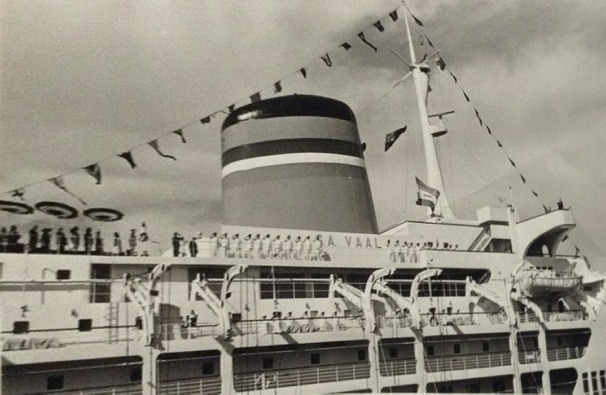 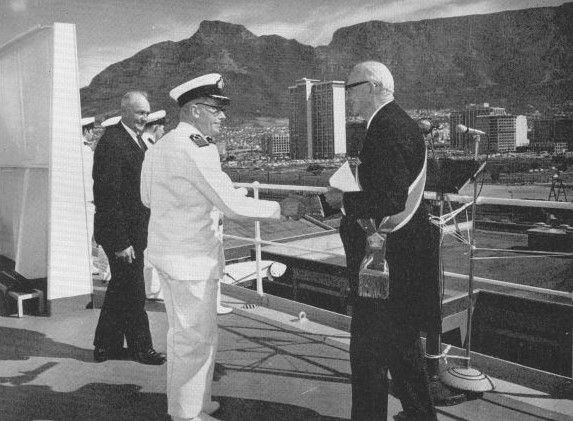 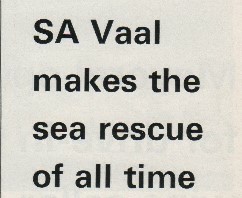 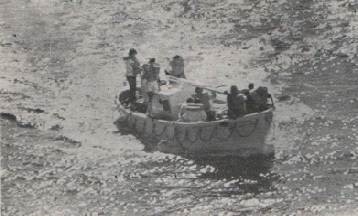 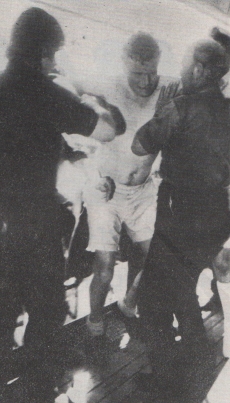 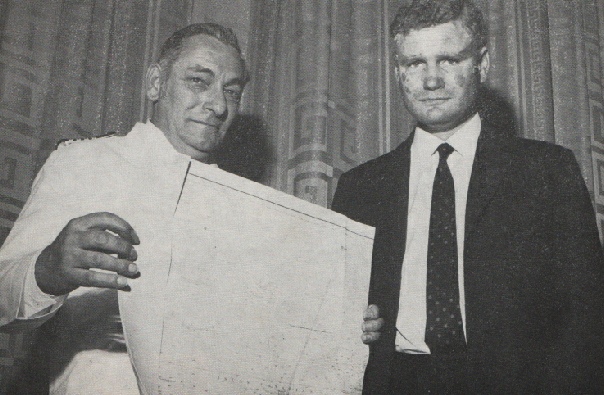 I was on board the ship and watched with my parents as the lifeboat went to his aid. He had removed his shirt to wave as a signal. The photograph confirms my Father's assertion that Honeywill was still wearing his shoes. I remember my Father also stating, that when Honeywill was spotted, a lifebelt with smoke marker was dropped from the ship. The Vaal then continued past for a considerable distance, before turning round.

The newspaper claim that after nearly 12 hours, he had drifted only 80 yards from the ship's course, is hardly credible. It is more likely that captain Freer and his crew steered a course, based on knowledge of tides and current, to predict where he might have drifted to.

How he came to fall off the ship seems never to have been explained.

Captain Alan Freer with William Honeywill safely back on board 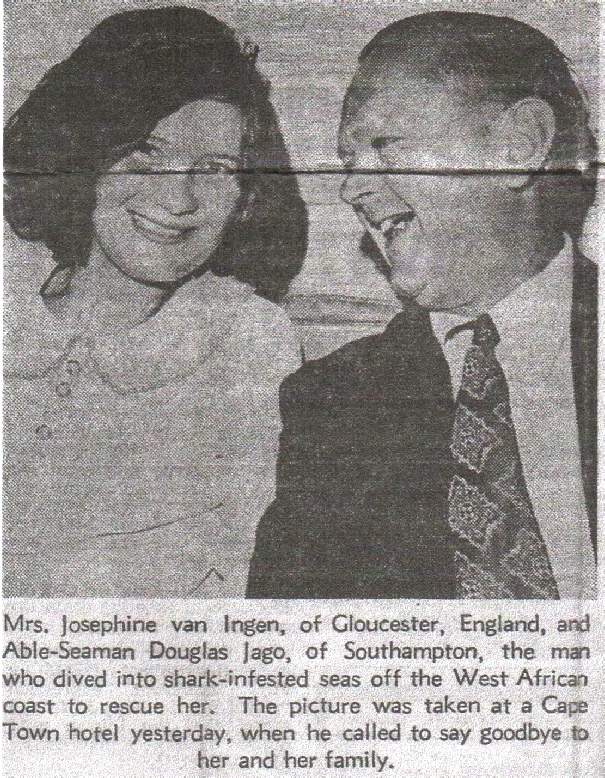 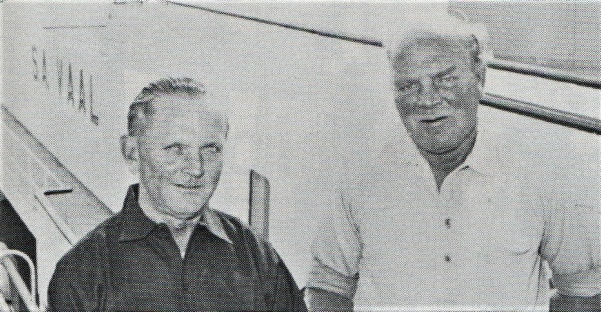 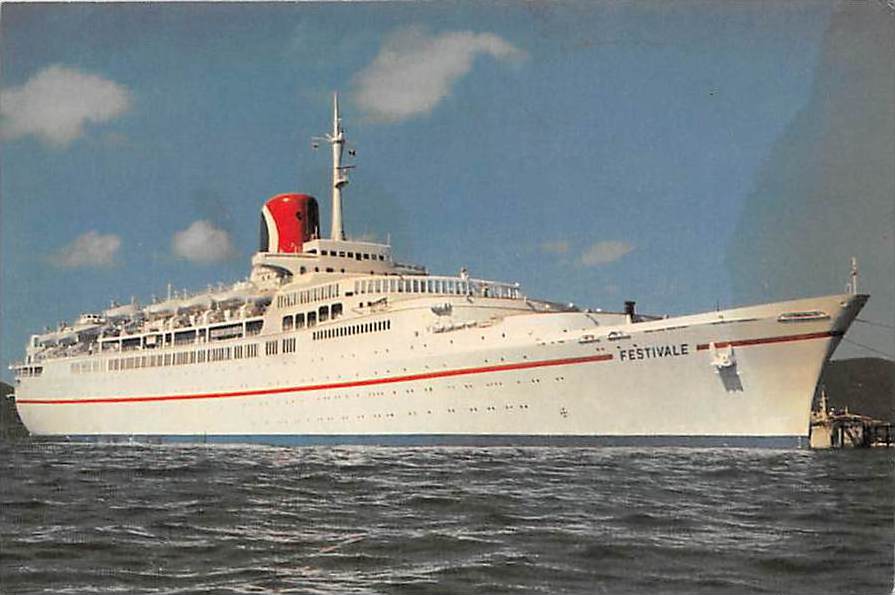 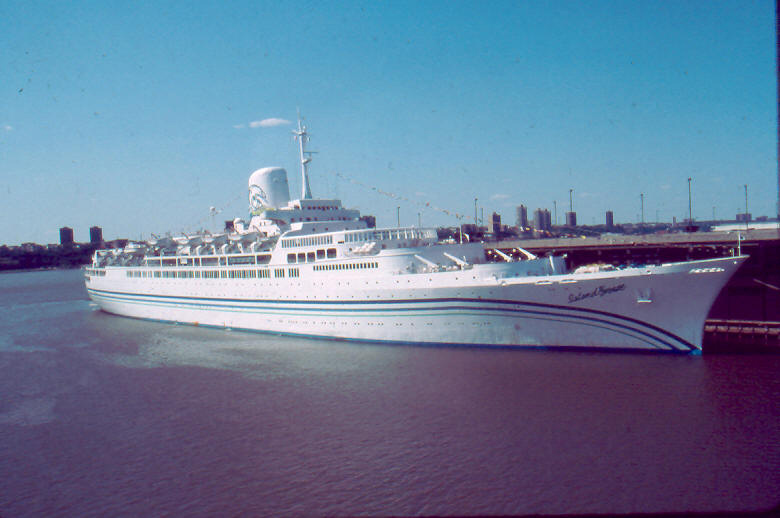 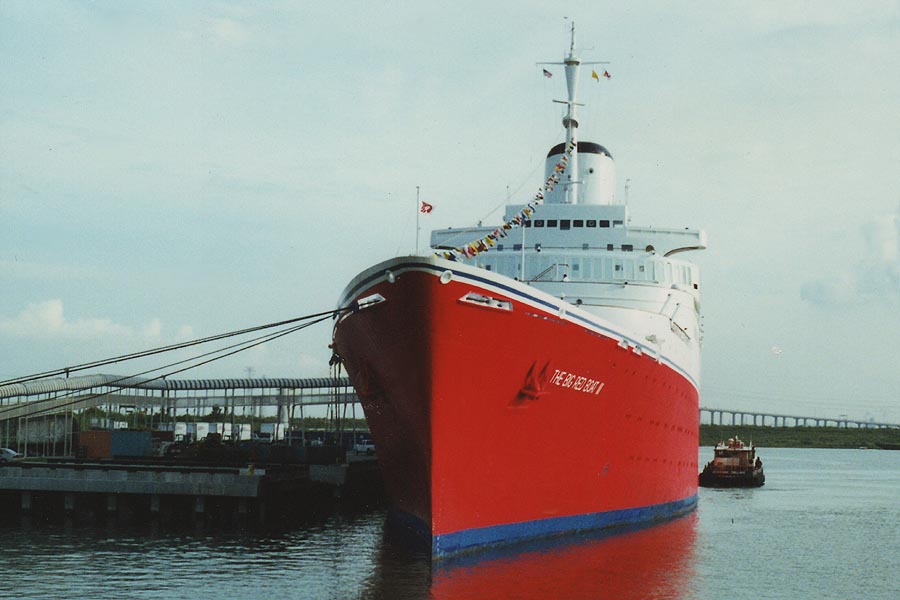 As The Big Red Boat III 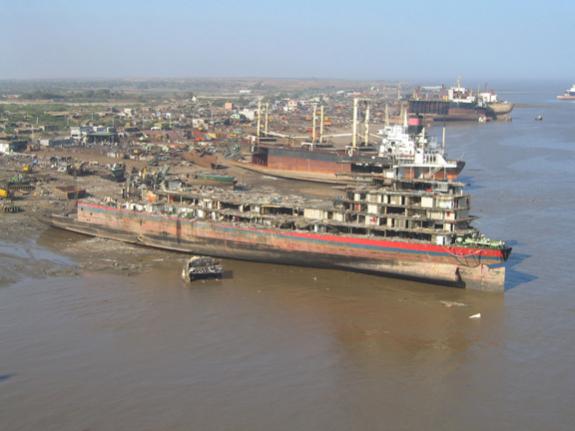 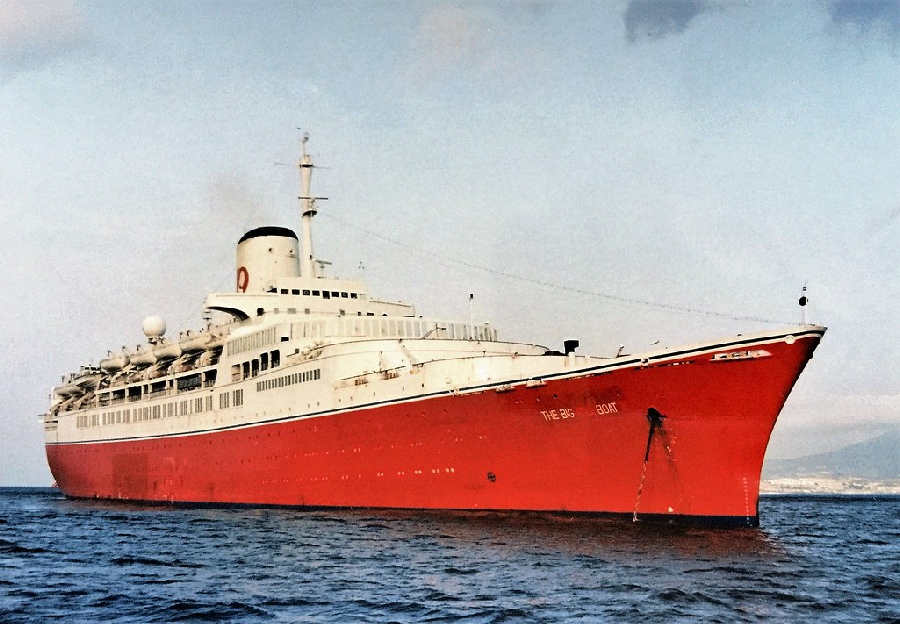 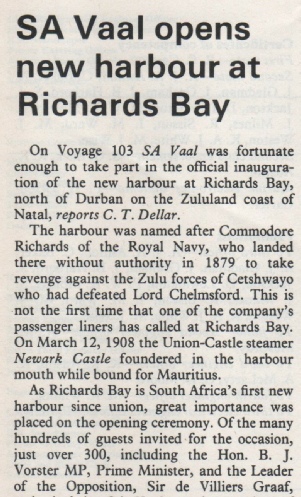 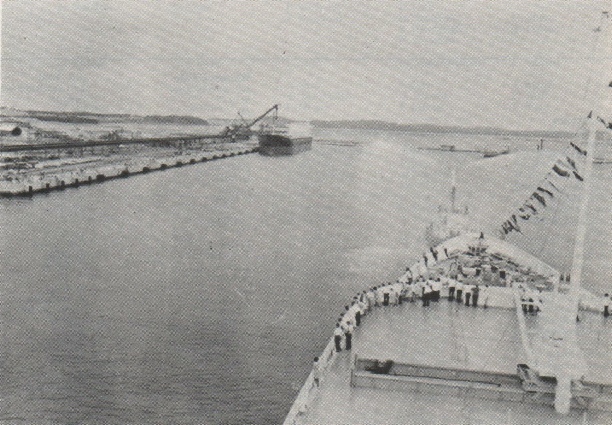 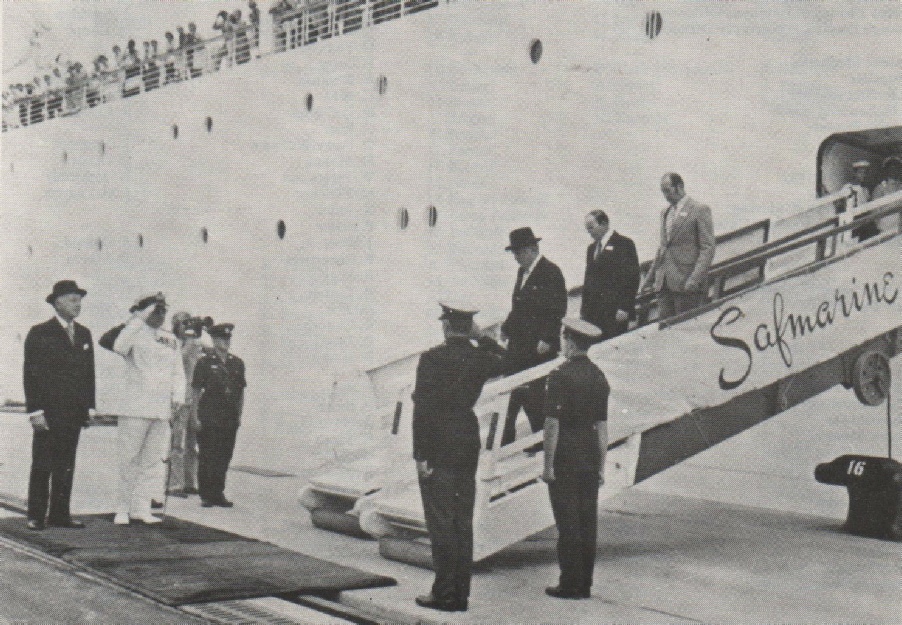 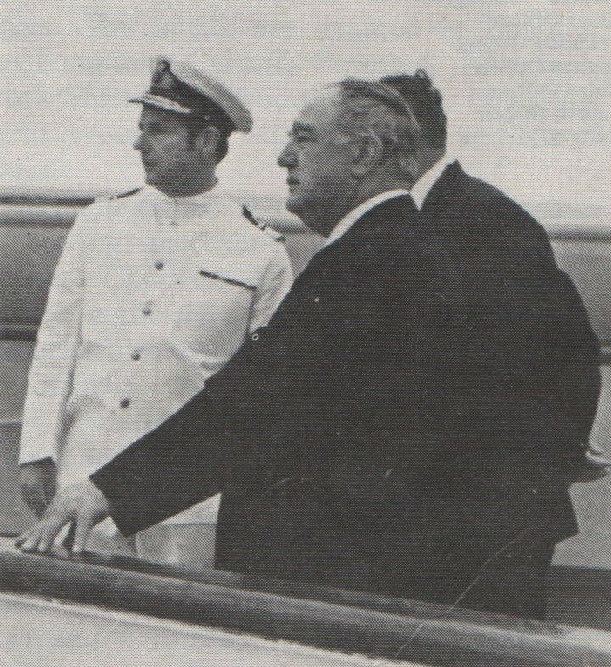 The Opening of Richards Bay - April 1976 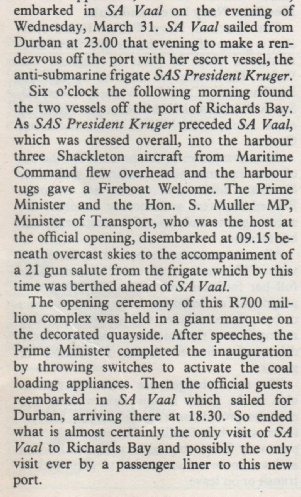 She was sold in 1977 to Carnival Cruise Lines, rebuilt and renamed Festivale for Caribbean cruising from 1978.

S.A.Vaal was withdrawn in Southampton on October 10th, 1977 and sold to Carnival Cruise Line, who rebuilt her in Japan with extra decks, almost doubling the passenger capacity.

The external appearance was not spoilt, however, and she has remained the handsome ship of Union-Castle days. Internally, the public rooms were much changed from the traditional liner.

She returned to service in 1978 as Festivale, on Caribbean cruises in partnership with ex-Canadian Pacific liners Mardi Gras and Carnivale, revolutionising the cruise industry. 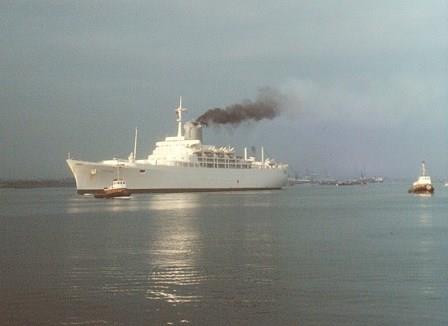 This is not the last crew list, but is probably pretty near it and was the last one available in Clansman

Leaving Southampton on her way to Japan and her new life 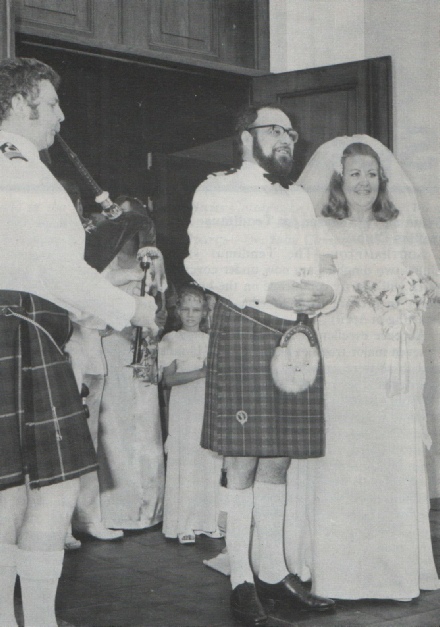