After more than 46 years afloat, Capt Charnley, 63, is retiring and plans to settle in Southern Africa with his wife, Margaret, whom he met when she was travelling aboard Windsor Castle as a passenger.

Born and brought up in Barrow-in-Furness, Capt Charnley first went to sea at the age of 15 in 1929 as an apprentice to the firm of Stephen Sutton of Newcastle-upon-Tyne, spending four years aboard tramp steamers, carrying coal to South America and bringing back grain.   He stayed with that firm until shortly before the outbreak of war, when he joined Shaw Savill as fourth officer in Waiotira.

Commodore Charnley and Commodore George Mayhew on the bridge of 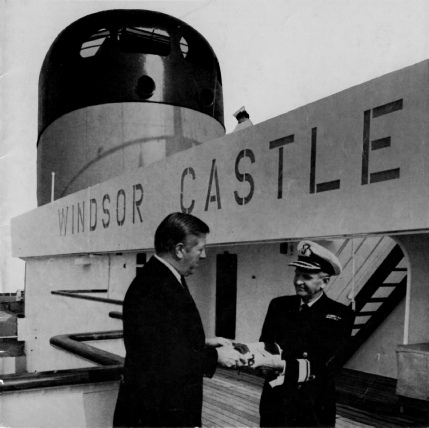 Receiving his Commodore’s pennant from 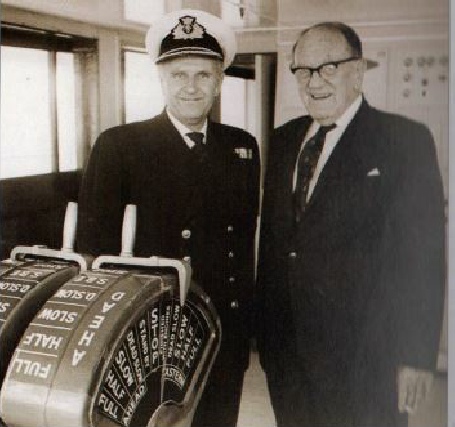 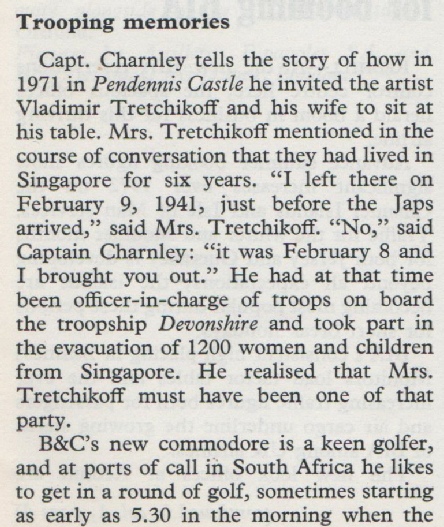 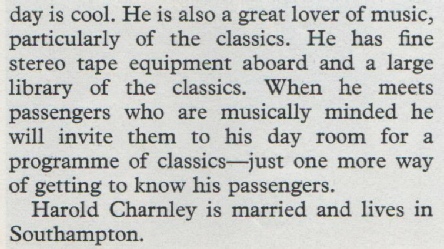 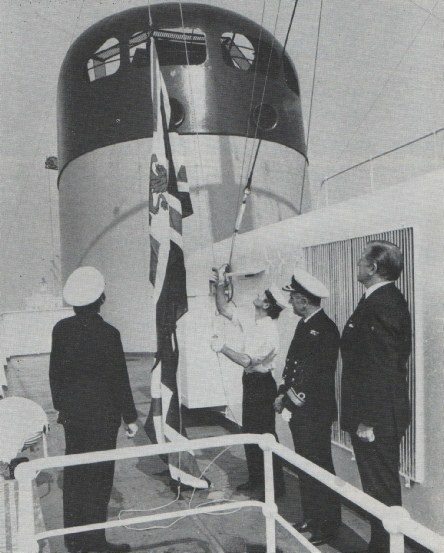 I sailed with him quite frequently and came to be known as one of "Chuckles's" men.

I first met him when i was cadet and he was on one of his early commands on Constance Bowater.

I like to think that he asked for me to sail with him as I was an officer that could be relied upon during the night but I suspect it was really that we shared a passion for golf and would nearly always sneak off in Port Elizabeth and play at Humewood together. Whilst playing I was allowed to call him Harold...... (a secret I have never revealed until today).

He had a great love of classical music and always brought his hi-fi and record collection to sea. He was often found in his dayroom, music up full blast and Chuckles standing at a lecturn with baton conducting an imaginary orchestra.

I understand he died by his own hand in Durban a few years ago.

Is this the "Chuckles Charnley" I sailed with as Staff Commander on the Windsor Castle about 1964ish.( Wife is no help on this one, she can't remember the year either ). Every one in Union-Castle seemed to have a nick name.e.g. Swivel Eye Lloyd, Logger Lloyd, Windjammer Wilson, Happy Jack Wassell. It wasn't only the men. We had a Patsy The Nipple, a Titsallina, a Tattyhead. Very few were complimentary.

Commodore Charnley was always known as Chuckles, although very professional he could always see the funny side of a situation.

He was held back being promoted to Master until quite late in his career. (something to do with a lady passenger on Kenya Castle if memory serves me right) I think the lady in question went on to become the second Mrs Charnley.

I recall that he was Chief Officer on Kenya Castle and Windsor Castle for a long time before rising to Staff Commander on Windsor Castle. Thereafter his promotion to Master was rapid and he quickly worked his way up from cargo ships back to the mail ships. Ending up as Commodore on Windsor Castle.

I sailed with him for about a year in PENDENNIS CASTLE (I was 2nd R/O) On inspections, he always jokingly asked if I declared my ship model proceeds to the taxman. One voyage, I was involved in making clear plastic paperweights for his wife who sold them to passengers. They contained small radio components such as transistors, capacitors, resistors etc. At he end of the voyage he brought me my "pay" in a brown paper envelope. Smirking insolently, I asked if his wife would be declaring the proceeds for tax - he never asked me again, but I am sure he saw the funny side of it!

I joined Union-Castle as a Cadet at the same time as Tony Thurgood on the "Roxburgh Castle" in Tilbury. We sailed with cars and buses for South Africa. This was the deadline to sail with completed vehicles to the Union. After this date a vehicle had to be built in South Africa. The Captain was J.D.B Fisher, Mate Harold Charnley. 2nd mate John Cutcliffe and the third went by the handle of “Bullshit” Kenshole. I cannot remember his christian name.

Charnley was known as “100% Charnley”. He never made a mistake!.Our second trip on the same vessel Charnley was very excited - since his mother in law had moven in with them. At my tender age I did not think that this was a good idea and told him so !

Charnley was upset with me and explained that he and Ivey would now have great freedon since they had a built in baby sitter. They had a young daughter of around four.

Charnley had nightmares. He would awaken and rush out on deck shouting "wait for me" He dreamt that the crew had left him and taken off in the lifeboats. His Doctor said that he should get a shore job. All the jobs that he wanted were in Africa. Ivey however was very happy in Southampton with her mother and refused to leave the country.

Harry being the gentleman informed Ivey that he would not be returning home after the next trip, but would allot Ivey an allowance to pay bills and mortgage. Mother in law got Ivey a Lawyer. So when Harold got off the ship he went to his Bank and found that he was worth 3 Pounds. Ivey had stripped his account and he had to find accomodation at the Salvation Army.

His Lady friend, when appraised of his circumstances, phoned her husband and asked him to send money or a ticket back, which he did . Harold haunted the house and the police drove him off. The result was that the alimony was high and ULS kept him on shore staff until he could resume duties on a ship and no longer had suicidal tendencies.

The next Lady that he lived with had a home in the New Forest and had him take driving lessons and gave him the use of her Vauxhall car. Whether they married or not I do not know.

We sailed together on Arundel Castle. Later he was First and I was Third. Tony Dyer the Assistant Purser had a record player in his room and Charnley and I would go and listen to classical music on LP's that Tony and I owned - prior to the evening meal . Tony would provide a cider to each enthusiast in the room. 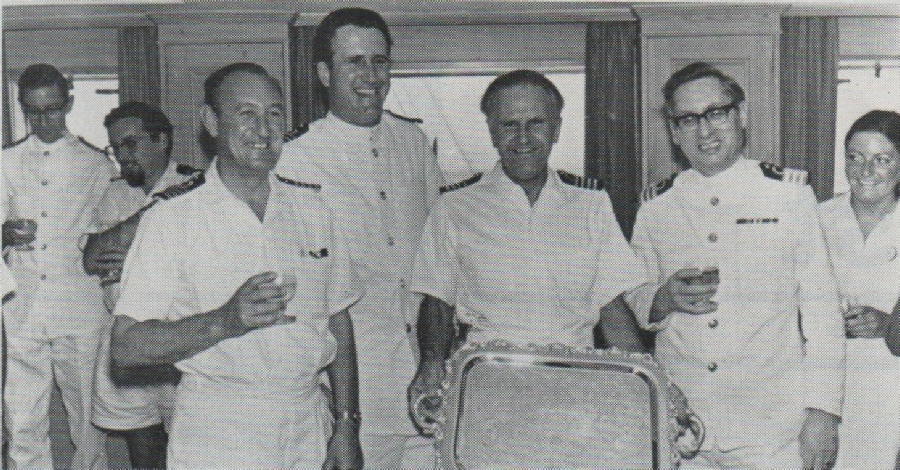 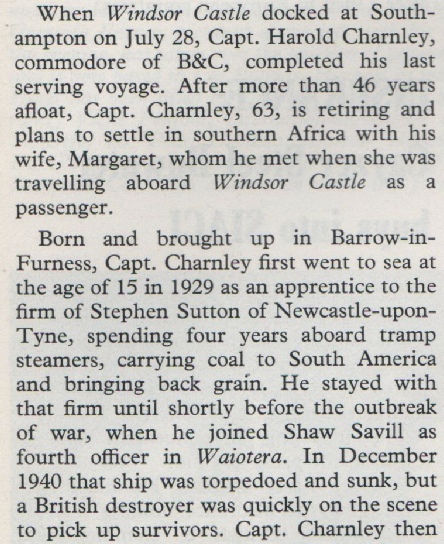 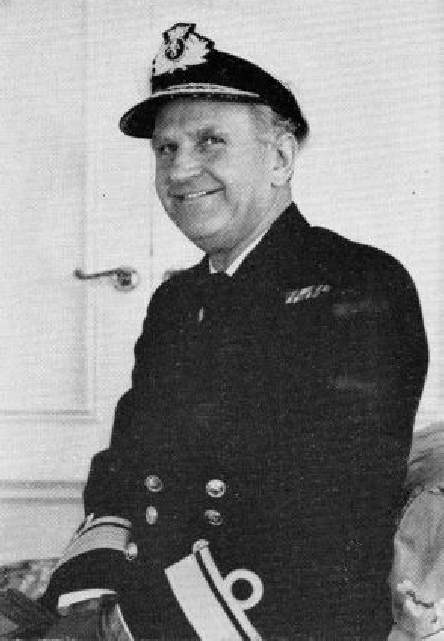 In December 1940 that ship was torpedoed and sunk, but a British destroyer was quickly on the scene to pick up survivors.   Capt Charnley then joined Bibby Line and was involved in the evacuation of Singapore in 1941.

In 1942 he joined Union-Castle as fourth officer aboard Capetown Castle in which he served for five years. There followed a period of 10 years during which he served in a variety of vessels; then in 1957 Capt Charnley was appointed chief officer and quick promotion came his way.

In 1965 he was given his first command, Margaret Bowater, the fruit ships Roslin and Rothesay Castle, then of Good Hope Castle.   In September 1970 he took command of the passenger liner Pendennis Castle and moved to Windsor Castle in March 1973.

His appointment as Commodore of the British & Commonwealth Shipping fleet was made the following month. 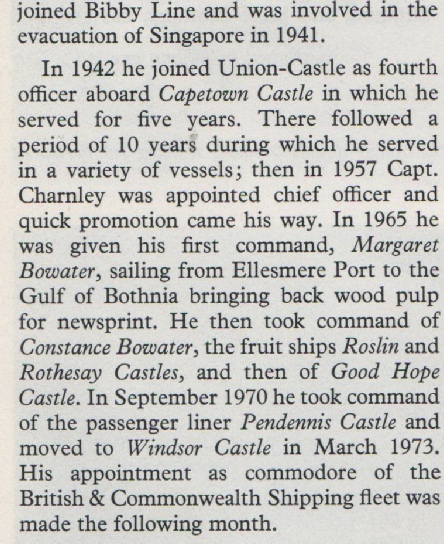