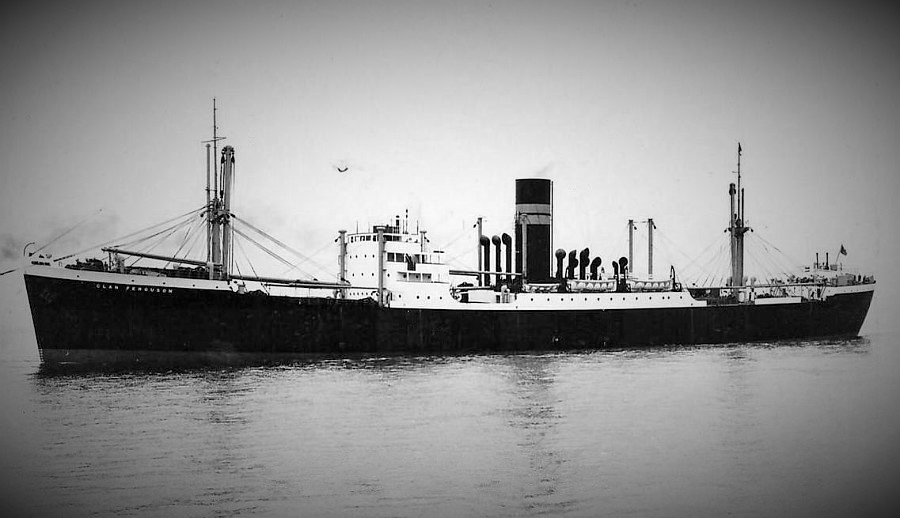 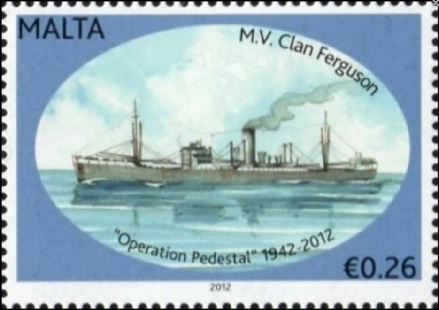 In August 1942 whilst on an “Operation Pedestal” convoy voyage, under Capt F S Lofthouse. from R. Clyde to Gibraltar and Malta, she was sunk by aircraft launched torpedo, 20 miles north from Zembra Island, Tunisia with the loss of 11 lives.

“Operation Pedestal” needs no introduction here, but it is worth recalling the bare facts: of the 14 merchantmen that set out, nine were sunk, including Clan Ferguson, and three damaged, while the Senior Service lost an aircraft carrier, two cruisers and one destroyer, as well as having another half a dozen ships damaged.

For the likes of Arthur Black, aboard Clan Ferguson, the moment of truth arrived on Wednesday 12 August 1942, when his ship was hit by an aerial torpedo off Zembra Island and blew up in a spectacular fashion.

Peter Smith takes up the story in his history,

‘A colossal explosion took place which led all who witnessed it to believe that she had blown up without survivors. The sheet of flame which followed set fire to the after part of the vessel and she began to rapidly settle by the stern. Many of the lifeboats were set on fire but most of the crew managed to get away on rafts, some using their steel helmets as paddles to get away from the blazing fuel on the sea.’

Watchers aboard the nearby Waimarama had seen firstly the Empire Hope struck by aerial missiles on their starboard beam, and then off their starboard bow the Clan Ferguson was likewise hit. Small wonder then they felt that enough was enough. An eyewitness recorded later:

‘We hauled out of line after this. I saw a terrific burst of flame, half a mile high, shoot up into the air. I cannot imagine how any of her crew escaped but soon after we heard shouts in the water. We could not risk the ship going too near the flames and were obliged to proceed.

I did not see any escort standing by her so do not think that there could have been any survivors from her. We continued at full speed keeping inside territorial waters to avoid mines laid outside. For a long time the Clan Ferguson could be seen burning furiously and we saw several ships silhouetted by the light from her.’

Despite the violence of the explosion many of her crew did in fact survive. Her Second Officer, Mr A. H. Black, gives a graphic description of those moments:

‘I could see the flames coming up from the engine-room skylight and the ship's side. The hatch covers were blown off Number Four Hold and two landing craft stowed on top were also blown off. Of the ship's four lifeboats, Number Three Boat was destroyed and all the others except Number One Boat caught fire. Three rafts were got away. There was a violent explosion in Number Five Hold and the ship appeared to sink about seven minutes after being hit. The oil blazed on the water for forty-eight hours and petrol cans kept floating to the surface and catching fire, as did the oil, causing thick black smoke. In all sixty-four men got away and were eventually equally divided on the four rafts which drifted apart.’

A very gallant act was performed by Midshipman Allson, on his first voyage. Reaching a small raft, he pushed it along in front of him and helped several badly burnt men aboard. These he later transferred to a larger raft. Their blazing vessel drifted away leaving them alone save for the fading sounds of battle ... ’

Black, who was picked up in one of his ship’s rafts by the Italians and temporarily interned in Tunisia, returned to the U.K. at the end of the year and finished the War as a 1st Mate of the Samdon. Post-war he remained actively employed by the Clan Line until taking early retirement in January 1951. 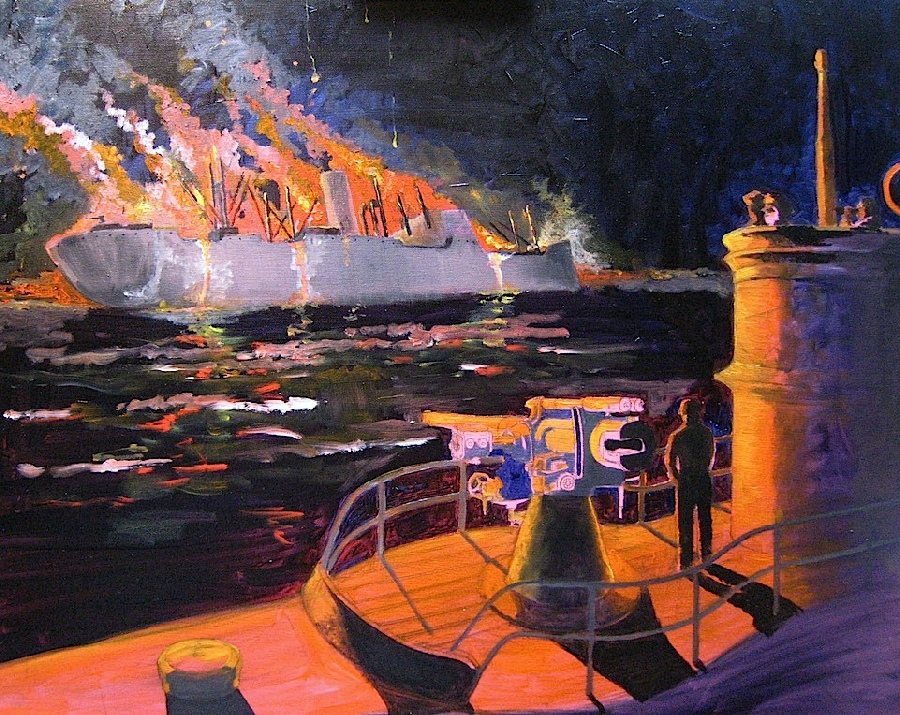 The lead aircraft was hit as it released its bombs. The bombs scored direct hits, setting off ammunition in Clan Ferguson hold.

Flame and debris flew half a mile into the sky leaving a ring of flame on the water and a mushroom cloud above the ship.

The explosion was so intense that the two following Junkers were destroyed by the blast.

Clan Ferguson was now dead in the water and burning fiercely.

At 11:28 pm the Italian submarine Bronzo saw her drifting and blew her bows off with a torpedo.

The No. 5 hold exploded in a column of flame and smoke and she sank to the bottom.

All lifeboats except No.1 had been blown apart or set on fire.

Fifty men escaped on the one remaining lifeboat, while the remaining survivors shared four life rafts.

10 men died or were lost in the explosion.

At daybreak on the 13th, 32 men were rescued by a German flying boat.

The next day, an Italian Red Cross plane landed beside them, taking seven injured men to safety.

The rest rowed ashore, landing in Tunisia on the 16th, where they were interned by the Vichy Government. 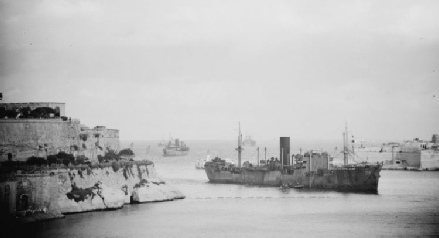 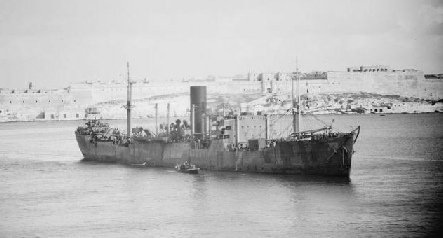