From My Life at Sea by Commander W Caius Crutchley

Our skipper was named Jeffries, a curious compound, who did not make friends easily, but where he did, stuck to them.

I should like to tell many stories about him, but refrain.

His great hobby was whist, and he played a fair game, but his main fault was that he had little tact in dealing with awkward people, and this on one occasion, coupled with his having also a tactless chief officer, led to a lot of reckless young passengers throwing overboard a great portion of his cabin furniture, including various embroidered covers by which he set great store.

I personally got on well with him, and I adopted when my time came many hints that he gave me as to various duties that the officer of the watch should perform. 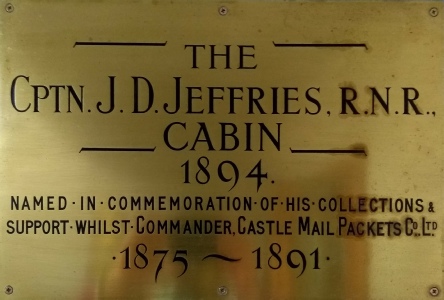 Probably taken from their previous home in Kent when they moved out.