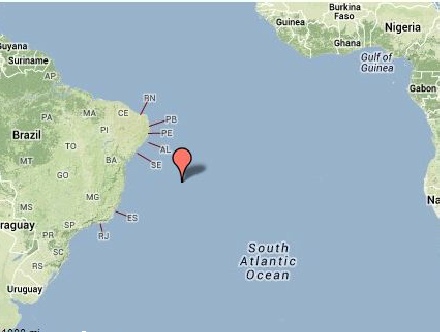 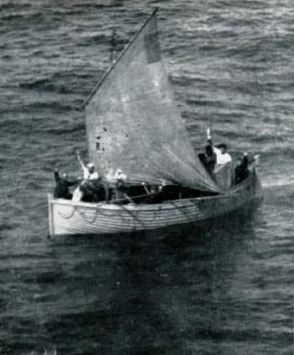 A log of this voyage was kept by the Chief Officer Edward Martyn.

The following tale of her sinking is taken from Bernard Edward’s fine book: 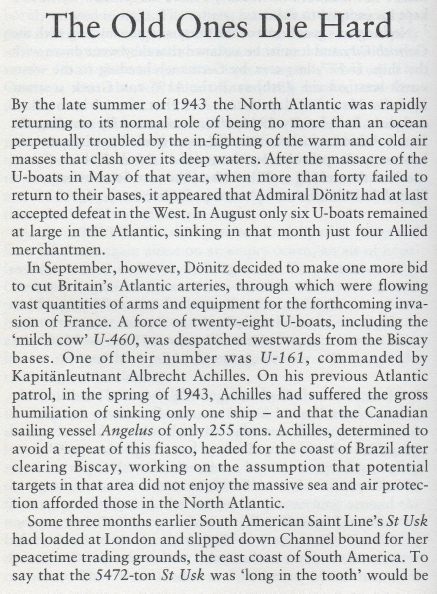 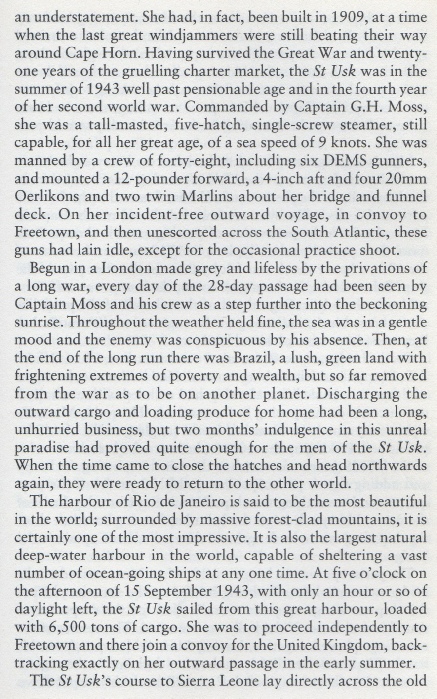 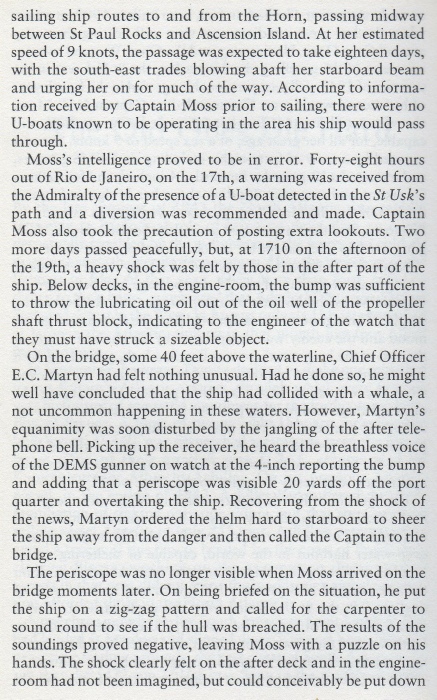 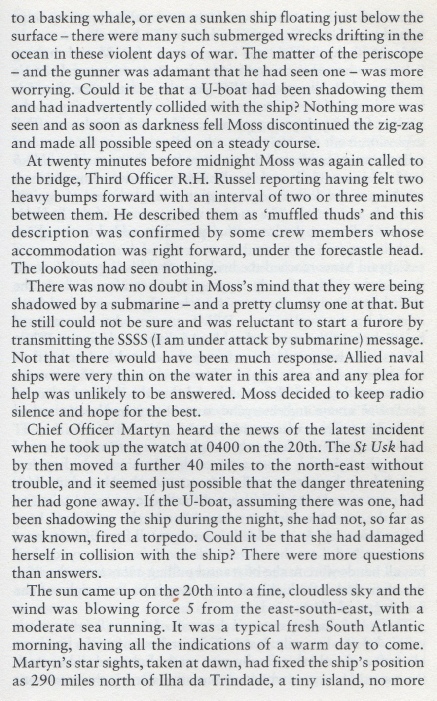 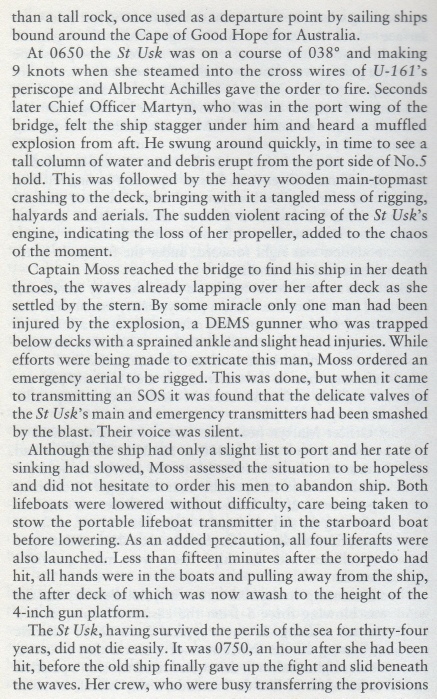 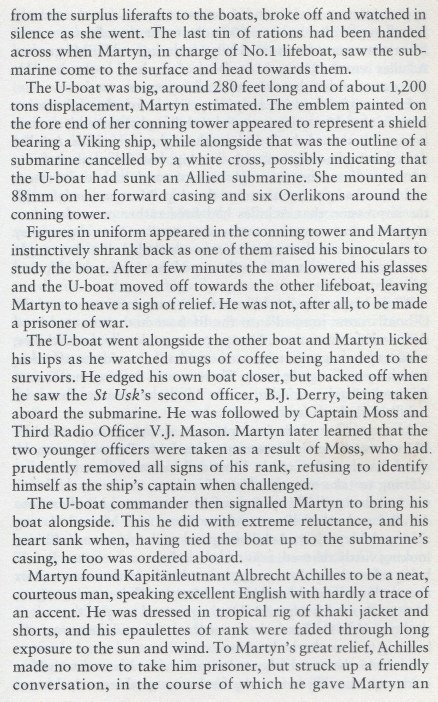 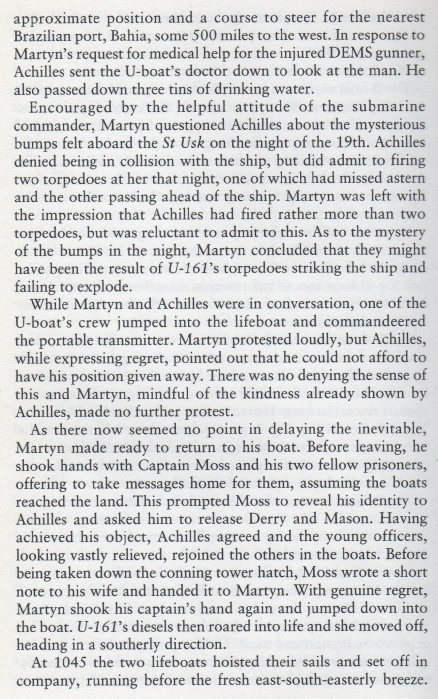 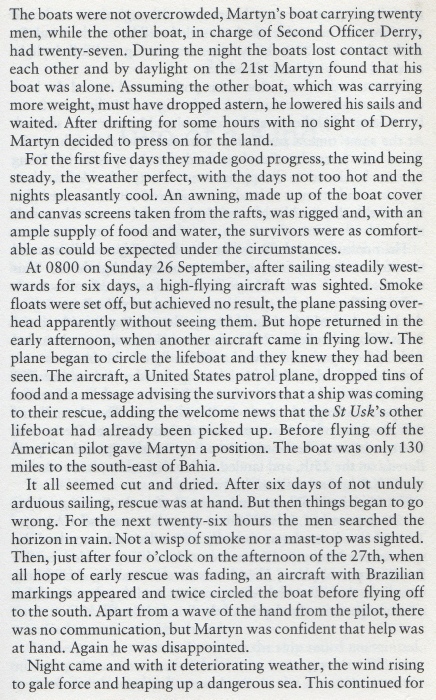 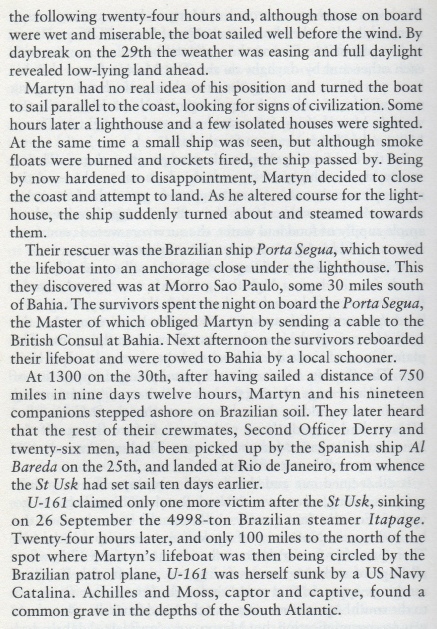 Various Saint Line Staff are mentioned in the article. More information can be found on their own pages:

Torpedoed and Sunk in The South Atlantic - 1943

At 10.50 hours on 20 Sep 1943 the unescorted St. Usk (Master George Henry Moss) was hit on the port side aft in #5 hold by one torpedo from U-161 while steaming on a non-evasive course at 9 knots about 240 miles north of Martim Vaz Rocks. The explosion blew the hatches off the hold, smashed derricks and either broke the shaft or carried the propeller away as the engines raced violently until they were shut down. The after end flooded rapidly and settled to deck level in a few minutes. The crew of 42 men and six gunners (the ship was armed with one 4in, one 12pdr and four 20mm guns) abandoned ship within 15 minutes in the two large lifeboats carried aboard. No distress signals were sent because the main-topmast with the main aerial came down and fell over the emergency aerial, but a wireless set was placed into the starboard lifeboat. The boats could be lowered without difficulty in moderate sea and fine weather as the ship only had a slight list to port. The survivors had released four rafts before leaving in the boats and then collected their stores before the ship sank by the stern at 11.50 hours. The only casualty was one of the gunners who suffered a fractured skull.

Shortly afterwards the U-boat surfaced and went to the boat in charge of the master, taking him, the second officer and the third radio officer aboard for questioning and handed hot coffee to the remaining survivors. The chief officer who was in charge of the second lifeboat was also taken aboard and Achilles apologized for sinking their ship before questioning them. The Germans drew their current position and the course to Salvador da Bahia on the maps carried by the survivors and when asked for extra water they filled two tins and placed them in the boats, but also removed the wireless set to prevent them to report the position of the U-boat. The chief officer asked the commander about some bumps and thuds felt aboard at 21.10 hours and 03.27 hours before being torpedoed and he confirmed that they had attacked their ship with one torpedo that missed astern and a spread of two that missed ahead due to the zigzag course steered by the ship that was discontinued during the night. The injured gunner was dressed by the German doctor who then took photos of the survivors in the boats together with several other crew members. The master who was not in his uniform had not disclosed his identity at this point, but when the U-boat commander told them he would keep the other two men taken from his boat as prisoners aboard he declared that he was the master in order to save the two young officers from captivity. He wrote a message to his wife and handed it to the chief officer before being taken down into the conning tower. The other three men were allowed to return to the boats and the U-boat then left the area, but the master was lost when U-161 was sunk one week later.

At 14.45 hours on 20 September, both lifeboats set sail together but the boat in charge of the chief officer held 20 men and the other 27 so it outsailed the heavier boat soon and they lost contact the following night. The weather was perfect for sailing and they made good progress. On 25 September, the 27 survivors in the motor boat in charge of the second officer were picked up by the Spanish steam merchant Albareda and landed at Rio de Janeiro three days later. Brazilian and American patrol aircraft were sent out to find the other lifeboat and it was located about 135 miles south-southeast of Bahia at 18.10 hours on 26 September. Juruena (CS 54) departed Salvador da Bahia to pick up the survivors but returned to port the next day after failing to find them. A Brazilian aircraft spotted the lifeboat again in the evening of 27 September, but a thunderstorm prevented any further rescue operations. At daybreak on 29 September, the boat reached the Brazilian coast after sailing some 750 miles in nine and a half days and followed it until spotting the lighthouse of Morro de São Paulo about 30 miles southwest of Salvador da Bahia. Shortly thereafter they were passed by the Brazilian coaster Porto-Seguro which towed their boat into an anchorage and took the survivors aboard. They remained there until the following morning when a Brazilian schooner towed the lifeboat to Salvador da Bahia, arriving in the afternoon of 30 September. They were then all flown to Rio de Janeiro to join the remainder of the crew and were repatriated aboard the British passenger ship Highland Monarch. 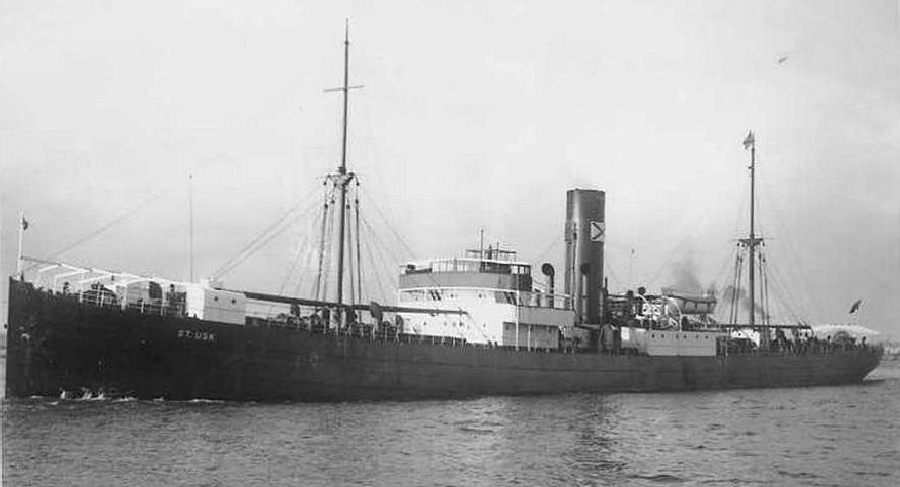 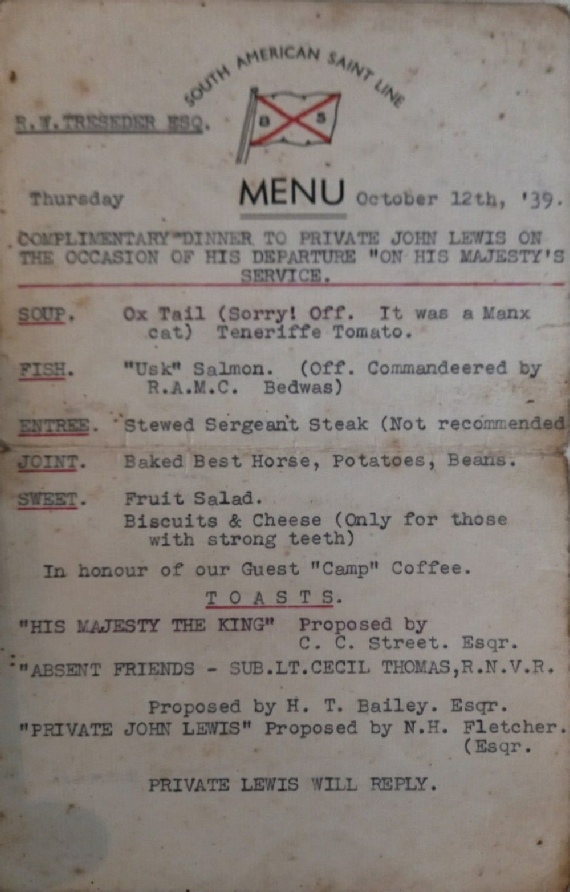