Fifeshire SS was a British Cargo Steamer of 5,672 tons built in 1898 by Clydebank Engineering & Shipbuilding Company, Yard No 332 for Elderslie SS Co Ltd (Turnbull, Martin), Glasgow. She was powered by a steam triple expansion engine giving 12 knots. In 1910 she was acquired by the Scottish Shire Line Ltd. The liner Fifeshire left Melbourne toward the end of July, 1911 for London with three fi rst class and 33 third class passengers.

She called at Adelaide where she embarked another four passengers, the total number of persons on board when she left for England being 105. On the night of August 9th the liner was 20 miles S. of Cape Guardafui, near Aden, when at 10.30 p.m. in fine but hazy weather she stranded in about four fathoms. There was no loss of life occasioned by the stranding and next day the captain sent one of the lifeboats under Mr. Woods, the first officer, with five seamen to obtain assistance. Unfortunately this boat ran into a gale which swept her some 250 miles from the scene of the wreck and she was picked up five days later by the s.s. Ardandearg with her occupants at the point of exhaustion. Meanwhile the position of the Fifeshire was decidedly uncomfortable as the seas were punishing her to a dangerous degree.

The captain therefore decided to abandon her and four boats under the captain, second, third and fourth officers respectively were got away with all the remaining people. The last boat left at noon on the llth and during daylight they managed to keep fairly near to each other. On the next morning, however, the captain´s boat was alone, the second officer´s boat which was nearest, having disappeared, and the other having been picked up by the Messageries Maritimes liner Adour. Later the same vessel picked up the captain´s boat, but the second officer´s boat could not be located. A search by the Italian warship Volturno and the Indian Marine vessel Dalhousie failed to find any survivors and the boat had to be given up as lost. The number missing was 24, of whom ten were passengers. 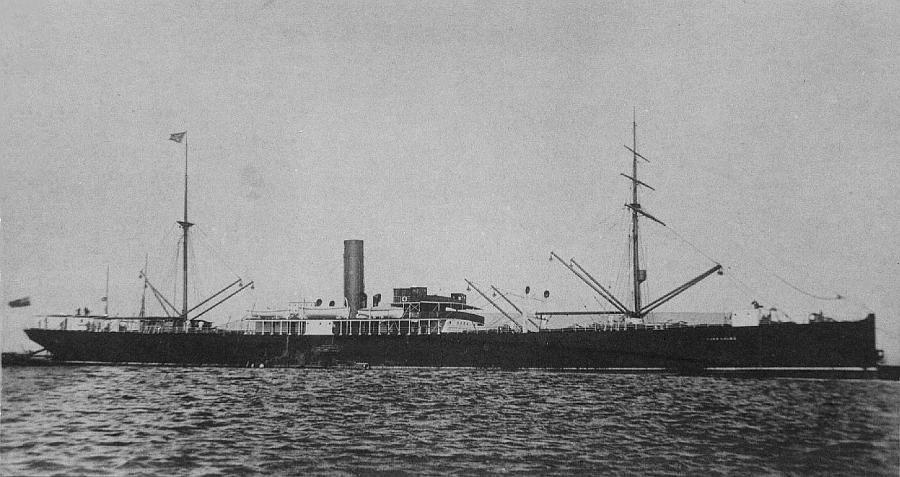 The s.s. "Fifeshire " was stranded 20 miles south of Cape Guardafui on 9th August, 1911. Her port of departure was Adelaide, and she was bound for London.

There are two possible counts against the master: (1) Omission to use the lead when admittedly within soundings, and (2) leaving the third officer on watch when land was expected at any moment.

The master overnight, on the 8th instant, had given orders for the lead to be cast early next morning. The reason for doing so was in case the vessel had experienced an abnormal current during the night that might possibly have set her into soundings. Yet after 7.11 p.m. on the 9th, after he had taken a star bearing and knew he was within 24 miles of a headland 2,900 feet high, he took no soundings. The haze was the cause. This the third officer on the bridge at 8 p.m. admits, and yet the bright moonlight seems to have deceived him and the master also. The third officer says, " The moon shining over the mist made the aspect quite clear," and the master asserts the weather was quite clear, clear to the horizon, while the fact of Ras Jard Hafun being invisible the master attributes to clouds which do usually at night envelop such heights. He had throughout the day, to the best of his judgment, allowed for the northerly set, and had altered his course from time to time to meet this set, but I agree with the assessors that he did not realise the density of the haze, nor did he get the northerly set he had allowed for.

Again, though he knew he was in soundings, it appears that although the idea of taking soundings may have presented itself to him, the master did not think it necessary owing to the distance from shore; the land being invisible, though the weather was said to be quite clear; the haze (which according to the " Red Sea Pilot " is usually here " thickest " in the lower strata) being admitted on all hands to be absent; and, lastly, owing to the fact that his course was being adopted to the northerly set, which, as events proved, did not come up to expectations.

It may rightly be said that the master omitted to use the lead, but there was no reason, according to the data before him, impelling him to do so. But I do not find he neglected to use the lead, and hence there is no criminality attaching to this omission to do so. The anxiety which prompted him on the previous night to order the casting of the lead the first thing next morning had vanished as the day of the 9th wore on, for at 6 a.m. on this day the use of the lead assured him that his course and distance has been correctly gauged, and this gave him confidence in his judgment.

As regards count 2, his absence from the bridge. This Court does not think it can be said that the safety of the vessel required the master's personal supervision. He went below after 8 p.m., ordering the third officer to call him when land was sighted. It is possible he believed land would shortly be sighted; but what with the presence of the officer on watch, the helmsman, and the look-out man in the crow's-nest-the third mate whose statement goes to prove he was thoroughly alive to the necessity of keeping his " eyes skinned " and using his night glasses-and looking, moreover, to the assurances in his own mind as to his course being a correct one, this Court fails to find that the master's presence on the bridge was essential.

As to the " smell of the land," the master seems to think the third officer's nose should have scented land in the proximity. The master has only sailed this course once before some thirteen years ago. The assessors are unanimous, after a long experience of these parts, in saying that the mere smell of sea-weed is not indicative of the nearness of land. The third officer had on previous occasion experienced this smell one and a half days before making land. The Court finds that the " tang " of the land from the sea is not an important fact, and of itself was no danger signal.

The Court finds the statement of the third officer straightforward and sincere. He did all he could in the circumstances. The Court attached no importance to the hearsay remarks which occasioned the recalling of the third officer on the 25th instant and the putting to him certain queries as to his being in doubt of the haze which might have prompted him to call for the captain. This third officer's own statement is clear, viz., that his original belief in a haze was corrected by the bright moonlight which made him to believe the outlook was clear, and this his aspect of the case is corroborated by the master.

Everything was done to get the ship off, and abandonment was ordered when the safety of the passengers and crew demanded it, and not till then. Every care was taken by the steward, under the master's orders, to adequately provision and water the boats, and forethought was exercised in providing for the comfort of the women and children.

Agreeing with the assessors, this Court is of opinion that the masters and officers did not realise the density of the haze (it completely fooled them, in other words), and the northerly set the master had expected he failed to realise.

This Court looks to the work put in by the master, which, according to his light, sees to exculpate him and officers of any wrongful act or default in term of Section 9, Act V., of 1883. This Court finds, however, "an error of judgment," which, in the words of Mr. Norwood's evidence before the Royal Commission of 1873, is " really and fairly a sea risk." This Court finds no "gross carelessness," and while admitting that " an error of judgment " may be culpable, sees no culpability attaching to the present case.

Opinion of the Nautical Assessors.

We, the undersigned nautical assessors, called to assist at the Inquiry into the circumstances attending the stranding of the s.s. " Fifeshire " on the night of the 9th August, 1911, south of Guardafui.

We are of opinion that the stranding was caused through the captain and officers not realising the density of the haze and not getting the northerly set that they had allowed for.