My father requested that I should be sent to the least favoured of the Company's vessels as a very new cadet, one of the 'perks' of Company employees being that they could unload their offspring without the preliminary expense of going to a training ship.

Built as the "Empire Wilson" Union-Castle purchased five war built ships for £2M the lot, the war fittings, i.e. gun tubs and rafts were removed but other than a splash of paint Union-Castle saw no reason to spoil us with any other changes.

Accommodation was best described as 'Spartan', when built the life expectancy was short so nobody saw any reason to fit the ship out with anything but the most basic of requirements - a policy continued with enthusiasm by Union-Castle.

The accommodation was infested with cockroaches, every draw, every cupboard, every nook and cranny was teaming with them.  At one stage we had a total of fourteen cats on board - and the ship was still over run with rats.   I know because one died in my sea boot, only discovered when the pong became overpowering.

She was a hard working ship, with sixteen derricks and three heavy lift derricks, 30, 50 and 80 tons outward bound was fully occupied with overhauling all the running gear.   Cleaning holds was after discharge a never ending job, cleaning bilges a cadet speciality!

The "Kenilworth Castle" was the 'odd one out', almost all of her class, and their were a great many of them, were steam turbine powered but not the "Kenilworth", for some inexplicable reason (most likely the only engine available at the time) she was powered by Doxford's 6 cylinder diesel.   If nothing else a quite spectacular engine when entering or leaving port.   Very reluctant to start, when it did it was with a truly splendid display of smoke rings and much squirting and belching from the engine room.   The chief engineer would have been amazed if the 15.5 knots was ever achieved, on a good day with following wind and tide 14.5 was the maximum she would have done.

But those five ships earned the Company more money than the mail fleet, I was told in the accounts department in Fenchurch Street (Bleak House) that the profit from the first ship's voyage paid for all five ships.

The "Kenilworth Castle" was sold for scrap in 1967, built to last just three voyages (the average life of a cargo ship in 1943) she went on for 23 years, not bad at all.

There were a great number of us sorry to see the old ship go, not least myself. 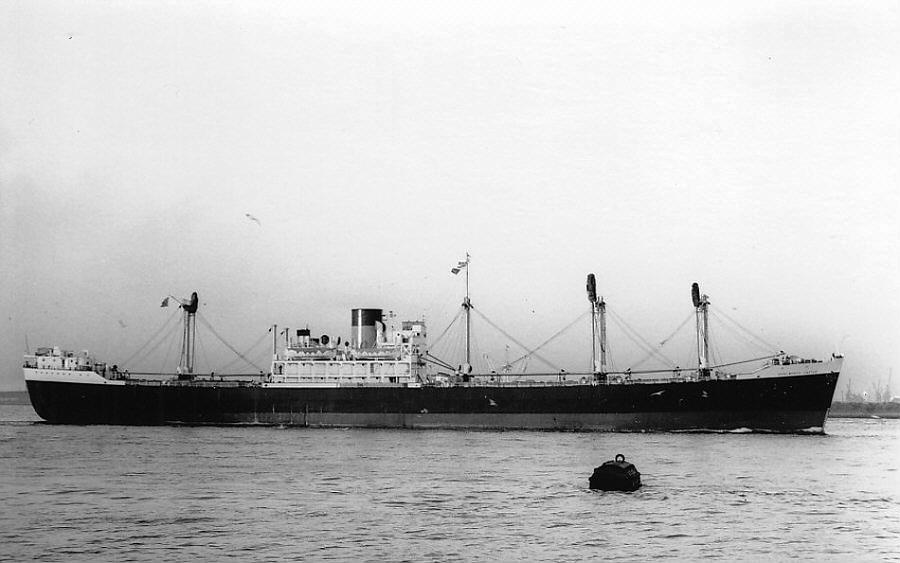 She was built for the Ministry of War Transport as the Empire Wilson with Union-Castle as managers.

Acquired by the company in 1946 she was renamed Kenilworth Castle and given a lavender grey hull and a short funnel.

On 4th June 1968 she arrived at Hong Kong where she was broken up. 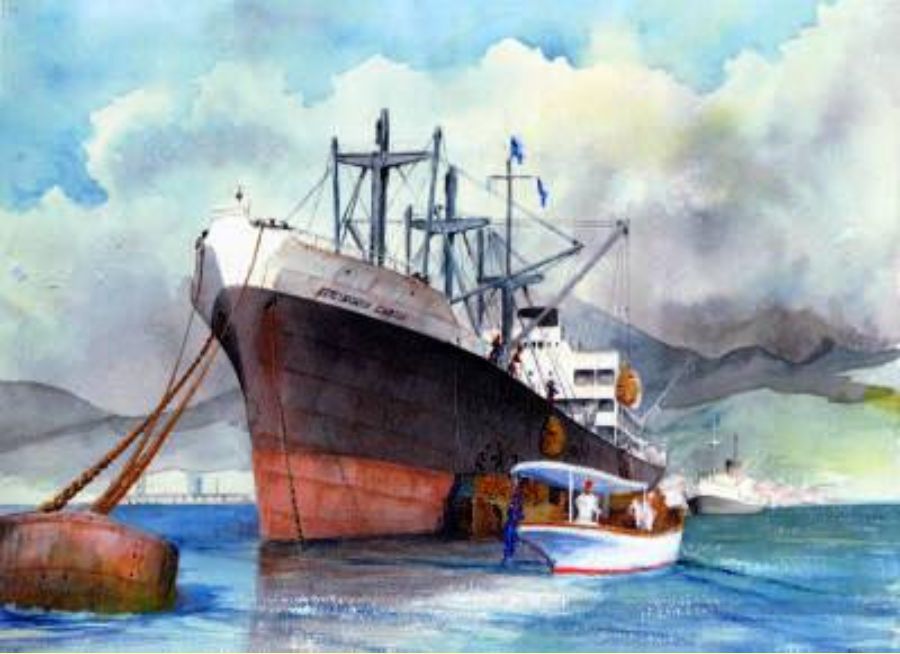 A watercolour by Owen Keen 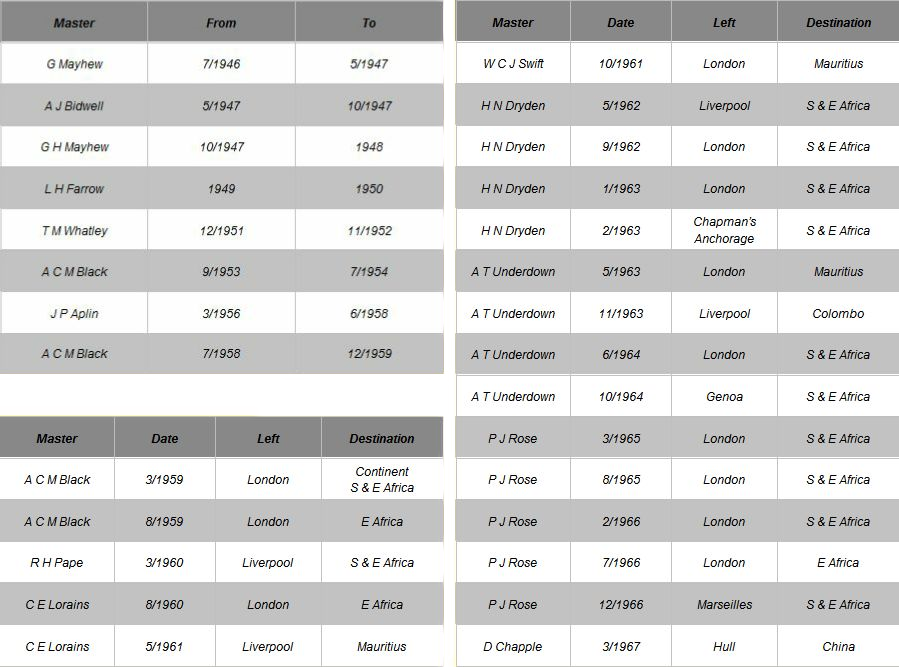 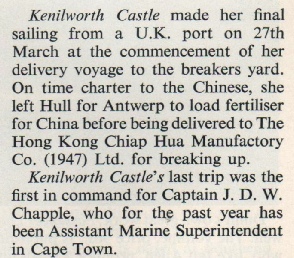 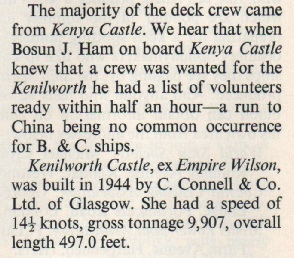 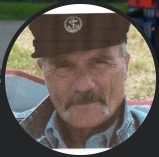 My only claim to Union-Castle fame is a double header round Africa via the Meddy, Gib and Genoa, from and to London on the ancient rivet popper Kenilworth Castle, ex Empire Wilson, built as a heavy lift ship with three jumbos, as E.D.H. 12th. July 66 to 4th. March 67.

Some good memories of that voyage avoiding both the seamans strike and the Arab Israeli war more by luck than judgement. The first time around via the canal we stopped briefly at Port Sudan where you had to walk thru the grounds of the local military Fort to get to the mission to mail home etc. Those soldiers had big natural Afro hair and carried slung rifles while walking in pairs holding hands, honest i was  stone sober, and it wasnt a mirage, they just did.! Often wonder if Dads Army scriptwriters got Corporal Jones " Fuzzy Wuzzys" who quote..." Dont Like it Up Em".... unquote, from a similar experience? Guess we,ll never know.

Anyway we  visited almost every East, South, and a couple south west coastal ports twice over on that memorable voyage and I’m fairly sure it was the Kenilworths last big trip, she was scrapped soon after i believe, she even popped a rivet in our cabin, on the way home, she was double berthed, luckily on the inboard bulkhead.

We also suffered some pollution of our water supply on the way home that too I believe that was also a rivet thing, the old girl was literally coming apart at the seams. Just a fraction of the adventures i had on that old trooper. 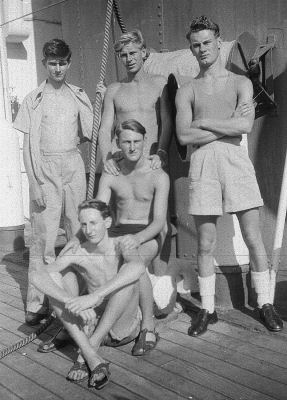