She was a tug built for service at Durban. For her delivery voyage she was rigged as a topsail schooner, the mast being removed on arrival. Coal was carried in wooden cattle-pen deck houses and the voyage took 45 days at an average speed which was similar to that of the Dane when she inaugurated the mail run in 1857.

In September 1894 she was lost on the bar at the port of Chinde at the mouth of the Zambezi River. 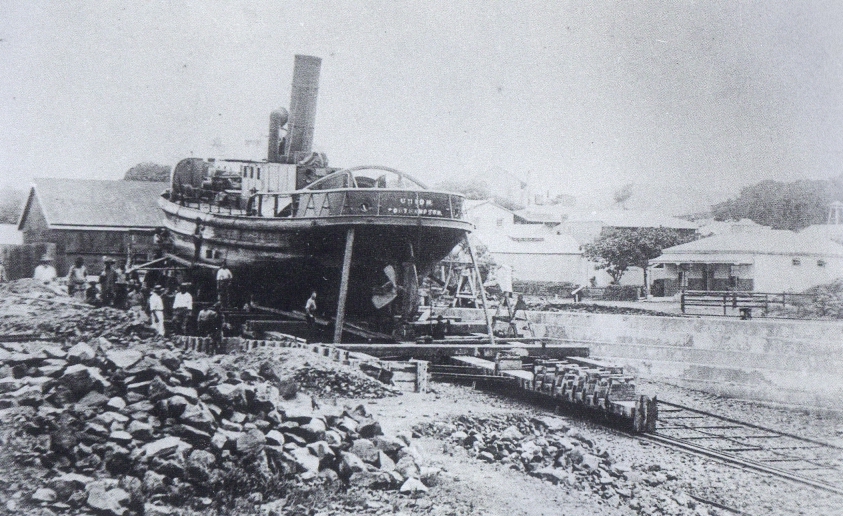 FINDING and Order of a Naval Court held at Chinde on the 11th day of September 1894, to investigate the circumstances attending the wreck of the S.S. "UNION," of the port of Southampton, when sounding the bar at the entrance of the Chinde River, East Africa, and the cause of such wreck, and to inquire into the conduct of the master of the said vessel.

The s.s. "Union" was a steam vessel of 64 tons register or thereabouts, official number unknown, of the port of Southampton. It appears from the evidence given before this Court, that the "Union" sailed from Chinde on the 1st September 1894, bound to survey the Chinde bar, with no cargo on board, but with a crew of 17 all told, including passengers.

The Court, having fully considered the evidence given in the above case, find as follows: On approaching the inner buoy on the afternoon of the same date, the ship "Union" was wrecked, owing to its being holed in the port bilge forward, and foundered, and became a total wreck. The Court, having regard to the evidence, find that the master, James Borwick, appears to have navigated his vessel in a seamanlike and proper manner, and when a casualty was inevitable had done everything in his power to avert it. That the crew appear to have conducted themselves properly, and used their utmost exertions to save the vessel. That proper discipline appears to have been maintained on board before and after the accident. That the ship's papers, register, and official log-book and articles all went down with the wreck and were lost, and that the s.s. "Union" appears to have been properly supplied with charts.

The Court specially desires to direct the attention of the Board of Trade to the fact that the position of the buoys on the Chinde bar is not to be depended upon.

The expenses of the Court, fixed at 3l. 6s., are approved. 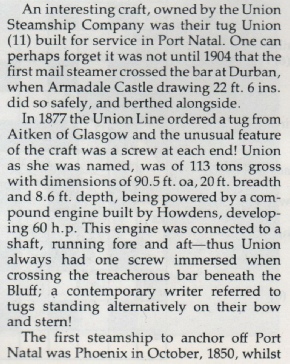 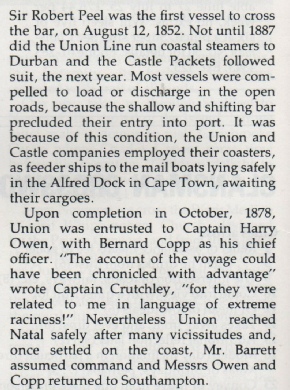 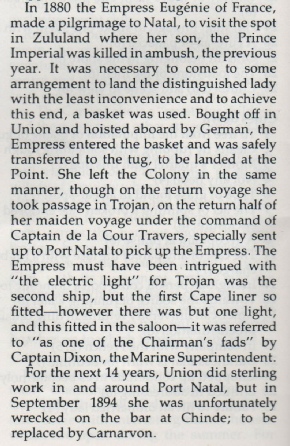 The tug Carnarvon was also fitted with fore and aft propellors

Why Fore and Aft Propellors?