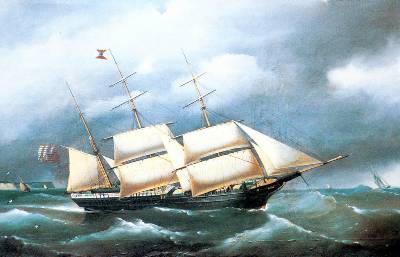 She was registered at Southampton for the Union Collier Co's proposed South Wales to Southampton coal service but in July 1854 she was chartered by the British Government for use during the Crimean War.

She was altered to accommodate 48 passengers and 250 troops. On 5th December 1856 she came under the ownership of the Union Steam Ship Co. Ltd but was laid up at Southampton.

In October 1857 she was deployed on the new speculative Southampton- Pernambuco - Bahia - Rio de Janeiro service with passengers and coal. She was sold to P & O in December 1858 for their Mauritius - Reunion mail service and during 1861-62 acted as a supply and accommodation ship at the building of lighthouses at Ashrafi and Daedalus in the Gulf of Suez.

On 20th February 1863 she was sold to Hong Kong Chinese interests for £2000 then sold on to Nagato Han (Chamber of Commerce) and renamed Otuushi Maru. In 1865 she was sold Satsuma Han with the name Sakurajima Maru and in 1871 came under the ownership of the Japanese Government with the same name operating their inter island mail service out of Tokyo which was highly unprofitable. The service was taken over by Yubin Kisen Mitsubishi of Tokyo in 1877 and became profitable.

In 1880 she became a store ship before being hulked and from then on there is no further trace of her whereabouts or her final demise.