She was built for the Port Nolloth - Cape Town copper ore service and was wrecked off Port Nolloth in March 1876.

What makes researching the "Namaqua" difficult is that there were two ships of the same name trading between Cape Town and the West Coast at the same time.

Union Line's Namaqua had a good reputation for speedy voyages, but like so many ships on the coast, came to an untimely end, the victim of the notorious West Coast fogs.

The same intrepid reporter would, six months later, make a similar 'on the spot' report upon the loss of Castle Line's "Windsor Castle" not many miles away to the south.

As with that report never could our reporter be accused of parsimony with words, one cannot but help feel the editor found filling his newspaper at times difficult, but the report from the 'Cape Argus' is of great value and interest, in its immediacy, description of Cape weather and what it was actually like sailing on these early coastal steamers.

The reporter was given passage on the Union Line's "Zulu", this is his first hand story. 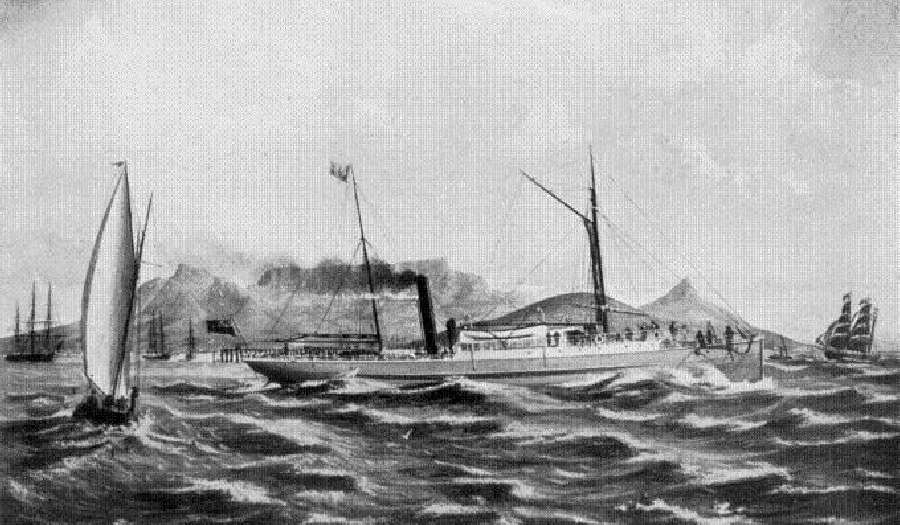 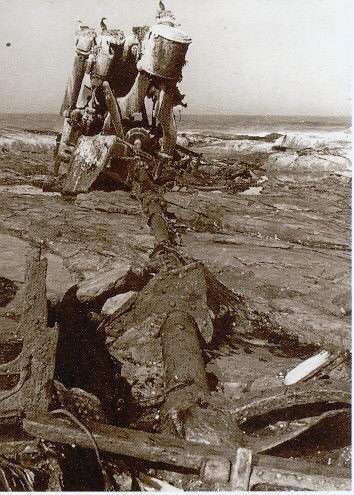 Part of Namaqua's engine and propeller shaft is all that remains of her.

Another item has been added to the long list of maritime disasters to which our shores can bear witness, and the Union Line's smart little steamer Namaqua commanded by a most skilful and careful captain, has had her career suddenly terminated by one of those lamentable and untimely accidents from which no seagoing craft are exempt.

The trade between Cape Town and Port Nolloth has for some time past, as most people are aware, been carried on by two steamers, both bearing the same name, but belonging to different owners - the one to the Union Company, and the other to Messrs. Jamieson and Co.   Both vessels have done good service and made some smart passages in their day; in fact, on her last trip, the steamer that has now been wrecked, went from here to Port Nolloth, discharged, re-loaded, and was back again in five and a half days.   She was a compact, well found little steamer, of between 200 and 300 tons burthen, and commanded by Captain Gibbs, who always proved himself a great favourite with passengers going to and fro on this route.   The Namaqua left the Docks on the voyage which was fated should be her last, about two o'clock p.m. on the 28th of March, with a cargo valued at about £2,100, some £400 of which belonging to Mr. Pilkington, of Hondeklip, was, as ill luck would have it, uninsured.   Mr. Dreyer, who had shipped £700 worth of merchandize, had only taken out his policy an hour or two before intelligence of the wreck was received in town, thus covering himself by a good stroke of fortune just in time.   Thr cargo, we understand, was for the most part insured by the Commercial, Colonial, and Equitable office, of this city.   Nothing more was heard of the steamer till Friday last, when intelligence reached town overland that she had been wrecked at three o'clock on the day following her departure, somewhere in the neighbourhood of Groene River, said to be about three hours ride from Port Nolloth, though this must have been a mistake.   We should add that there were only two passengers on board, Messrs. Perkyas and Coevendon.

The Union Company, without delay, resolved to send down the steamer Zulu to the scene of the wreck to render any assistance that might be required, and report generally on the state of affairs, the intelligence brought to town being, at the best, but vague and scanty.   the Zulu accordingly left the docks precisely at half-past twelve on Saturday, taking about a dozen passengers, including Capt Kerr, superintendent of the Union Company, a pilot, and a surveyor.   Had the notice been longer, doubtless very many more would have availed themselves of the opportunity, as everything augured well for a most delightful trip.   Even victims to sea-sickness might have contemplated it without any gloomy forebodings and uneasy misgivings that, after all the anticipated enjoyment might be unpleasantly marred by mal de mer.   The sea was calm and tranquil, masses of vapour hung lazily about the mountains and it was just one of those fine sunny days when the mere physical act of breathing seems to be a luxury and pleasure.   The Zulu soon shot out of the bay, and glided along coastward at a sharp pace.   No one who has made this trip looks for much that is attractive or interesting, on the contrary, it is as eminently dull and monotonous from a picturesque point of view as it well could be.   The coast, as seen from the sea, presents one unbroken series of low undulating hills, diversified here and there only by large patches of white sand.   Occasionally one sees a farm with a limited extent of cultivated land, but the steamer, with a due regard to her safety, keeps too far out to enable one to distinguish much more than the general contour of the country.   In the course of the afternoon two or three small cutters were passed, their crews looking somewhat aghast as they perceived the steamer bearing down directly upon them, the object being, if possible, to pick up any intelligence touching the wreck.   Two of these crafts, thus spoken, were from Dassen Island, laden probably with penguin eggs, and the third, a small schooner from Lamberts Bay, all of course in profound ignorance as to the Namaqua's fate.

Some years later the namesake of the Union Line's Namaqua was to suffer the same fate, however her master received more lenient treatment

The Board of Trade, London

The steamship "Namaqua," of Cape Town, 116 tons, while proceeding up the channel from the inner bar anchorage to her usual moorings at the southward of the Port Nolloth jetty, with the assistance of the licensed pilot, Quesnell, that owing to an unusually strong current took a sheer to starboard at a particularly narrow part of the channel, to the north end of the reef opposite the Yankee John Rock, the helm being put hard-a-starboard. The tug still towing ahead failed to straighten the ship, and she grated over a reef, causing her to leak so rapidly that she had to be immediately beached. The Court finds no blame attaches itself to the master, whose certificate is returned.

Wreck of Namaqua near Port Nolloth - 1876