In 1953 on Riebeeck castle carried first cargo of grapes after the war from South Africa to New York. Patrick St Q Beadon was 1st Officer.

One hold was specially monitored. After a very rough crossing there was a near fatality when the Americans put a petrol driven fork lift in the hold and carbon monoxide became trapped in the refrigerated hold.

Nearly ran out of fuel when on Rochester Castle and had to bunker in Beira.

On Capetown Castle I have to stop both main engines between East London and Durban when electrical power was lost to the cooling and lubricating pumps.

I remember a hot night lying off Aden waiting to bunker Tintagel Castle.

Having passed my Chief’s Motor Certificate, I asked to join a steam ship. I was appointed to Arundel Castle, not the easiest, it being so old.

Engineer in charge when Capetown Castle was in dry dock having two new propellers fitted. I had one Jnr Engineer and two greasers when the dock was being flooded. The bridge called down as they had no whistle for the tugs. Rushed up to the bridge and saw that the fuse had been removed so pulled the lanyard, which worked of course. The bridge staff and two Cayzers got a flowery dressing down. 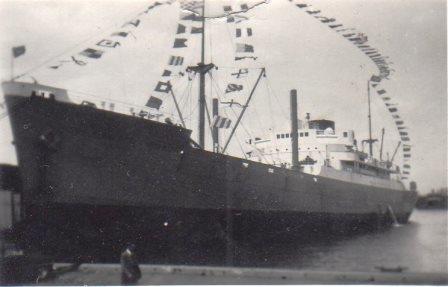