Sad to say but I have heard that Capt Patrick Beadon passed away recently. He was Master of Windsor Castle on her last mail voyage.

A very popular master with all who sailed with him. I did not sail with him but those of you who did may wish to add your recollections.I will relay them to the Union Castle re-union being held in the middle of May. 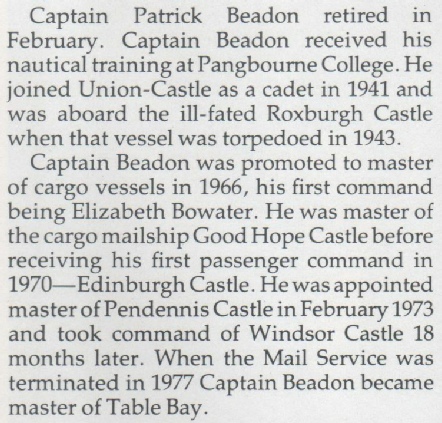 Travelled as passenger on the Pendennis Castle in 1966 under the command of P.St.Q. in 1966.

An excellent passenger ship Master. RIP and condolences to family and friends.

Remember him well, he was a staff commander on passenger ships and did his first trip as a newly promoted Master on the Nicholas Bowater 1967/1968,

I was R/O with him for the whole 10 months of that voyage after which he went straight back onto passenger vessels as Master.

A gentleman and excellent master to sail with, friendly but one who you always respected for his position.