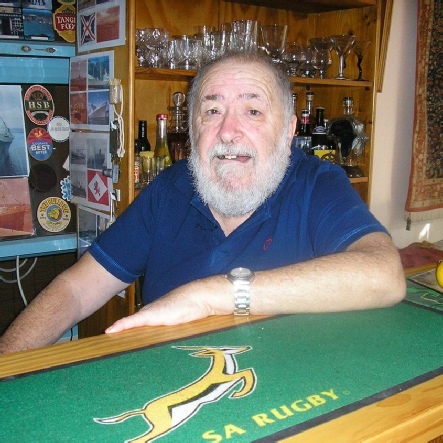 But we saw the world on that trip. 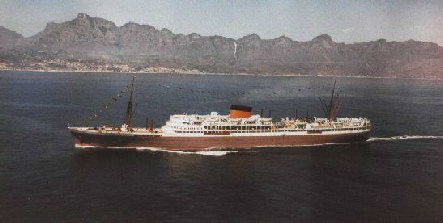 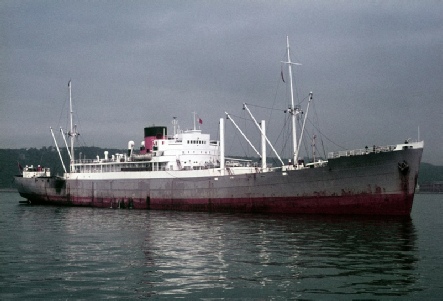 Enjoyed my trip on Stirling Castle so much,

She was a reefer ship.We went out to South Africa via East Africa with general cargo & back to UK with fruit. 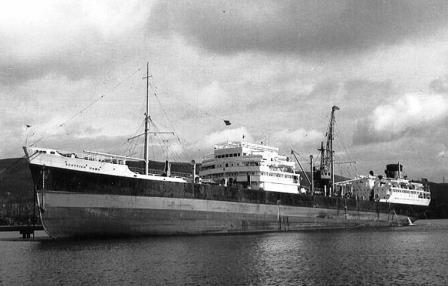 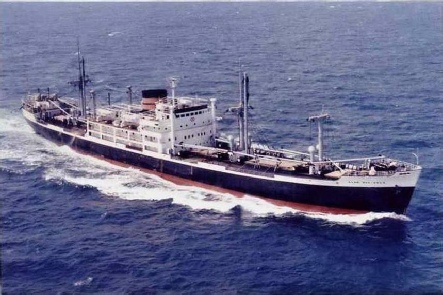 After Scottish Hawk I went to my first Clan line cargo ship in '65 Clan Maciness. Did 2 voyages one as cadet, then later as first trip third mate.

Both trips to South and East Africa. 2nd trip was brilliant as the officers were mostly in the old passenger accommodation which was very comfortable. 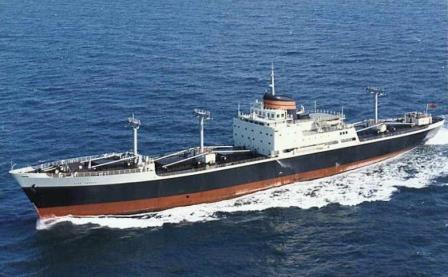 After Clan Macinnes I was sent on a 6 months Mid Appreticeship Course at Warsash and emerged as a senior cadet and sent to Clan Ramsay.

This was a stunner, fully automated and fully air-conditioned. Heaven!

Her run: Taking fruit from SA to Europe. Loved it! 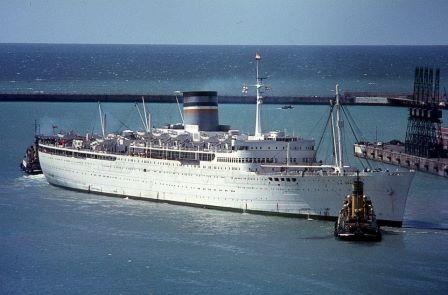 So there I was enjoying a lay up in Durban over Xmas 1966 awaiting the 1967 fruit season on the Clan Ramsay, when suddenly I was transferred to the SA Oranje (ex Pretoria Castle).

She was still registered in London and was still fully manned & operated by B & C. Her chief officer had been transferred to command a cargo vessel, all the deck officers were moved up a rank & I slotted in at the bottom as Snr Cadet.

This was an ambition achieved as I had last been on the bridge of a mailship as a deck boy on the Stirling Castle & had vowed to return as an officer. 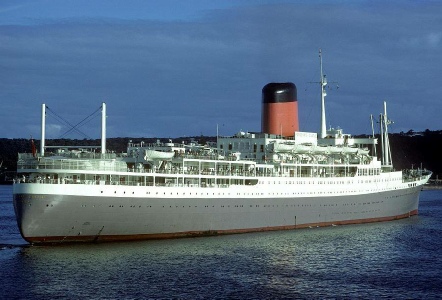 After Clan Macinnes I had 2 weeks leave & was then posted to my all time favourite ship, Pendennis Castle.

She always had a good reputation as a fun ship & in my opinion was the most beautiful ship in the fleet. 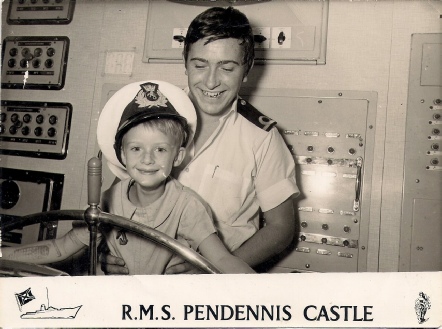 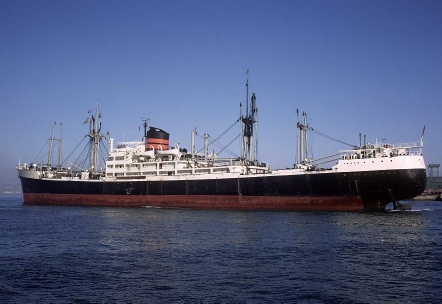 As much as I was loving my time on the Pendennis in 1969, I was only getting two thirds sea time towards my next qualification as I was the junior of two watchkeeping officers. So I asked for a transfer.

I then was posted to our companies last 12 passenger vessel, in which we did a beautiful run from Liverpool to Australia & back to London via the Med. That was 6 months of pure bliss! 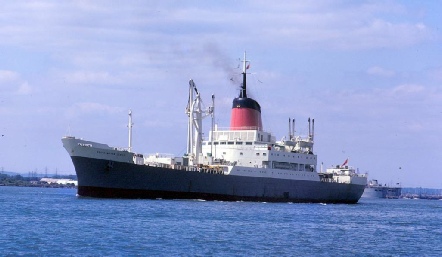 My next ship after the Argyllshire was the cargo mailship Southampton Castle.

She was very fast & was able to fit in Ascension Island & St. Helena extra in the normal mailship schedule. She carried 12 cabin passengers. 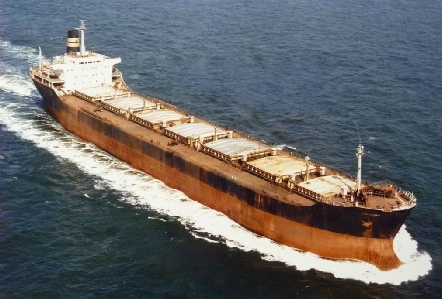 1971 brought me promotion to 2nd mate & a posting to the bulk carrier King James.

She took me to all the continents except North America in nearly 7 months and provided the deposit on my first house. 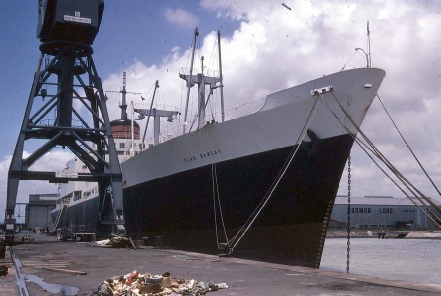 After King James, it is back to an old pal the Clan Ramsay for 7 months of bliss, steaming between S.Africa & Europe, finishing off with a trip to Argentina for potatoes to keep the European fish & chip shops stocked. 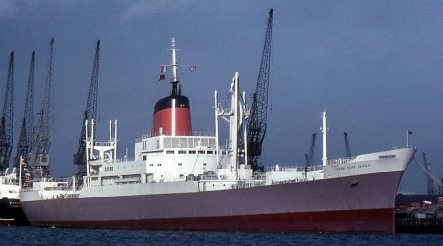 After the Clan Ramsay it's back to the Cape Mail via Ascension & St Helena on the Good Hope Castle, sister of Southampton Castle. Lovely run, but never had enough time to go ashore in those islands.

During my 4th voyage the pasengers & senior officers were enjoying dinner in the evening of our departure from Ascension island. I was on watch on the bridge. The engine room rang to inform me that there was a fire in the engine room. I pressed the alarm bell button and the game was on!

We fought the engine room fire & then the accommodation fire that ensued from that.

The passengers & my wife who was with us that trip were put into one of the lifeboats to await developments. We fought the fire all night in relays. By daylight it was apparent that we had lost the war as the boat deck we were standing on was getting hot. So we abandoned ship in 3 of the 4 lifeboats. I had my first command!

Awnings were rigged and the boats were kept together.

The next morning we sighted a Getty tanker & gave them an impressive firework display. We had not managed to contact anyone with our lifeboat radio.

They rescued us & dropped us at Ascension Island.

There were no serious injuries. just a bit of sun burn here & there. 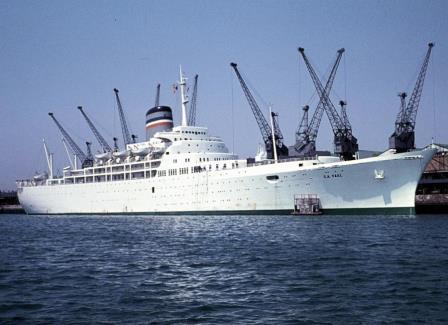 After about a months leave from the Good Hope I found myself as 2/0 on the SA Vaal all kitted out in my brand new uniforms.

She was the old Transvaal Castle that had been sold to Safmarine. She was still manned mostly by B & C staff.

On my 4th voyage I managed to persuade my wife to come with me. She had had quite a rough time of it in the GHC's lifeboat.

Happily she reajusted to sea life again in the comfort of the "Vaal". 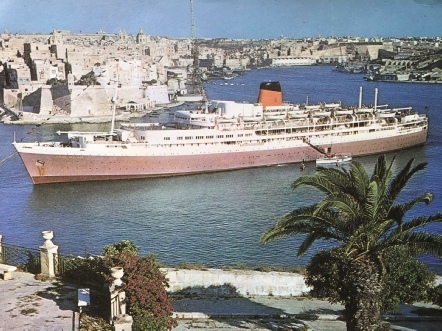 And so I say goodbye to B&C or Cayzer Irvine as it was called then in August 74.

I did 2 relieving voyages on Reina del Mar.

Most enjoyable excursions to the med.

With the price of fuel oil going up, container ships coming on stream,more passengers taking to the air, no new building exept tankers - I could see no future for me in Cayzer Irvine. So I started looking for a new adventure.

More of Tony’s career is told on his Facebook Page