Left in 1982 when third officer of Stirling Universal

Completed cadetship and sailed as a junior officer, but left when the company was selling the last of its ships.

Had a career in maritime education subsequently, including ten years as the Director of Warsash where I did my cadetship.

Recently retired, but still involved with the maritime industry as an Emeritus Professor.

John Millican's association with the Warsash campus began in 1975 when he was an officer-cadet sponsored by the British and Commonwealth Shipping Company. His academic career also started at Warsash, when he became a lecturer at what was then the College of Maritime Studies in 1987. After a period as Manager of the Institute of Maritime Law at the University of Southampton, he returned to Warsash once more to take up the post of Head of the Golf House Management Centre. After some years as Deputy Director, he became Director in March 2001.

As well as being professionally qualified as a mariner, John holds a first class honours in law from Newcastle Polytechnic and a MSc in Education and Training Management from Portsmouth University. He was made Associate Professor of Maritime Management in 1992 in recognition of his work for Mobil Shipping. He is a Fellow of the Nautical Institute and a Chartered Marine Technologist and Fellow of the Institute of Marine Engineering, Science and Technology. He sits on a number of shipping industry and professional body committees, including the Merchant Navy Training Board.

John admits that he chose to go to sea in pursuit of an adventurous life rather than as part of a carefully considered career plan, and his CV also includes two round-the-world voyages and, as officer of the watch, helping to rescue the crew of a bulk carrier which sank in the South China seas during a typhoon.

John is happily married with a teenage son and twin daughters. 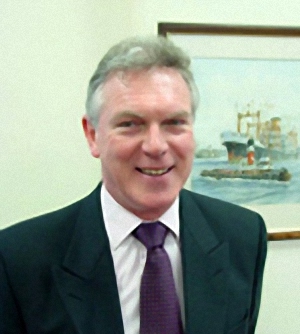 Director of Faculty of Maritime & Technology