One trip on the “ Balmoral Castle “

Joined the “ Table Bay “, Owned by O.C.L. but crewed and managed by Cayzer Irvine & Co. Ltd. By that time I had got in enough sea time to get my A.Bs Certificate.

Went to Hamburg for modifications and a change of name to “ Zim Barcelona “ , Promoted to Bosuns Mate.

Joined the “ King William “ sister ship to the George

Joined the “ King Alfred “ a smaller bulk carrier than the George & William, 7 hatches instead of 9.

Joined the “ Balmoral Universal “ for one trip.

Back to the “ King Alfred “

Joined the “ Scottish Eagle “  tanker, in the Falkland Islands, we were anchored off San Carlos Water, Basically used as a fuelling station, R.N. Ships of all Types, Frigates, Destroyers, R.F.As & Subs would refuel from us, we once had 4 R.N. ships alongside us, two from the Old Patrol that was going home and two from the New Patrol that had just come down, the R.N. Crew were transferring ordinance across our deck from the Old Patrol to the New One. To join the “ Scottish Eagle “ we flew to Ascension Island then a 10 day ferry trip to the ship.

Joined the “ Scottish Lion “ , circumnavigated the world on this trip.

Joined my first ferry , Thoresen Car Ferries “ Dragon “ After that various ferries, F E 5, Viking Valiant, Viking Trader, Viking Viscount, on the Viscount we did a MOD charter if memory serves it was code named “ Purple Warrior “ ,Pride of Hampshire, Pride of Cherbourg,

Promoted to Bosun, Joined European Trader, then on to the new “ Pride of Cherbourg “, ex Isle of Innisfree, Pride of Le Havre, Pride of Bilbao and finally the Pride of York.

And I have enjoyed it all. 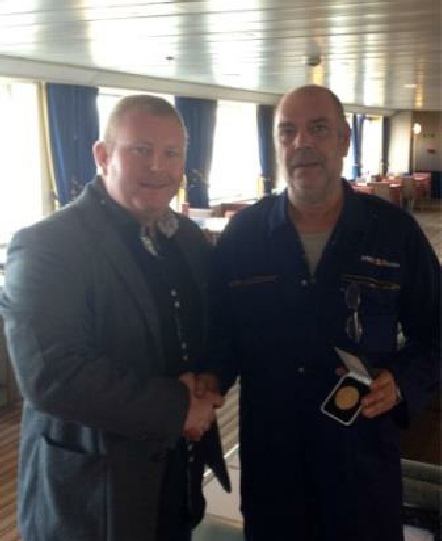