He was Chairman of the OP Society 1984-86 and a Trustee of the Society for 12 years. David joined the NCP in 1965 and, after the Port Jackson stint, settled in to Macquarie. At the College he rowed with the 1st V111 and played rugby for the 1st XV.

“On leaving Pangbourne David briefly served in the Royal Marines before moving to the Merchant Navy. He learnt his trade with various companies before joining The Clan Line, travelling to and from South Africa.

On leaving the sea, he began his ship broking career with Vogt and Maguire, becoming a member of the Baltic Exchange in 1977. He became an employee of the Baltic in 1998 where he oversaw the implementation of a wide range of developments to the freight market indices and assessments which today underpin the international freight derivatives markets.

Within 48 hours of his death the Baltic released an obituary which concluded with a quote by the Baltic’s Chief Executive Jeremy Penn: “He was the perfect work companion – funny, engaged, part of the team and completely serious about what we do. We have lost a great friend.” 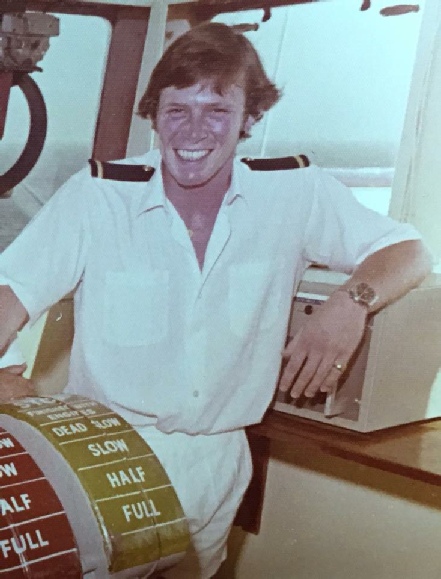 We have just attended Union-Castle Reunion @ Southampton; where very sadly we learned of David Bradley’s death some 8 or 9 years ago, but no other details. He was a deck officer 3rd mate on the Pendennis Castle in 1974-5. When I was the nursing sister there.

David was a good friend & I’d like to know any details etc. I would like to send his family our sincere condolences.

On the bridge of Pendennis Castle