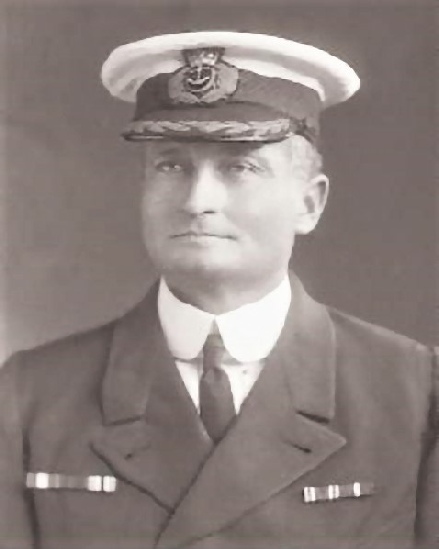 He trained as Cadet aged 14 in Conway, before serving in his first ship, the Liverpool barque Red Gauntlet; whilst serving as Chief Officer in the Union-Castle Line Steamer Crawford Castle, Harvey played a leading role in a daring rescue of S.S. Willy

At 8.15am, Sunday 1.10.1911, the steamship Willy (862 tons), of the Coaling Agency of W.H. Berghuys of Amsterdam, was observed flying signals of distress in the North Sea. The ship bound from Newcastle to Amsterdam had sprung a leak due to the horrendous conditions, apparent for the last 24 hours.

The Cawdor Castle (Captain E.W. Day), which had set sail that morning, came upon the Willy in her state of distress, and despite the hurricane like conditions that were raging, determined to send a lifeboat out to her. At 10.50am the lifeboat was launched, under the command of Harvey, crewed by six Able Seamen (E. Jones (Quartermaster); J. Avis; W. Yapp; C. Anderson; M. McDonald and E. Franklin), 'With characteristic British courage.....they stuck manfully to their oars, and gradually lessened the distance between them and the disabled steamer'.

The perilous seas continued to play havoc with the rescue attempt. Firstly a Dutch crewman, aware of how grim the situation was, dived overboard, only to be swept further away, causing immense difficulties for the lifeboat to rescue him; and shortly following his pick up, two men attempting to get a ladder to the lifeboat fell overboard. Captain Day brought the Cawdor Castle to windward of the lifeboat, and sheltered it from the wind, thus finally enabling the craft to reach the stricken Dutchmen.

Harvey loaded ten of the crew, and made with his load back to the Cawdor Castle. However having struggled to make a length away from the Willy, shouts came across to him that she was sinking fast and that unless he came back for the rest of the crew, then they would surely go down with her. Thus loaded with the last six Dutch crew members the lifeboat finally started to return to its mother ship. Given the conditions and the fact that she was so heavily laden it was deemed too dangerous to attempt to turn the craft round, thus the oarsmen had the particularly arduous task of having to back water.

Within 15 minutes of rescuing the crew, at 12.50pm, the Willy heeled over and sank head first into the North Sea, 'At 1.15pm the lifeboat reached the ship, badly damaged and half full of water, with crew and survivors completely exhausted.....I cannot speak too highly of the conduct of the Chief Officer and the lifeboat's crew, who showed great gallantry." (Newspaper Cutting, Interview with Captain E.W. Day refers). The battle against the waves had lasted two and a half hours, and the badly damaged lifeboat had to be abandoned. On arrival in Cape Town, the Mayor of the City (Sir F. Smith), presented the crew with their Lloyd's medals and certificates; Day and Harvey subsequently recieved the Dutch gold medals upon their return to England. Harvey recieved Lloyd's Silver medal for Saving Life at Sea, 36mm. (H.B. Harvey, Chief Officer, S.S."Cawdor Castle" 1st October 1911.), the Netherlands, Gold Medal for Saving Life, 60mm. x 32mm., reverse impressed 'H.B. Harvey', in J.M.J. Van Wielik, Haag, case of issue, with bestowal document dated 24.12.1912 and the Netherlands, South Holland Lifeboat Institution of Rotterdam's Gold medal, 44mm., reverse engraved 'H.B. Harvey 1911'

Early in the Great War, Harvey was appointed to his first command, the S.S. Hova (afterwards re-named the Crawford Castle), 'When the Hova was off Cape Sidero, Crete, on one voyage, carrying 1,000 tons of coal for the British Fleet in the Persian Gulf, she was attacked by a German submarine. Fortunately, the torpedo was seen in time, and, thanks to smart handling by Captain Harvey, the ship was so manoeuvred that the torpedo missed the stern by six feet. Captain Harvey's next encounter with a U-boat had more serious results, for his ship, the Leasowe Castle, was struck by a torpedo which carried away the rudder. Fortunately, however, the propellers were not harmed, and the vessel eventually reached Gibraltar.' (The Journal of Commerce & Shipping Telegraph, 28.7.1934, refers).

Captain H.B. Harvey served in 39 vessels during his 36 years service with the Union-Castle Line, and retired in 1934 after 50 eventful years at sea.

Medals awarded by the Dutch after the rescue of  SS Willy