This entry is an attempt to find out some facts about my father.

The only documentary proof I have of any connection between my father and Union-Castle is his CR10 Identity Certificate No.383619. Discharge No. 61123.

I believe he was still with Union-Castle in the late 1920s/early 1930s as he met my mother on the Winchester Castle when she was a coastal passenger between East London and Cape Town. They married in February 1936 in East London.

My oldest brother was named Chester in memory of that ship.

Other records I have are his RN boys service papers showing he enrolled in may 1910 aged 17.

He was discharged in November 1910. The papers record his discharge, the reason recorded as “desertion”.

However there seems to be a mystery about that as almost immediately he was with the Foreign Service Diplomatic Corps serving in Russia. This was because he was fluent in Russian having been educated there from 5 to 16. It seems odd that a deserter would immediately resurface serving his country in Russia ferrying diplomatic pouches etc.

It seems more likely that the authorities realised that a boy of 17 that could pass as a Russian was a lot more valuable than being in the RN boys service. From the point of discharge in November 1910 he completely disappeared until his Seaman’s ID was issued at the end of 1918.

He served in Russia from before WW1 and right through the Russian Revolution. During that period he was involved in all sorts of operations. He was torpedoed twice and spent days adrift in lifeboats. One of these incidents injured an eye and the sight in that eye was permanently damaged.

I am the youngest of his 5 sons....and have the least memory of him.

* That period on the China Navigation vessel chimes with a memory of Dad talking about sailing in tramp steamers on the Yangtze River....and being shot at by Chinese nationalist on the river banks.

* Another brother recalls mention of South America and being on a ship that called at Montevideo.

* Another recalls Dad talking about carrying diplomatic pouches on the Trans-Siberian Express.

* Another that he talked about a ship called the Susquehanna.

(My research shows that this was formerly a Bremen Line vessel , The Rhine, captured by the US in WW1 and renamed Susquehanna and used as a troop ship to take US soldiers back to the States after WW1.)

(I believe that this is an error and may refer to the U-C ship Susquehanna..not the same as the american ex Bremen Line, CNI)

* Another recalls that Dad talked of  a vessel called Rin-Tin-Tin. (My research shows that she was the RN collier Renfrew, sold to the US navy to use as a troop ferry between French ports and US transport vessels at the end of WW1, and re-named  Rin-Tin-Tin.)

While researching Susquehanna in US Navy archives I came across a photograph of her anchored off the French port of Brest in 1919, loading US troops from a smaller vessel.....the name of the smaller vessel is clearly seen on her bridge.....Rin-Tin-Tin.

That photograph really sealed as factually accurate the recollections of two brothers who had not discussed either vessel with each other prior to telling me of their separate recollections.

A brother recalls tales of Dad being in a joint UK / US mission sent by sea from San Francisco to Vladivostok in about 1917 to rescue diplomats and others  that were trapped thereby advancing Bolshevik forces. They found the people but evacuation by sea became impossible due to naval activity off the port, so they escorted the party across Russia and Siberia, finally reaching Bergen in Norway from where a RN destroyer transported them to Aberdeen, Scotland. My research of American archives shows that such a mission was mounted and that the UK and US governments each put up $75,000 to mount it.

The UK government refuse to confirm or deny any of this and tell me the files are sealed under a 100 year rule, and will possibly be available in 2017, or sealed yet again.

All very intriguing and tantalising!

The ID document is 100% accurate with everything except the additional names.

His photograph and next of kin are 100% accurate.

He was born Clement Leslie Chandler but why his ID shows his to be Basil Clement Leeke Leary-Chandler is a complete puzzle. None of the ‘added’ names are connected to his family. 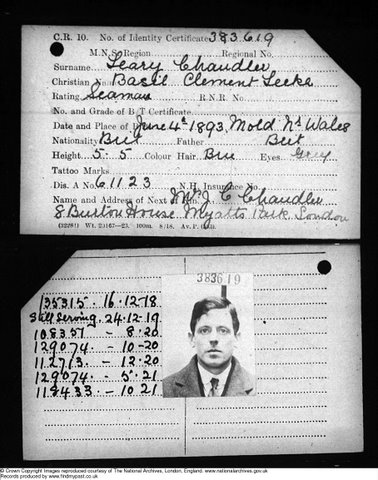 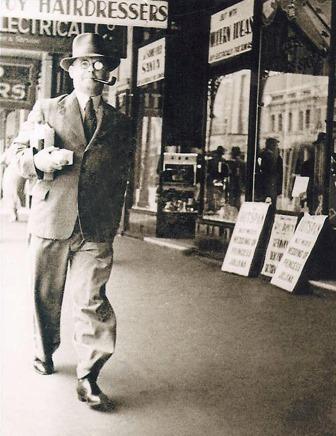