From Brixham At War

Because of its importance as a maritime centre, Brixham was the subject of a number of air attacks, the first raid taking place at Galmpton on 6th July 1940 when only minor damage was done.

Four days later, nine small bombs were dropped at Marldon and, only a few hours after, ten at Churston.

On 14 July a daylight raider dropped four bombs at Brixham and "sank a liner", according to the German News Agency. This was, in reality, the coal hulk London City, which sank at her moorings.

She was later refloated, only to be sunk a second time later on. It had been assumed by the Authorities that there would be some warning of enemy aircraft; the first five air-raids showed that this was not likely to be the case - most of Torbay's were the so-called "tip-and-run" raids which were over before the sirens had time to sound.

Brixham was attacked again on 17th January 1941 with little damage sustained and also on 27th February when London City was sunk again. On this occasion too, the German High Command reported a major success.

A high-explosive bomb dropped at Broadsands causing slight damage and, at the same time, two trawlers were hit in Brixham harbour. Not long afterwards, time-bombs landed in Fore Street and Middle Street which caused five deaths; gas mains and the gasometer were also hit.

During a raid in 1942 the London City was "sunk" for the third time.

SUSQUEHANNA was built in 1896 by Barclay, Curle & Co. at Glasgow with a tonnage of 3711grt, a length of 350ft, a beam of 45ft 4in and a service speed of 10 knots. With a profile similar to that of the Sabine she was completed for as the Mount Sephar for Smith & Service of Glasgow.

She was acquired by the Union Steam Ship Co. in 1898 and renamed Susquehanna for their South Africa to USA service.

As part of the Union-Castle line she was sold to Denaby Shipping & Commercial Co. of Southampton in 1921 and renamed London City.

In 1922 her owners changed their name to Denaby & Cadeby Main Collieries Ltd and the London City was relegated to a coal depot ship at Brixham in Devon. 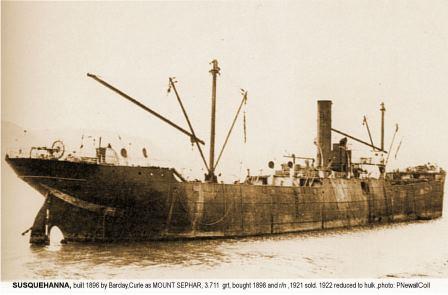 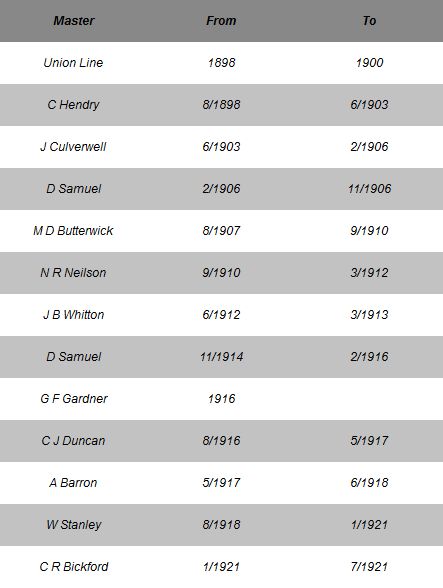