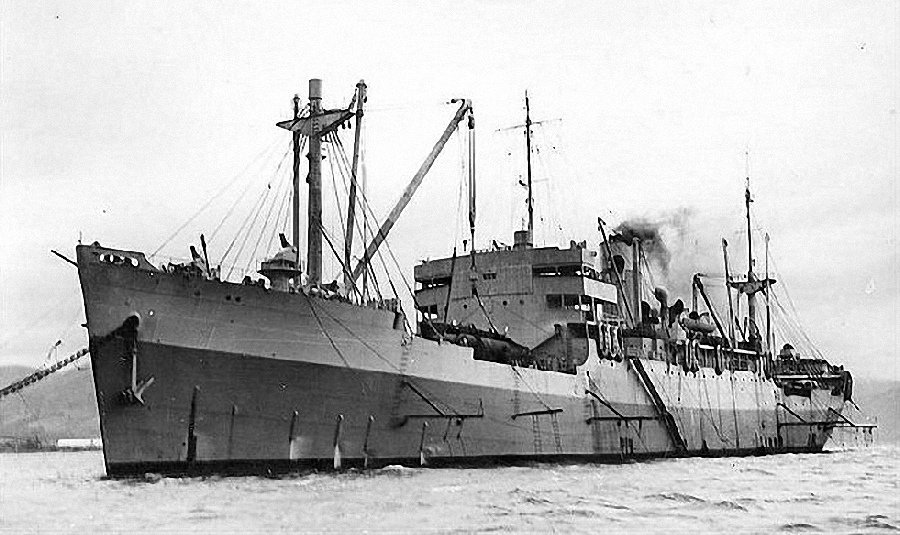 She was laid down at the yards of the Greenock & Grangemouth Dockyard Company, of Greenock, Scotland as one of the Cameron class ships of the Clan Line. She was provisionally allocated the name Clan Campbell. With the outbreak of war, the Royal Navy decided to requisition her, and after her launch on 27 October 1942, she was converted at the yards of Scotts Shipbuilding and Engineering Company to become a submarine depot ship for the X class midget submarines. After the conversion was completed she was commissioned into the Navy on 26 January 1943.

After completing work-up trials, Bonaventure sailed to Loch Striven on the west bank of the Clyde to become the main training base and depot ship for the X craft midget submarines. During August and September 1943, training and trials were carried out for the midget submarines X5, X6, X7, X8, X9 and X10. They were to be used to carry out the attack on the German battleship Tirpitz in Altenfjord, Norway, codenamed Operation Source.

During the operation, the submarines HMS Thrasher, Truculent, Stubborn, Syrtis, Sceptre and Sea Nymph each towed a midget submarine to Norwegian waters. Despite a number of the X craft being lost, the operation was a success and the Tirpitz was put out of action for the next six months. In October, Bonaventure sailed to Govan to be refitted at the yards of Alexander Stephen and Sons. The refit lasted until 2 January 1944 and involved the fitting of new radar equipment. Some work was not completed before the Bonaventure was recommissioned on 22 January to serve with the British Pacific Fleet. She again deployed at Loch Striven in preparation. She remained deployed there until March, when she returned to Govan to complete the outstanding dockyard work. These refits lasted until August, when after post-refit trials, she returned to Loch Striven in September. October to November was spent training on the loch. During this period, the modified XE class submarines, which had been under construction since January 1944, became available. Several were embarked aboard Bonaventure for use against targets in the Far East. In December she was nominated for deployment as the depot ship for the 14th Submarine Flotilla in the south west Pacific.

Bonaventure’s departure was initially delayed, and in January she embarked six XE type submarines. She left the United Kingdom on 21 February, sailing for Australia via the Panama Canal. After going through the canal, she crossed the Pacific, arriving at Pearl Harbor on 7 March. The attitude of the US Navy was discouraging, and the use of midget submarines was not looked on with much enthusiasm.[1] Bonaventure arrived at Brisbane on 27 April and received approval to move nearer to the operational area and to approach the local US Navy authorities. She subsequently sailed to Townsville, Queensland in May, where a visit was made by a senior officer of the 14th Flotilla to the US Navy Base at Subic Bay. The Americans remained sceptical and suggested that the Bonaventure be converted to perform a wider support role. On 31 May the proposal was made to use midget submarines to cut Japanese underwater telegraph cables.

Bonaventure was transferred to Hervey Bay, Queensland in June, and then to an area south of Townsville, to prepare for the cable cutting operations. She carried out extensive training and experiments using a disused telegraph cable between Australia and New Guinea. During these exercises, two divers died after suffering oxygen poisoning. After the operational targets had been selected, Bonaventure sailed to Labuan, Borneo. Throughout July she prepared for three operations. Operation Struggle aimed to place limpet mines on the Japanese cruisers Myōkō and Takao, based at Singapore with the 10th Fleet. Operation Foil aimed to cut telegraph cables in the Lamma Channel[disambiguation needed], off Hong Kong, and Operation Sabre was intended to cut telegraph cables at Cap St Jacques, off Saigon. These cables were vital to Japanese signal security as radio signals could be deciphered by US code breakers.

The operations began on 26 July. HMS Stygian towed XE3 and HMS Spark towed HMS XE1 for Operation Struggle. The Takao was badly damaged, sinking to the seabed, but the attack on the Myōkō failed. For Operation Sabre, HMS Spearhead towed the XE4, which succeeded in cutting two cables and bringing sections back to the Bonaventure. Operation Foil was carried out using HMS Maidstone, based at Subic Bay, as the depot ship. HMS Selene towed the XE5, but the tow failed part way through the voyage. XE5 was able to reach the target under her own power and succeeded in severing the cable. The submarines returned in tow to Bonaventure on the 3rd, 4th and 5th. Bonaventure’s last activity before the end of the war was to sail to Sydney from Labuan on 20 August.

HMS Bonaventure, command ship for the newly formed 14th Submarine Flotilla, sailed for the Far East on 21st February 1945 with XE1 to XE6 onboard. Although the American Navy was most reluctant to welcome the midget submarine flotilla they agreed to Capt Fell carrying out the cutting of telephone cables at two points in South East Asia. The idea was to isolate Singapore from Japan by direct telephone cable traversing Indo China and Hong Kong just before an invasion by a joint force. Four XE Craft were designated for operations. XE1 & XE3 were to attack two Japanese cruisers in the Singapore Strait where they were acting as guard ships to that most important anchorage. XE4 concerned itself with the cutting of the cable - in two places - outside Saigon. XE5 tackled the cable, also in two places, outside Hong Kong. All operations were successful with XE1 and XE3 just attacking one cruiser. These successes were not clear at the time but, at the ending of the war in the Far East in August, they were confirmed. Hush Hush till the very end. 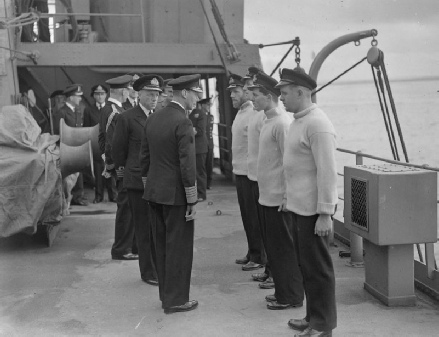 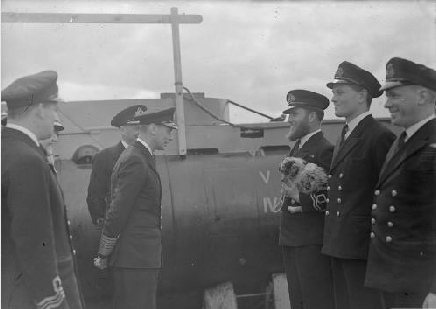 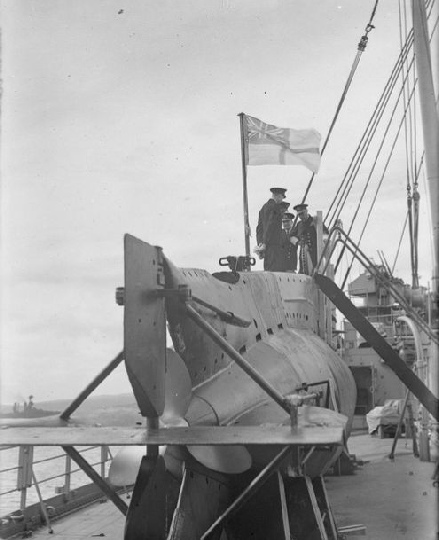 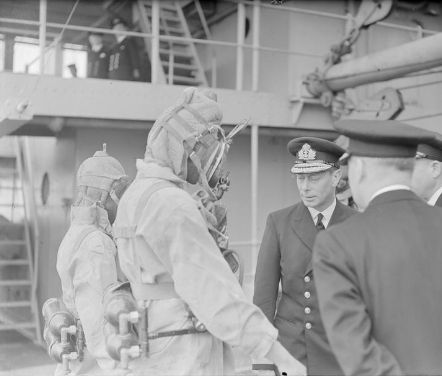 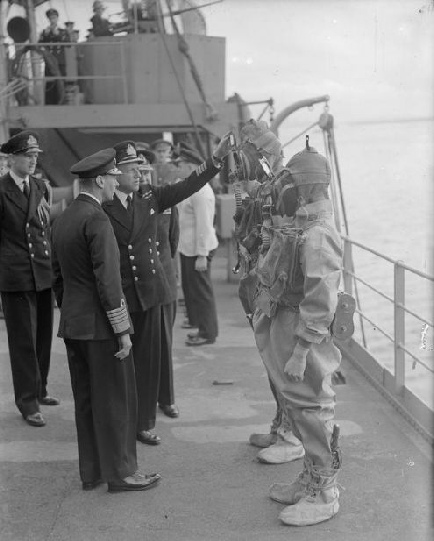 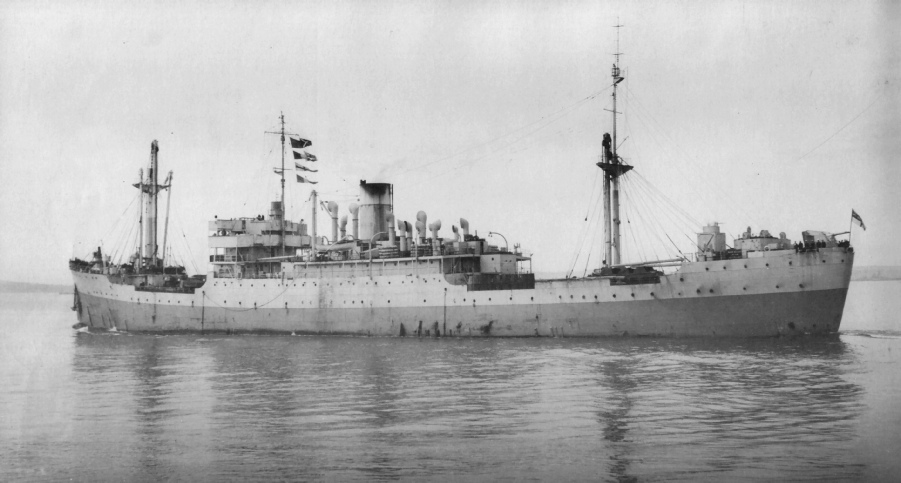 Commander of The British Empire

Member of The British Empire

The Most Decorated Ship in the Royal Navy 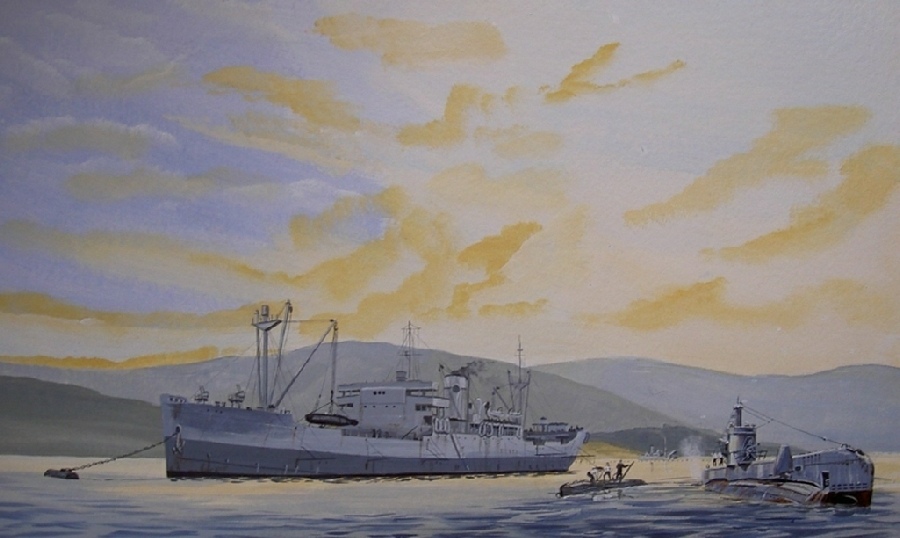 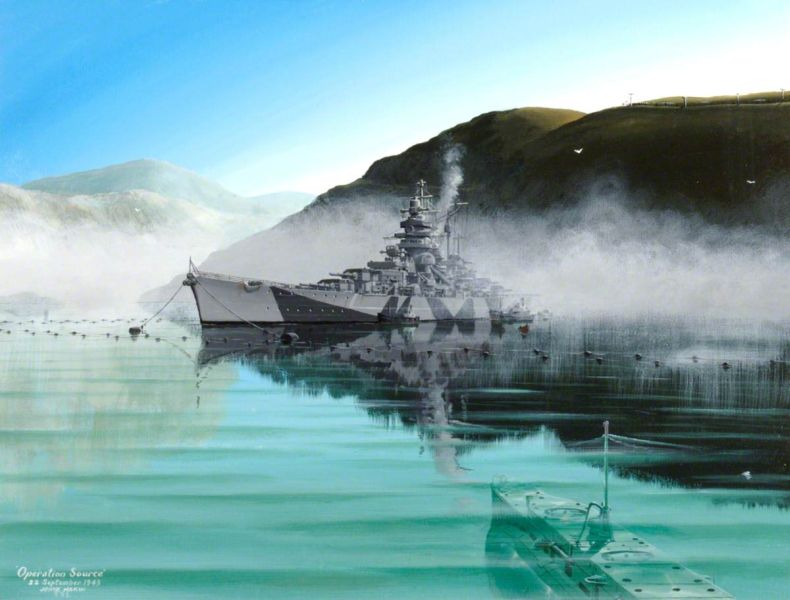 A painting produced to commemorate the success of Operation Source