Braemar Castle was built in 1898 as one of the last ships for the Castle Line before its merger with the Union Line. She was built by Barclay, Curle & Co., of Glasgow.

A handsome four-master, Braemar Castle was the first Castle intermediate steamer built without yards on her foremast.

During the Boer War she carried her quota of troops and in 1902 very nearly came to grief on the Isle of Wight where she lay stranded for two day in January 1902.

In 1909 she was taken over by the British Government as a hired transport and as such she removed her Union-Castle colours for those of a peace-time trooper, Yellow funnel and a white hull with blue ribbon. In this unfamiliar livery she paid occasional visits to the Cape on her way to or from the East.

She had been running again on the intermediate service for a year or two when on 6 August 1914 she was hurriedly pressed into service as a transport and rushed a portion of the first British contingent over to France. For over a year she served as a troopship until in October 1915 she was converted into a hospital ship.

On 23 November 1916 while in the eastern Mediterranean she struck a mine in the Mykoni Channel. Four lives were lost but the Braemar Castle, fortunately, was beached and temporary repairs patched up. For three months she lay in Malta awaiting repairs but the dockyard was too busy with naval work to take her on and so she was taken across to Spezzia where the Italians made her seaworthy once more. Resuming her duties as hospital ship and ambulance transport she then made a trip to Canada in December 1917 and some months afterwards it was decided to use her in connection with the North Russian Campaign - the Murmansk Venture - which was underatken in 1918.

Intervention in North Russia had become necessary in order to craete a diversion, for since the collapse of the Russian Army, the Germans had been transferring their men in thousands to the Western Front. It was the German aim to establish a submarine base at Murmansk, while at Archangel there lay vast quantities of stores which had been sent to Russia when that country was still a member of the Alliance. 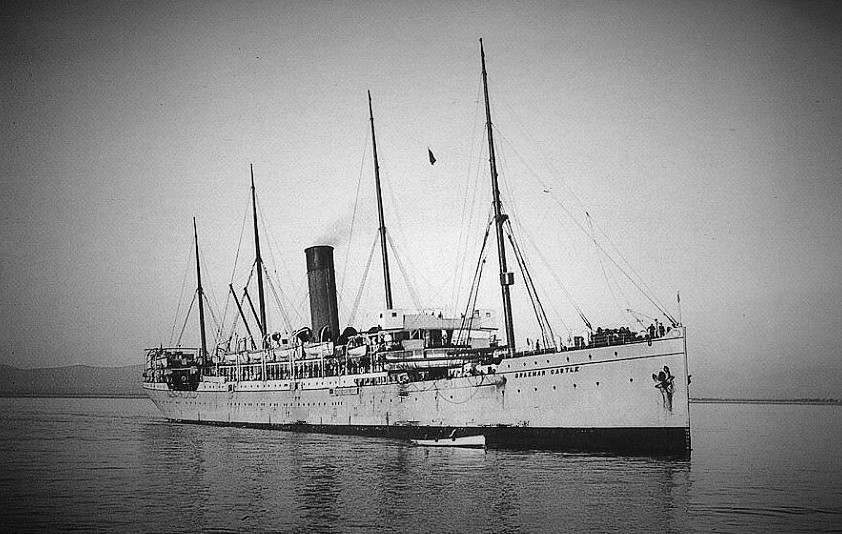 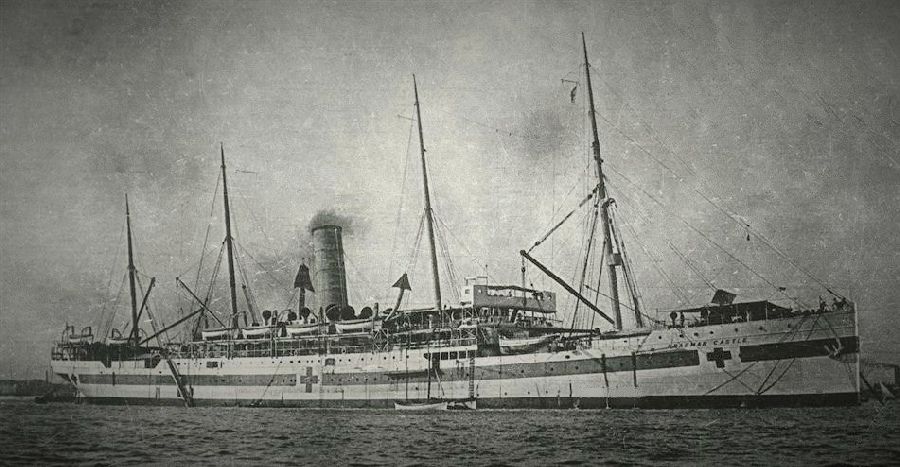 As a hospital ship

H.M.H.S. Braemar Castle struck a mine in the Mykoni Channel on 23rd November 1916.

An anonymous nurse described what happened.

An English nurse who was on board the Braemar Castle, the British hospital ship that was torpedoed in the Mediterranean, has sent to the London Daily Express the following graphic account of the scenes that followed explosion:

The major and his staff were just going [on] the official inspection round when an awful explosion occurred. We were in B Ward, just above C, which had very worst of it. The stairways were blown away, and several men killed instantly. A minute later we should have been in C Ward or on the stairs.

There was a crash and a thud and a feeling of an earthquake; windows blown in; beds reeling over; splinters flying; dust and gunpowder. I heard a patient scream (probably a poor neurotic amputation case), but every one else was absolutely quick and quiet. There was no panic. 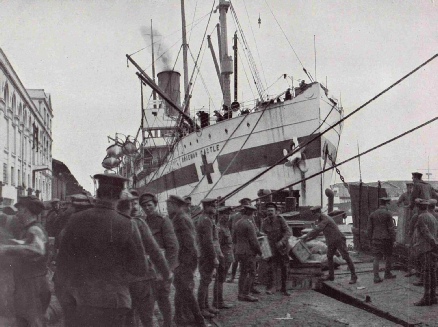 It was marvellous how quickly and quietly the doctors and orderlies carried the cot cases, mostly on their backs. “Hold tight. Don’t mind a damn how much I hurt you!” was what they said. Even when the cranes and hatchways are all working well it is a matter of hours getting patients on or off a ship, yet within a quarter of on hour of being struck the ship was clear — 500 odd souls in the lifeboats, and only the captain, engineers, and stokers (brave men) left in the ship. I got into the last boat. A man got hold of me and put me over the side on the rope ladder. That ladder was almost the worst experience of all.”

A sergeant-major was sitting up in the boat with one of the oars. I was surprised to see him, as he had a very bad fractured pelvis. He told me he sat up in bed, ripped off his splints with his jack-knife, and climbed to the stairs somehow. I lifted him back on the seat like a baby and took the oar. After I had been rowing some time a “mental case" relieved me. I had been visiting him in the padded cell not long before. “I am stronger than you,” he said as he took the oar, and rowed as well as a sane man the rest of the way.

We drifted about in the lifeboats watching our dear old Braemar home slowly sinking, sinking, the water-line disappearing at the head. Then the most wonderful thing happened. The propellers of the Braemar began to work, and the proud old wreck was game to the last, though with a yawning hole in her side. We knew the brave captain was at his post on the bridge, and that the engineers and stokers were working below, and watched breathlessly to see if the water or the engines would gain the day.

The captain even flag-wagged to the steward to come and fetch some food — cool-headed Englishman! Yet we heard after that the captain had been badly hurt — blown right up on the bridge and came down on the compass.

A French gunboat picked up some of us, and a black sloop took on another 200. With only two stretchers on board it took a long time lifting the helpless cases to the sloop. One man — plucky is not the word for him — had sustained a bad compound fracture from the explosion, yet he crawled up. We could only secure the fracture with a hatchet tied on with a sister’s cap. 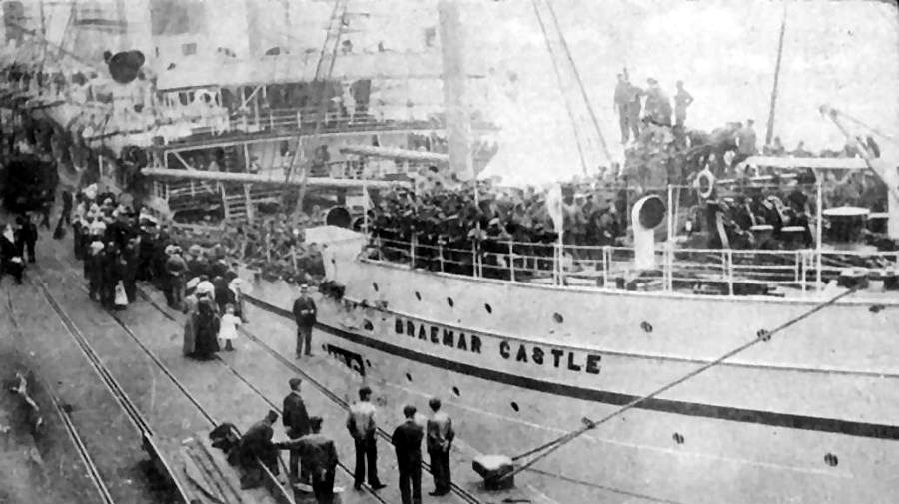 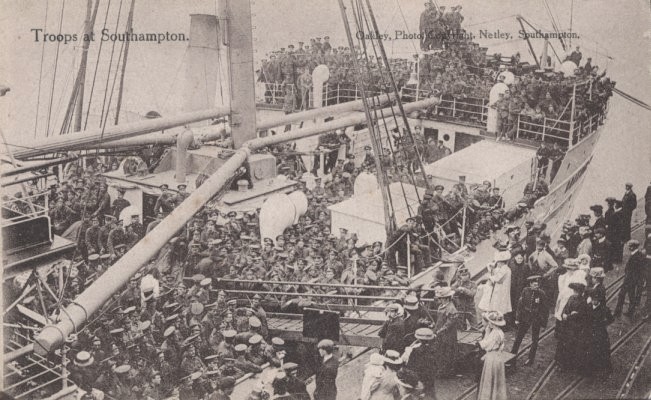 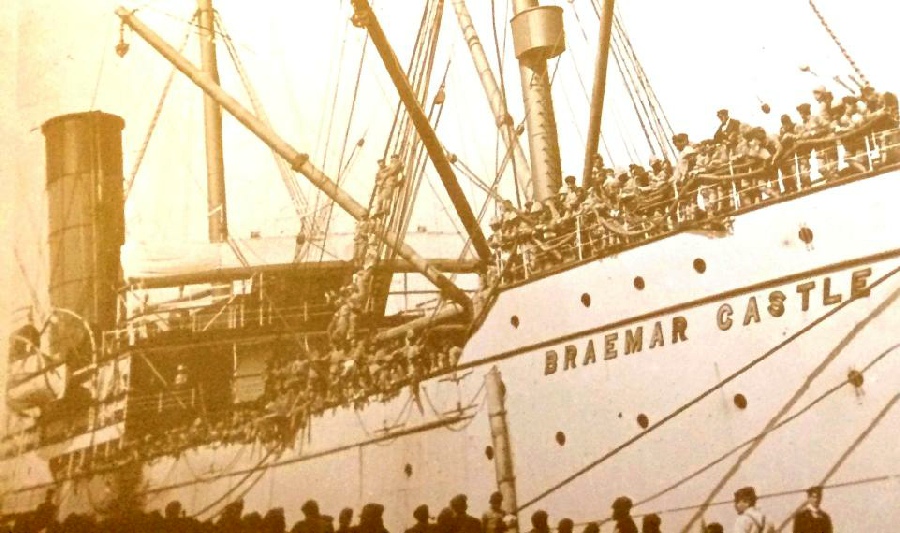 The expedition duly set out and Braemar Castle was designated as the base hospital at Murmansk. Her decks were boarded in so as to provide increased accommodation and also to keep out the cold. Her curious appearance won her the name of “Noah’s Ark” by which she was known during her stay in the Far North. Surrounded by ice Braemar Castle lay at Murmansk for nearly a year. Every day parties of Russian refugees were set to work to break the ice which so often threatened to pinch the vessel.

Most of the distinguished men engaged in the campaign visited her, including Sir Ernest Shackleton, himself a former Union-Castle officer, who was in charge of Arctic equipment.

When the campaign drew to its close Braemar Castle was sent back to Leith with invalids and then went across to Archangel, being the last veseel to leave the port before the evacuation.

The European War had now been over for some months but Braemar Castle was used as a transport until June 1920 when she once again took an intermediate sailing to the Cape. This proved to be her last visit to South Africa, for on her return home she was again requisitioned as a trooper wnd was sent to India and China. She was also used in connection with the post-War trouble in Turkey in 1922.