Alnwick Castle was the first of four cargo-passenger vessels ordered by Sir Donald Currie soon after the Castle-Union amalgamation.

The conclusion of the Boer War had encouraged the belief that emigration on a large scale to South Africa would follow and, accordingly, the Alnwick Castle and her sisters Berwick, Cawdor and Newark Castles were fitted with ample third-class accomodation but carried only a few first and second-class passengers.

Two more “extra” steamers, as they were called, were added shortly afterwards, Cluny and Comrie Castles, and, until the outbreak of the Great War in 1914 these six vessels were employed on the West Coast run, calling generally at Lobito Bay - then hardly developed- and occasionally at Mossamedes; they were also employed on a regular Mauritius service.

Shortly after the commencement of hostilities in 1914 the Alnwick Castle was requisitioned as a troopship and in 1915 was at the Dardanelles, where she had brought  a detachment of the Royal Navy Division.

She resumed her place in the Company’s fleet in 1916, but early in 1917 she was torpedoes when outward bound to Cape Town. 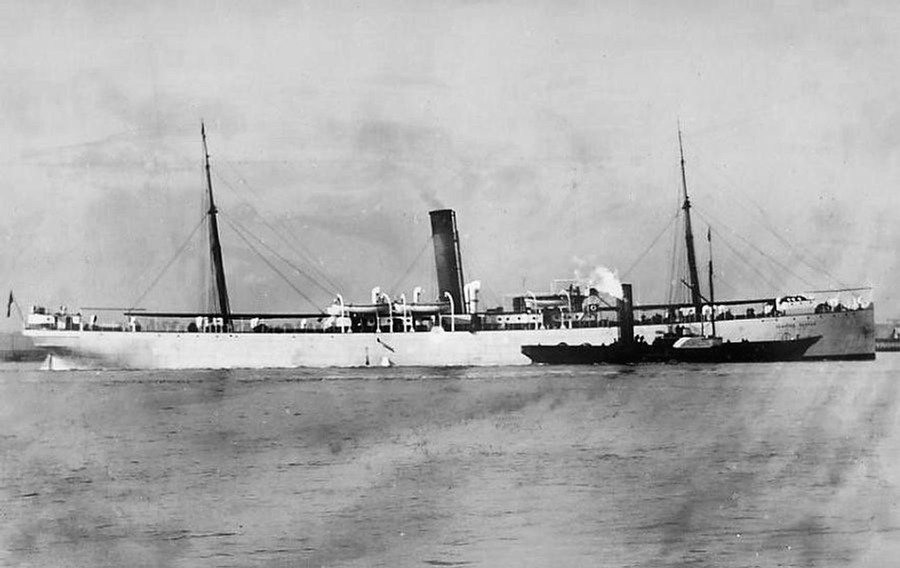 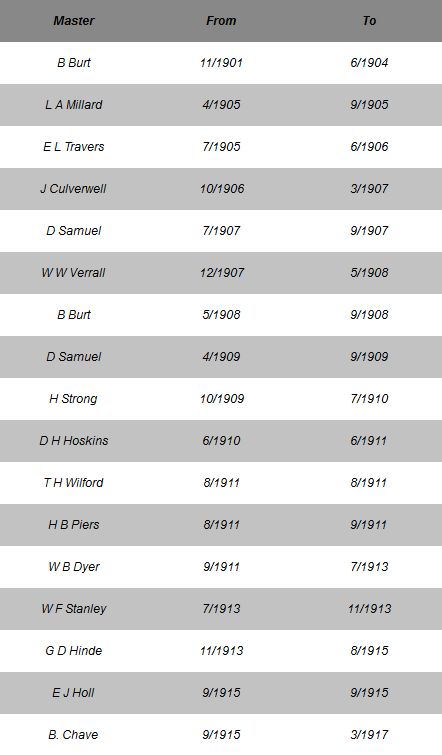 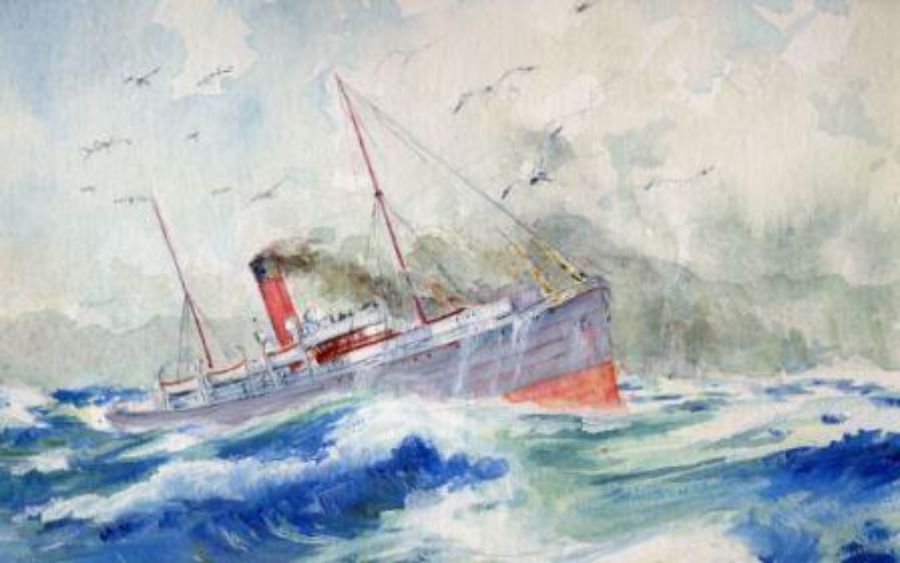 “THE LOSS OF THE "ALNWICK CASTLE"

From Ships of South Africa by Marischall Murray.

A day out from England (she had sailed from Plymouth on March 17th 1917 Captain Benjamin Chave in command) the Alnwick Castle picked up 25 survivors from the Trevose, which had just been sunk by a submarine.   Before daylight next morning, at 6.10 a.m., the Alnwick Castle herself was torpedoed without warning and within half an hour she had gone to the bottom of the sea.

Everyone on board was safely got off in the lifeboats, six in number, which were now cast adrift more than 300 miles from the nearest land. Within a short time the boats were separated, and were lost to sight one from another.

In the Chief Officer's boat there were 31 souls, including the one lady passenger of the Alnwick Castle, her baby, and the ship's stewardess. For over a week these people were tossed about in the open sea. Their experiences were horrible. The Atlantic was at its stormiest and the weather was bitter; water gave out; men went raving mad; one man jumped overboard; every day someone died of exposure. On Monday, March 26th, the coast of Spain was sighted. By this time ten of those in the boat had perished as a result of their privations and the remainder were so weak that they were unable to pull towards the shore.   It was only the following day that their misery was ended, for Spanish fishermen noticing their signals, put out to sea and brought them to the small fishing village of Carino, near Cape Ortegal.   There the villagers headed by the priest met them and took them to various cottages. in the neighbourhood where they were kindly looked after by the fisherfolk.   Later they were taken to hospital at Ferrol, from where they ultimately returned to England.

Those in the Captain's boat, too, suffered terribly. There were similar tales of death from privation, thirst, frostbite, and exposure. On the fifth day after the disaster, early on Friday afternoon, March 23rd, the survivors in this boat were picked up by a French steamer, the Fabre Liner Venezia. They were so weak that they could not climb up the side of the rescuing vessel and had to be hoisted up in slings.   In the lifeboat four bodies were left behind. It was impossible for the Venezia to wait for those also to be taken on board and given burial, for delay was dangerous in those waters where, any moment, another submarine might appear.

Weeks later a muster was taken of the survivors of the Alnwick Castle, and it was found that 40 of those originally on board had perished.  Of the lifeboats two were never seen or heard of again. 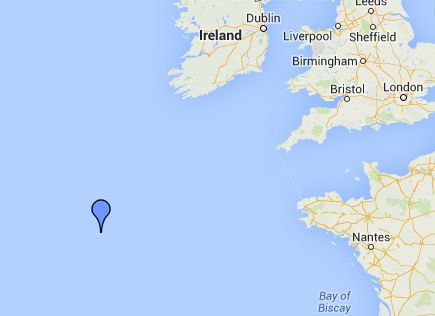 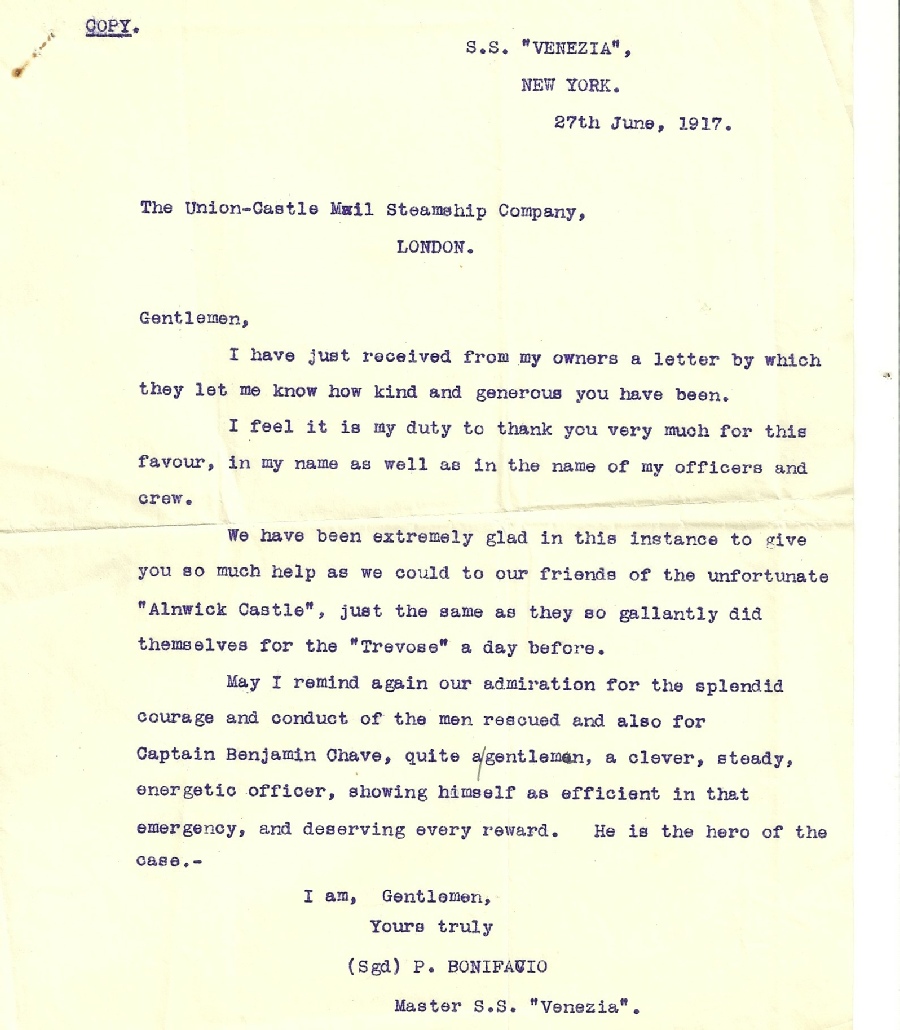 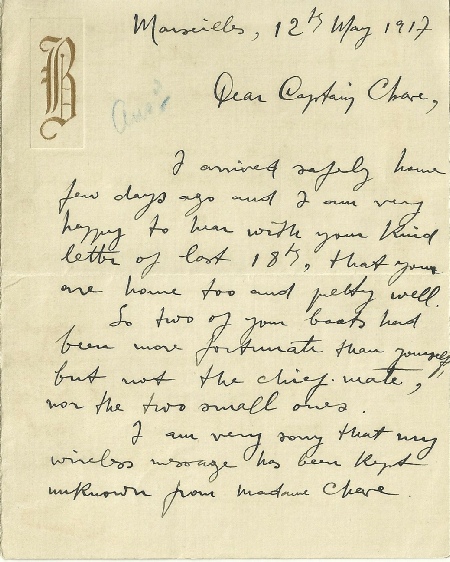 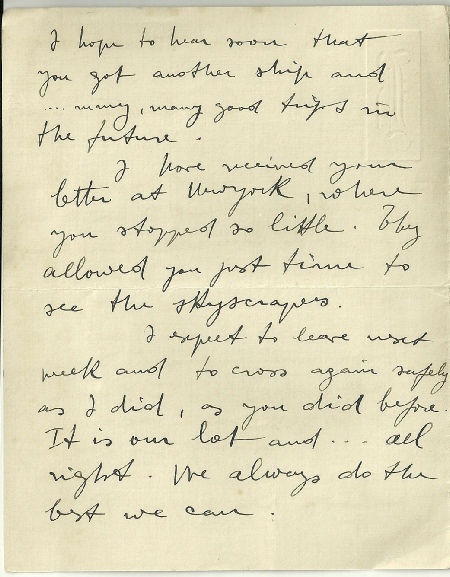 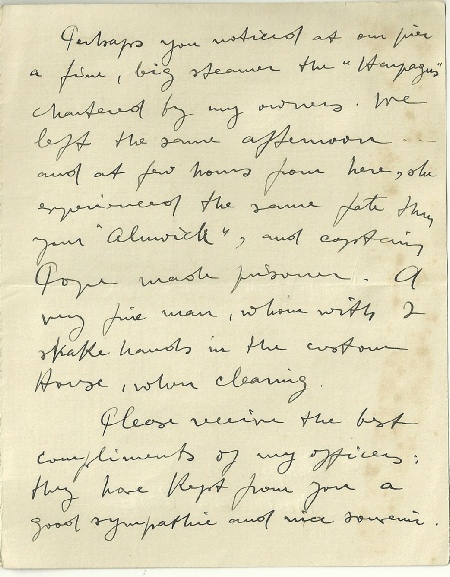 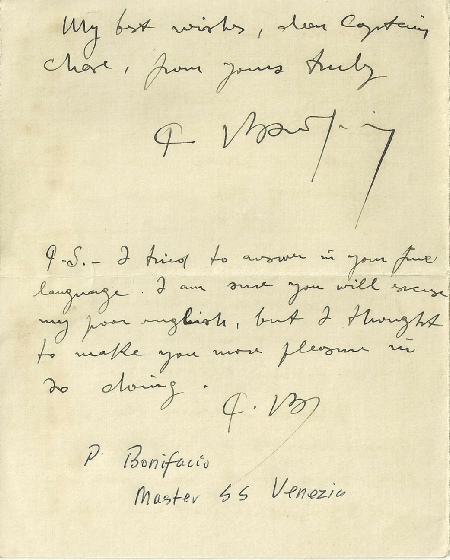 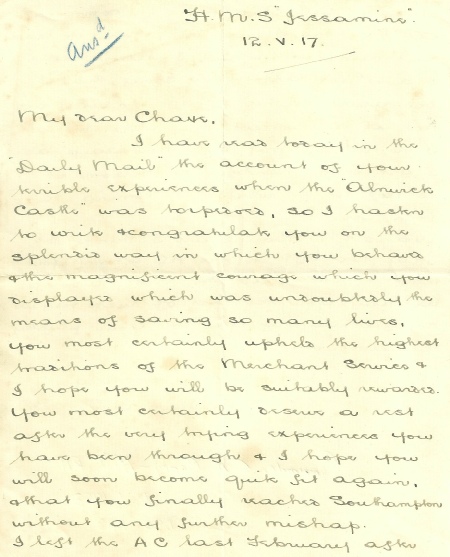 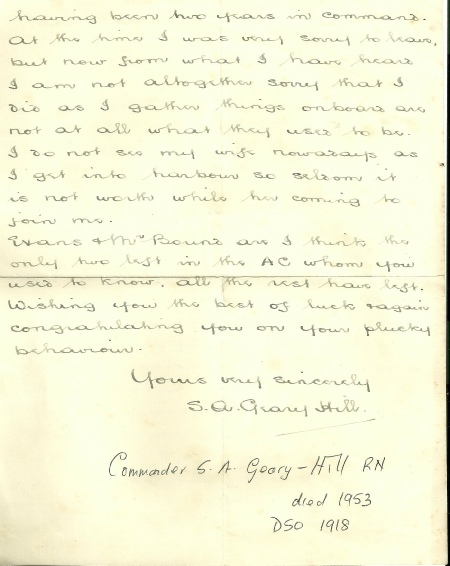 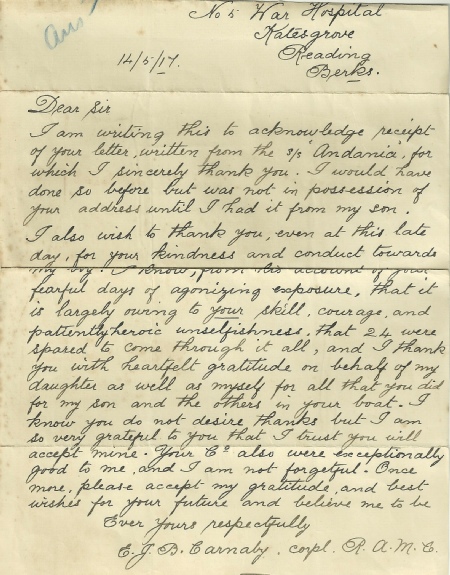 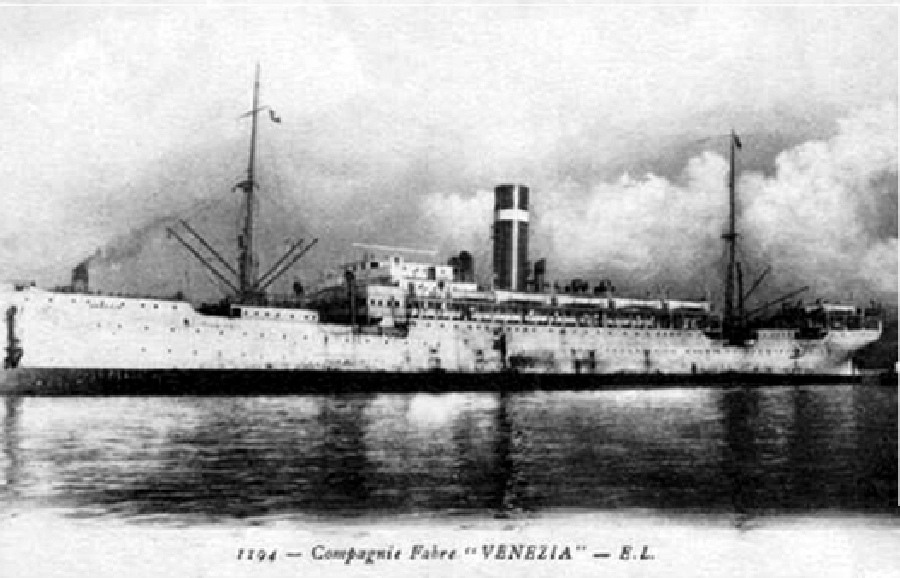 I arrived safely home a few days ago and am very happy to hear with your kind letter of the last 18th, that you are home too and pretty well.

So two of  your boats had been more fortunate than yourself but not the chief mate, nor the two small ones.

I am very sorry that my wireless message has been kept unknown from Madame Chave.

I hope to hear soon that you got another ship and … many, many good trips in the future.

I have received your letter at New York, where you stopped so little.  They allowed you just time to see the skyscrapers.

I expect to leave next week and to cross again safely as I did, as you did before. It is out lot and … all right.  We always do they best we can.

Perhaps you noticed at our pier a , fine big steamer the “Harpagus” chartered by my owners.  We left the same afternoon and at a few hours from here, she experienced the same fate than your “Alnwick”, and captain Pope made prisoner.  A very fine man, whom with I shake hands in the Custom House, when clearing.

Please receive the best compliments of my officers; they have kept from you a good sympathetic and nice souvenir.

My best wishes, dear Captain Chave, from your truly.

P.S. - I tried to answer you in your fine language.  I am sure you will sense my poor English, but I thought to make you more pleasure in so doing.

I have read today in the “Daily Mail” the account of your terrible experiences when the “Alnwick Castle” was torpedoed, so I hasten to write & congratulate you on the splendid way in which you behaved & the magnificent courage which you displayed which was undoubtedly the means of saving so many lives, you most certainly upheld the highest traditions of the Merchant Service & I hope you will be suitably rewarded. You most certainly deserve a rest after the most trying experiences you have been through & I hope you will soon become quite fit again, & that you finally reached Southampton without any further mishap.

I left the AC (Alnwick Castle)last February after

having been two years in command.

At the time I was very sorry to leave, but now from what I heard I am not altogether sorry that I did as I gather things onboard are not at all what they used to be.

I do not see my wife nowadays as I get into harbour so seldom it is not worth while her coming to join me.

Evans & Mr Bound are I think the only two left in the AC whom you used to know. All the rest have left.

Wishing you the best of luck & gain congratulating you on your plucky behaviour.

I am writing this to acknowledge receipt of your letter, written from the s/s “Andania”, for which I sincerely thank you. I would have done so before but was not in possession of your address until I had it from my son.

I also wish to thank you, even at this late day, for your kindness and condust towards my boy. I know, from his account of your fearful days of agonizing exposure, that it is largely owing to your skill, courage, and patiently heroic unselfishness, that 24 wre spared to come through it all, and I thank you with heartfelt gratitude on behalf of my daughter as well as myself for all that you did for my son and the others in your boat. I know you do not desire thanks but I am so very grateful to you that I trust you will accept mine. Your Co. Also were exceptionally good to me, and I am not forgetful. Once more, please accept my gratitude and best wishes for your future and believe me to be