IN the matter of a formal Investigation held at Glasgow, on the 22nd and 23rd days of March 1888, before JOHN McKIE LEES, Esquire, Advocate, Sheriff Substitute of Lanarkshire, assisted by Captains PARISH, of London, and FRENCH, of Liverpool, into the circumstances attending the stranding of the British steamship "CLAN OGILVIE," of Glasgow, in or near a rock north of Razzoli Island, Straits of Bonfacio, on or about the 8th day of January 1888.

The Court, having carefully inquired into the circumstances attending the above-mentioned shipping casualty, finds, for the reasons stated in the annex hereto, that the stranding of the steamship "Clan Ogilvie" was caused by the failure of the master, when passing through the Straits of Bonifacio, to obtain from time to time the correct position of the vessel by carefully observing the bearings of the three lights, Razzoli, Lavezzi, and Testa, which were all clearly visible. And it is of opinion that the master is deserving of severe censure.

We concur in the above report.

The "Clan Ogilvie" was a screw steamship, official number 86,718, built of iron at Linthouse, Glasgow, in 1882, by Alexander Stephen & Sons, and was owned by Mr. Charles William Cayzer, of Glasgow, and others, Mr. Cayzer being the managing owner. She was registered at Glasgow, her gross tonnage being 2424.95 tons, and net tonnage 1584.22 tons. Her length was 324 ft. 5 ins., breadth 38 ft. 1 in., and depth 23 ft. 8 ins. She was schooner rigged, and fitted with two engines of 300 h.p. combined. She had six boats,-two life boats, two cutters and two gigs-and five compasses, which were placed as follows, viz.: one pole compass on and above the upper bridge, one on the upper bridge, by which all courses were set and by which the courses were steered when the steam steering gear was used, two on the lower bridge, and one aft.

She left Bombay on 18th December 1887, bound for Marseilles, via Suez Canal, with a general cargo of about 2,500 to 2,700 tons, and a crew of 63 all told, and under the command of David Miller, who holds a certificate of competency as master, number 31163. Her draught of water on leaving was 21 ft. forward and 21 ft. 6 ins. aft. She appears to have been well found and in good condition on leaving Bombay. She was provided with Admiralty charts, corrected up to date in November last by McGregor & Co., of Glasgow, and with Admiralty sailing directions. She had on board six passengers. She passed through the Suez Canal and through the Straits of Messina, and at 8 p.m. on the 7th January last Tavolara Light bore S. 63° W. (magnetic), distant 11 1/2 miles, with wind fresh from N.E., and showery weather. The course was then N. 37° W. by compass, equal, as the master stated, to N. 29° W. magnetic, and the vessel was going full speed, about 8 1/2 to 9 knots. Ferro Light bore S. 63 W. magnetic at 9.55 p.m., distant by cross bearings 8 1/2 miles. The same course was continued till 11.40 p.m., when it was altered to S. 55 W. per compass, equal to S. 63 W. magnetic; and the bearing of Razzoli Light was then S. 41° W. magnetic, and of Lavezzi Light S. 69° W. magnetic, and Cape Testa Light S. 63° W. magnetic. The log book was lost with the ship, and the master told the Court that he gave these bearings from notes which he had made the day following the casualty.

A Lascar was on the forecastle head on the look-out. There were no Europeans amongst the deck hands of the "Clan Ogilvie," excepting the mates and carpenter, and it was stated it was the custom in passing through narrow waters to send one of the officers on to the lookout in addition to the Lascar. This was not done in this instance until midnight, when the third mate was ordered on to the forecastle, and immediately on going up there he saw a rock about two or three ship's lengths ahead. The engines were stopped and the helm was put to port, and the vessel came round so far that she struck the rock with her port bow. She glided off and immediately commenced to fill with water in the two foremost holds. It was said by the master and third mate that, directly before the ship struck, Testa Light bore S. 63° W. magnetic, or right ahead Razzoli Light two points on port bow, or S. 41 W. magnetic, and Lavezzi Light three points on starboard bow, or N. 84° W. magnetic. A reference to the chart shows that these bearings are not reconcilable. The lead was put over and no bottom found at 20 fathoms. The boats were immediately got out, and in about twenty minutes after she struck, the water being then up to the main deck forward and fast coming in to the engine room, the vessel apparently settling down by the head, all the crew and passengers got into the boats and remained at a short distance from the ship until daylight. The breeze had then freshened from the N.E., with a moderate sea. Shortly after they got into the boats they found that they were being carried close to the shore, and had to row occasionally to keep clear of the rocks. At daylight they found they were within about half a mile of Razzoli Lighthouse and to the northward of it. The vessel was then close under the lighthouse. The crew and passengers landed, and went up to the lighthouse. Some of the crew afterwards went off to the vessel, and brought away the passengers' luggage and some stores. The ship was then full of water, and the forepart of her submerged. She became a total wreck. No lives were lost.

It was stated on behalf of the master, that the vessel might have been carried out of her course by a westerly current, which he said had been found to exist on the previous afternoon. But it is quite clear to the Court that this could not have been the case after 11.40 p.m. The course was set at that time, S. 63° W. magnetic, with Testa Light right ahead. The same course was continued until the rock was reported ahead, and Testa Light was still right ahead, that is, on the same bearing. Any current therefore which might have existed could only have been in the line of her course and could not possibly have tended to this casualty.

At the close of the evidence the following questions were submitted:-

1. What was the cause of the stranding of the vessel?

2. What number of compasses had she on board, where were they placed, and were they in good order and sufficient for the navigation of the ship?

4. Did the master ascertain the deviation of his compasses by observation from time to time? were the errors of the compasses correctly ascertained, and the proper corrections to the courses applied?

5. Whether proper measures were taken to ascertain and verify the position of the vessel at or about 11.40 p.m. of the 7th January, when Razzoli and Lavezzi Lights were in sight?

6. Whether a safe and proper alteration was then made in the course, and whether due and proper allowance was made for tide and currents?

7. Whether a good and proper look-out was kept?

8. Whether the total neglect of the lead was justifiable?

9. Whether the vessel was navigated with proper and seamanlike care?

10. Whether the master and officers are, or either of them is, in default?

In the opinion of the Board of Trade the certificate of the master should be dealt with.

The foregoing questions were answered as follows:-

1. The stranding of the s.s. "Clan Ogilvie," which, it is clear to the Court, occurred on one of the rocks outlying to the northward of Razzoli Lighthouse, was caused by the failure of the master, when passing through the Straits of Bonifacio, to obtain from time to time the correct position of the vessel by carefully observing the bearings of the three lights, Razzoli, Lavezzi, and Testa, which were all clearly visible. The bearings which were given to the Court by the master as to the vessel's position at 11.40 p.m., and again immediately before the ship struck, were taken from notes made by him the day following the casualty. They are not in agreement, and the Court considers them unreliable.

2. She had five compasses: one, a pole compass, on and above the upper bridge; one on the upper bridge, by which all courses were set and steered when the steam steering gear was in use; two on the lower bridge; and one aft. They appear to have been in good order, and were sufficient for the safe navigation of the ship. The pole compass, which should have been the standard for reference, was never used by the master, who said that it was about two points out.

3. The compasses were supplied by White & Co., of Glasgow, and were adjusted by them in the Gareloch in December 1882, when the vessel was new. They had not been adjusted since.

4. It was represented that a deviation book was supplied to the ship, and the master stated that he had taken frequent opportunities of ascertaining the deviations of the compasses, and had duly entered them in the book, which was lost with the ship. He also stated that the errors were correctly found and properly applied, but the Court has nothing beyond this statement to enable it to say how far this was the case.

5. According to the master, cross bearings were taken at 11.40 p.m. of Razzoli and Lavezzi Lights, which was a proper measure for verifying the position of the vessel. But it is clear to the Court that those bearings, as given to it by the master from notes made from recollection the following day, are incorrect,

6. A safe and proper alteration was not then made in the course. Even had the vessel been in the position assumed, the course would have been of doubtful safety, inasmuch as, unless altered, it would have brought the vessel exactly over the Lavezzi rocks. An allowance of 2° was made for a probable current.

7. A good and proper look-out was not kept. A Lascar was on the forecastle head as look-out man, and the third mate was sent there just before the vessel struck, and at once saw the rock two or three ship's lengths ahead. In navigating in narrow waters, such as the vessel was then passing through, a Lascar was not a sufficient look-out, and a European should have been sent there earlier. It was stated it was the custom of the master to place a European there in such circumstances, but unfortunately it was not done so soon as it ought to have been in this instance.

8. Under these circumstances, and the three lights of Razzoli, Lavezzi, and Testa being clearly visible throughout, there was no necessity for using the lead.

9. It cannot be said that the vessel was navigated with proper and seamanlike care.

10. The Court finds the master in default in regard to the loss of this vessel. With the three lights of Razzoli, Lavezzi, and Testa in sight there should have been no difficulty to a skilful navigator in taking the vessel through the Straits in safety, by duly noting the bearings of the lights and position of the ship. It appears, however, that the master was at his post throughout, and that there was no want of personal attention. While finding him therefore in default, the Court, having regard to his long good character and to its being his first voyage in command, is not disposed to deal with his certificate, considering that the case will be sufficiently met with a severe censure.

In the opinion of the Court no blame attaches to the officers.

We concur in the above. 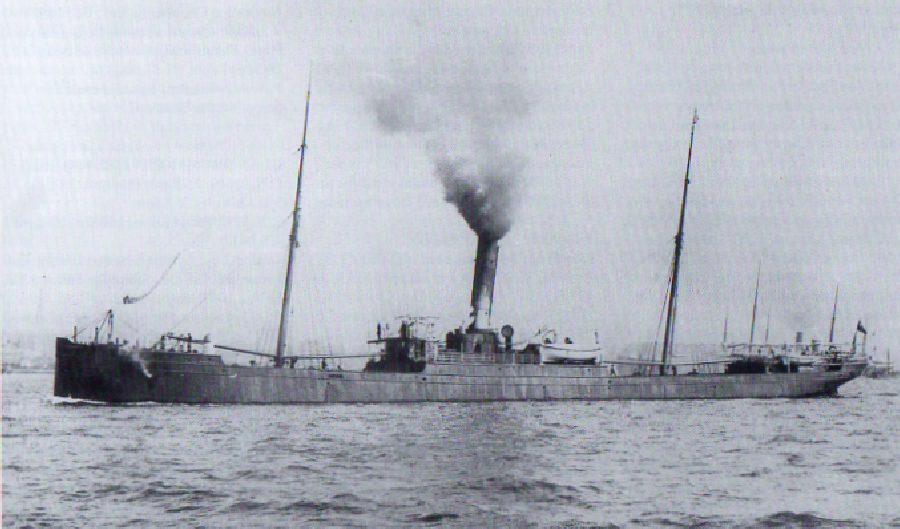 No known picture of Clan Ogilvie exists. This is her identical sister Clan Forbes