Vice Admiral A F B Carpenter 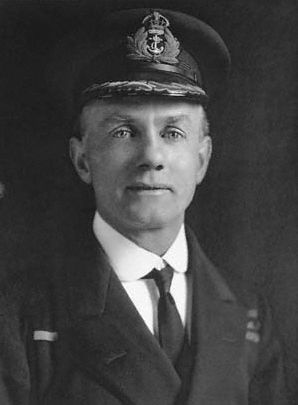 Naval officer, was born at Barnes, Surrey, on 17 September 1881, the only son of Lieutenant (later Captain) Alfred Carpenter RN and his first wife, Henrietta, daughter of G. A. F. Shadwell. His father in 1876 received the Albert medal and the Royal Humane Society bronze medal for rescuing a man overboard while serving in the Challenger, and while in command of the marine survey of India, at the time of the Third Anglo-Burmese War, was among the first naval officers to be appointed to the DSO. His grandfather Commander Charles Carpenter in 1814 assisted in the capture after a long chase of the American privateer Rattlesnake. His uncle was the writer Edward Carpenter.

On leaving his preparatory school Carpenter entered the Royal Navy as a cadet in 1897. The following year as a midshipman he saw service in Crete during the massacres, and in 1900 he was with the naval brigade landed during the Boxer uprising in China. After promotion in 1903 to lieutenant he specialized in navigation, becoming a lieutenant-commander in 1911. In the year preceding the war he gained experience in staff duties on a war staff course and received the thanks of the Admiralty for various inventions of a specialized nature. In the same year he was awarded the silver medal of the Royal Humane Society for saving life at sea.

The outbreak of war in 1914 found him in the Iron Duke on the staff of Sir John Jellicoe, but in November 1915, after his promotion to commander, he was appointed navigating commander in the Emperor of India. In 1917 Roger Keyes was appointed director of plans at the Admiralty and Carpenter, who had been Keyes's navigating lieutenant in the Venus, successfully begged to be taken on his staff. There he was engaged in the secret plans for attacking Zeebrugge and Ostend with the purpose of blocking the exits from the submarine and destroyer bases. Keyes in his Naval Memoirs wrote: ‘Commander Carpenter's gift for going into the minutest details with the most meticulous care, greatly assisted me in preparing a detailed plan, and orders, which embodied the work of several officers’

In selecting Carpenter for the command of the Vindictive Keyes knew he was choosing a man familiar with all the main phases of the operation. The whole conception of the attack on Zeebrugge and Ostend had the spirit and elements of the cut-and-thrust raids of Drake and Hawkins. The chance of favouring winds and currents coinciding with the eve of St George's day 1918 gave the expedition an additional romantic appeal. To Keyes's signal ‘St George for England’ Carpenter replied ‘May we give the Dragon's tail a damned good twist’

Carpenter had been promoted to acting captain for the expedition but his duties were confined to the command of the ship and Acting Captain H. C. Halahan, who was senior to him, was in command of the landing force designed for attacking the mole at Zeebrugge, partly to divert attention from the block ships and partly to destroy enemy armament. Carpenter's part in bringing the Vindictive alongside the mole was vital to the success of the operation and his achievement in doing so is not to be underrated even though he brought her 340 yards beyond her planned position and thus out of reach of her primary object: the guns which commanded the approach to the harbour. It was characteristic that Carpenter freely admitted this error was entirely his, explaining that it was due to the great difficulty in recognizing the objects on the mole amid the shell and smoke flare. Keyes, in his first dispatch, paid tribute to Carpenter's personal share in the attack, pointing out that, from all reports he had, Carpenter's calm composure when navigating mined waters and bringing his ship alongside the Mole in darkness, and his great bravery when the ship came under heavy fire, did much to encourage similar behaviour on the part of the crew, and thereby contributed greatly to the success of the operation.

His skill in bringing his ship away after the action was also highly praiseworthy.Carpenter, as the senior surviving officer, was asked by Keyes to make recommendations for conspicuous gallantry, but he replied that he felt it would be invidious to select individuals where everyone had acted so splendidly. Nor would he take part in the ballot which was then arranged for an officer and rating for the VC in accordance with rule 13. In this ballot, in which officers could only be elected by officers, Carpenter received one more vote than Commander Harold Campbell of the Daffodil and was thus awarded the cross. He was immediately confirmed in his promotion to captain and later received the Croix de Guerre with palm and was made a chevalier of the Légion d'honneur. His detailed account of The Blocking of Zeebrugge was published in 1921.

After Zeebrugge, Carpenter was sent on a lecture tour of Canada and the United States (1918–19) and on his return, after a brief time in the naval intelligence department, on 1 October 1919 he was given command of a war course at Cambridge for naval officers. In 1921 he took over the command of the light cruiser Carysfort and in October 1923 was given charge of the senior officers' technical course at Portsmouth. From February 1924 to September 1926 he held the triple post of captain of the dockyard, deputy superintendent, and king's harbour master at Chatham. After a period on special duty at the Admiralty he was given command of the Benbow in August 1927, transferring to the Marlborough the following May. He was promoted rear-admiral in August 1929, at a time when opportunities for employment in flag rank were limited, and placed on the retired list, on which he was promoted vice-admiral in 1934.

During his retirement Carpenter interested himself in the merchant navy, particularly in the training of its junior officers and cadets. He introduced the idea of a training ship, the St Briavels, in which they could have practical experience in handling, manoeuvring, and mooring ships, which was necessarily in the hands of senior officers on actual voyages.

During the Second World War he commanded the 17th Gloucestershire battalion of the Home Guard from 1940 to 1944. He was appointed a deputy lieutenant for Gloucestershire in 1946.

He married in 1903 Maud (d. 1923), daughter of the Revd Stafford Tordiffe, rector of Staplegrove, Somerset, and they had a daughter. He married second, in 1927, Hilda Margaret Alison, daughter of Dr W. Chearnley Smith.

Lean and ascetic in appearance, Carpenter, brought up in the traditions of the navy, although somewhat conventional in his outlook, embodied many of the highest qualities of the best type of naval officer. Disciplined in mind, courageous and calm in action, energetic and inspiring as a leader and generous in his praise for subordinates, he also possessed an unusual gift for the mastery of detail and exactness in planning. He died at his home, Chantersluer, St Briavels, Gloucestershire, on 27 December 1955.