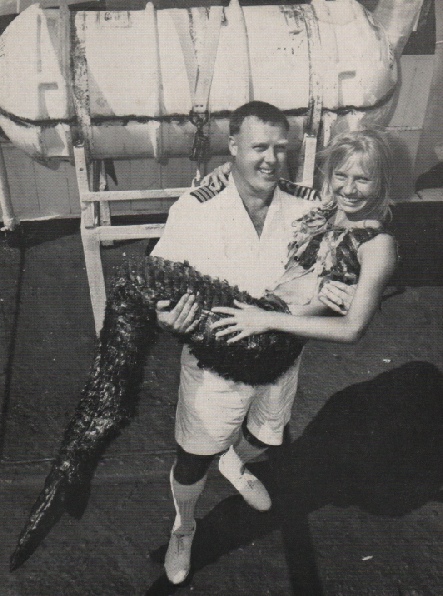 I sailed with Stan who we fondly knew as ‘Stainless’. He was C/E/O and I was 3/O on Riebeck Castle in Sep’69. I have a lovely story to tell you:

We used to have a drink in the bar and one day when on a fruit run northbound from SA, he told us that he really liked sausages made in Dundee but on his last leave, his butcher had failed to supply him with these. However he had promised to let Stan know when he gets them.

At that stage of the voyage, we would also be running a raffle whose winner would have rightly guessed the first discharging port in Europe and win a case of Tenents Lager.The news would come through the radio office and everybody was very eager to hear from the Bridge.

Part of my job was to help 2/0 fix the ship’s position at noon and then provide the information to the various heads of departments. The first of these was your Dad and as I approached his office, I shouted: Chief I’ve got news for you’ to which he retorted ‘Which discharging port will it be then?’

‘No Chief it’s not about the next port. It is from your butcher. He’s got your sausages’

He had a bowl of fruit in front of him and at that threw an apple at me laughing. In his best Scottish he shouted ‘Take that you wee ‘fatherless’ (clean version) rascal.

This is among my fondest memories of my life at sea

Yes I sailed with Stan for quite a few years. I came up the ranks under him till he became Chief and I was promoted to Senior Second.

He left the ship because I believe his wife was very poorly that was in about 1967/8. He had come up the hard way through the ranks whereas I was fast-tracked by " the alternative route". He never really approved that system, thought it was too quick. The trouble was that Clan Line were very short of " ticketed men" at the time and needed to get them to man their ships. He was formidable.

I knew him as " Stainless Steel".