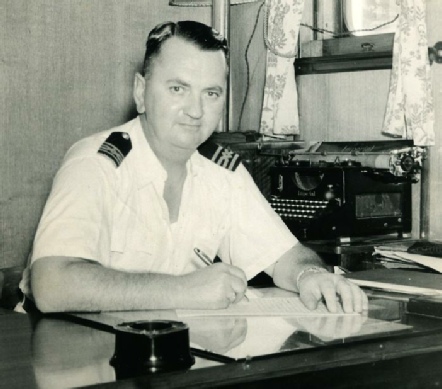 Samuel Kent Williams was brought up at Morfa Nefyn, where he spent a happy childhood playing on the nearby beach, and sailing his little boat. Coming from a long line of Master Mariners and from the close knit maritime community of Morfa Nefyn, it was small wonder that he chose a career at sea.

Samuel’s Great grandfather Robert Williams was captain of the Two Sisters, a small coastal trading vessel. His grandfather John Williams was master of the Messenger, (he died on board her in 1890 when she was at Belfast) His father Samuel Williams and his three brothers Robert, John Richard and Evan were all Master Mariners.

We are fortunate in that Sam wrote an account of his seafaring career, this was due to his association with the ‘Adopt a ship’ scheme run in the early sixties. The school that adopted his ship, Chingford County School, Chingford, Nr Maidstone, Kent.

Capt Sam Williams had an interesting and industrious career spanning some forty years, sailing to the four corners of the earth.