I have just heard in a letter from his children Catherine, David and Alan that he died on Wednesday 12th June 2019 having suffered a cardiac arrest subsequent to spinal surgery in April.

John's wife Barbara (nee Wheeler) was a Nursing Sister with U-C and pre-deceased him in 2000.

He had been a great supporter of our reunions and also joined us on a couple of our World Cruise adventures.

Funeral details are not yet known, but donations in John's memory may be made to the Parkinsons Society c/o the Funeral Directors,

I sailed with both John and Barbara, two lovely people. RIP.

Very sad. May he rest in peace. Amen 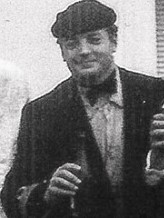