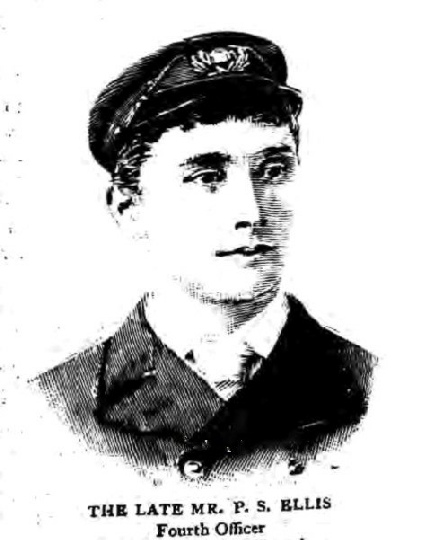 The 4th officer, whose body was recovered at Ushant, was identified by Charles Marquardt.

Aged 22, he was very tanned, of a sturdy Constitution, he was not less than 1m95.

He belonged to a Scottish family in Liverpool, but had resided in Rutherglen, Scotland, near Glasgow for a few years.

Mr. Ellis had only joined Drummond Castle in January of the same year. He became an experienced officer in steam navigation.

Passionate about France, his literature and Zola in particular, which he translated to the passengers excerpts in English...

Article extracted and translated from  The Dispatch of Brest on 21 June 1896:

A reader of the journal, who made the trip from Las Palmas to London last March on a boat where the unfortunate officer Ellis served, communicates the following interesting notes on this officer:

"Aged twenty-five, tall, handsome, of excellent intelligence, speaking as easily in French, Spanish, as in English. This officer made a duty to be an agreeable companion of the French who were on board.

He was a passionate admirer of Zola, and in the evening, when the fog or the cold did not allow us access to the bridge, he gathered us at the smocking room and translated in English some novels of Zola that I had lent him.

If he was not certain to understand the full value of the images which love to serve our great and illustrious master, he asked me for the explanation, and then translated them into English so precisely, that he excited his countrymen. He asked me to leave him the dream, which he proposed to give me a translation into English.

He owned books by Victor Hugo and Dumas, as well as Baudelaire and Verlaine.

After having successfully undergone the tests and examinations required of the Master, he had to settle for the employment of the 4th officer, having to assist his family.”