Another attempt was made by the tug Mana, last night to pull off the Elginshire, but failed to move her. The Koputai arrived this morning from Dunedin, and the Union Company's s.s Herald also is there. A combined attempt will be made at noon. Some of her cargo was thrown overboard yesterday, and today a line is being rigged to sling the wool ashore, the vessel being near enough for this operation. The Elginshire is principally held on the port side, and at the stern-post. Both of the propellers are out of the water at low tide, and the engines are practically useless. There is deep water on the starboard side, and the shoal reef on the port side, and at the bows. The general opinion is that she will not be got off. Crowds are driving out to see her. Mr Moore, the representative of the Company, Captain Ticehurst, Mr D. Craig, surveyor and Chairman of the Underwriters Association, from Christchurch, and others are here, taking an active part in the work at hand.

Mr Richmond Sturdy, owner of some properties in Hawke's Bay and Wellington, was a passenger from England by the Elginshire, and was enabled to get to Timaru on Wednesday, in time to catch the express train north. Mr Sturdy states the vessel struck the reef exactly at eight o'clock yesterday morning. The fog was so dense that nothing could be seen in her position. They could her persons speaking on shore quite distinctly, but could not see them. The vessel, is making water at both ends.  There were only four passengers on board besides himself.  Mr Mill, from Oamaru, is on board the steamer. There was no commotion on board when the vessel struck, but everyone stood to his post and obeyed Captain Millar's commands.  The weather was beautifully fine and clear when they left Oamaru shortly after midnight on Wednesday morning, and they were steaming very slowly before they struck, the telegraph being kept at work constantly.  The vessel appears to have followed a course which led her inside the shoal to the southward of Dolerite Reef.

All around the spot where the vessel now lies are immense clumps of kelp, which are sure indications of the presence of reefs. The Elginshire had on board twenty thousand carcasses of mutton from Rockhampton (550 tons meat), besides a quantity of wool, hides and sheepskins. She had taken in ten thousand carcasses of lamb at Oamaru, and was going to Timaru for twelve thousand more carcasses before leaving for Port Chalmers to finish up loading for England.

Captain Millar has been to New Zealand on several previous trips, and his navigation of the Fitzroy river and mud flats at the entrance to Rockhampton Mr Sturdy speaks of with unlimited praise.

Mr Sturdy secured a number of photograph negatives of the ship as she lies on the reef, These he will have printed while in Wellington. They were taken by a "Kodak" camera.

The meat on board the Elginshire is insured for £18,000 in London.

This morning four surf boats have been taken down to bring up the wool; this will take two days. The weather is fine, and there is a moderate swell. The captain still holds for the owners. 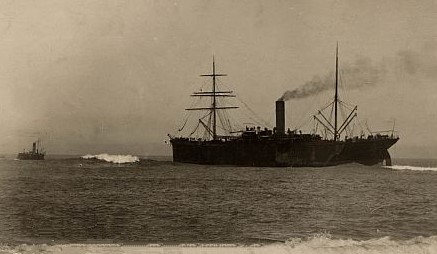 The discharging of the Elginshire is proceeding rapidly. All the wool is landed and the preserved meat is transhipped into a schooner. The tallow and pelts were thrown over and a gang of men is collecting them on the beach. At 3 pm. two tugs and the Union Steamship Company's  s.s. Brunner will try to pull the Elginshire off. If this fails another attempt will be made tomorrow, when the spring tide will be higher.

The attempt to pull the steamer off the Normanby reef at high tide had to be abandoned, the wind changed. To assist in landing the cargo the schooner Comet was taken by the Koputai from Timaru to the scene of the stranding, and the remainder of the wool and some cases of preserved meat were placed on board her. The Elginshire now looks very like a wreck. as sheepskins, carcasses of mutton and casks of tallow and boxes of preserved meats can be seen for a long distance down the beach to the south.

Notice of abandonment was given, and Captain Ticehurst took possession on behalf of the Underwriters. The crew was taken off, but the engineers and firemen were re-engaged, and kept the refrigerators and pumps going. The steamer is not making much water. An effort will be made to save the meat by landing it here and railing it to various freezing works. Thousands of people congregated to witness yesterday's pull by the two tugs and the 335 tons  s.s Brunner. The inquiry will take place on Thursday or Friday.

The water has got the upper hand of the Elginshire refrigerator, the main engines are stopped, and the engineers have come ashore, Nearly 3000 carcasses, 90 bales of skins, and the ship's piano were landed last night. There is a powerful smell from the forward compartments. A local scientist in the North Otago Times suggested that the Elginshire could be floated off by means of compressed air.  That sufficient compressed air could be pumped into her chambers by her refrigerated machinery to force all the water out of her.

There is eleven feet of water in the Elginshire. A ketch went for meat this morning and got none.

The Elginshire enquiry is adjourned till tomorrow. It will be before Mr Wray, R.M. and Captains Sutter and Thompson (Port Chalmers), Assessors. The application alleges careless navigation. There is no salvage work today, as there is too much swell.

Captain Clarkson, harbormaster, gave evidence that a thick fog came on at Timaru at 2 a.m. Ike Bradley, a waterman, who had been engaged at the wreck a good deal, spoke of a current inshore of three to four knots.

The decision of the Court is that Captain Millar R.N. committed error of judgment in not altering his course east, instead of north-east, as to take him away from land when he sighted the shore at 7 a.m. He should have tested his compasses after leaving Australia. The only explanation of the casualty was the dense fog, the deceptive current, and the defective chart, which showed a ten fathom line nearly three miles off, whereas it was close to a shoal reef. There had been no wrongful act of default. All the certificates were returned. The captain has to pay the costs.

A man named George Durham, clerk to the Port Salvage Company, who had been on board the stranded steamer Elginshire, was found dead on the 'tween-deck in the after-hold of the steamer about 6.30 this evening. The men on board missed Durham at 12:10, but concluded that he had gone ashore. Durham was a married man. His wife and children reside at Mansford Bay. He was secretary to the Port Chalmers School Committee and agent for the Port Chalmers Building Society, &c. The jury found an open verdict. The deceased was strangled by the bight of a rope over the beam, his feet being a few inches from the deck. Nothing is known to suggest suicide, and he might have tripped off a loose pipe-head into the bight. It is surmised that, walking along the deck, he stepped on the ventilator tube; that this rolled under him, and he fell forward, his head going into the bight of the rope.

Attempt to refloat the steamer. She is firmly stuck aft.

Mr I. J. Bradley and party visited the Elginshire on Friday to recover some of the hatches, and to see if they corresponded with those found off Akaroa. The party found all the hatches of holds Nos. 1 and 2 gone, except one of hatch No. 2. The hatches of holds No. 3 and 4 are just as they were taken off and left. The steamer looks a pitiful object just now. Her bow lies over to the starboard at an angle of about 45 degrees; the deck forward of the funnel is in a similar position with the starboard rail under water; the main and tween decks are touching on the starboard side, which is completely gone as far as the funnel. All the stanchions are twisted up like bits of string. Her huge beams have in some places found their way through her deck, and stand prominently above them. Yet, from her funnel aft, the ship stands upright; all her fittings, etc, seem just the same as when they left the builders' hands. To show how free of motion this part of the ship is bottles and dressers are still standing in their proper position. The party brought five hatches away which were sent on to Lyttelton by the Janet Nicoll on Saturday night.

Messrs Fischer and Hardy have in their show window two excellently clear photographs of the wreck of the Elginshire, showing the two sides separately. The port side view shows the snapped-off bow lying to the left, some distance away from the rest of the hull, the deck titled to the southward. This mass must have needed a great force to move it bodily so far. It is odd that the bow was not canted the other way, deck to the north. 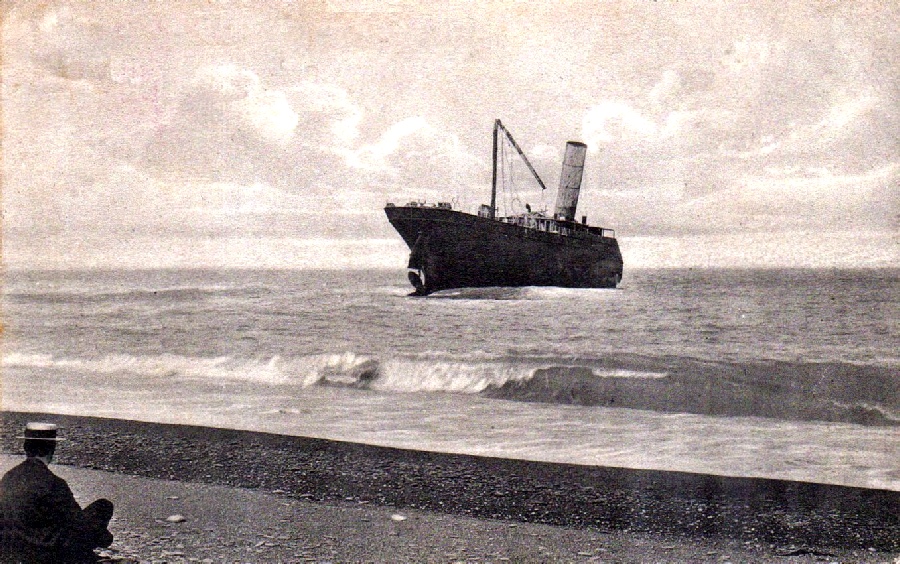 "She experienced a dense fog along the coast and got off course landward. She was observed off Normanby, sounding her fog horn going, close to the beach by a platelayer, who ran down and sang out to her. He was asked where they were, and told them five miles south of Timaru, and to stand out to sea southward from this spot straight, and clear the beach. Just north the Dolorite reef runs out half a mile, and the steamer turning her head seaward, went on this."

The news was brought to town, Timaru, at 9.30  by a horseman, 9.30 Mr Godfrey Ellis, junr. and reported that a large three-masted steamer was ashore near Normanby. Earlier Mr Simmonds, of Compstall, Kingsdown, who happen to come into town, reported that he had heard a steamer hooting off St. Andrews.

The S.S. Elginshire, a Home liner, due here from Oamaru this morning, March 9 1892, is ashore, stranded right opposite the Normanby bridge and railway station, five miles south of Timaru. A thick fog lies over the sea, and there is a moderate swell. The steamer's whistle blew about seven o'clock and shortly afterwards she commenced firing her minute guns. She can be heard grinding on the rocks. The steamer was lying right across the reef with her bow to sea. She is on the only dangerous spot between where she lies now and Oamaru.

Cleared outwards. March 8 Elginshire, s.s. 4579 tons, W.A. Millar, R.N.R., for London, via Timaru and Port Chalmers. New Zealand Shipping Company and National Mortgage and Agency Company, agents. She is expected to get away at midnight.

The wreck of the steam ship Elginshire, off Timaru.

Some of the ship’s fittings were salvaged and the South Canterbury Museum has a Pewter Coffee pot from the Elginshire. There is a street in the Washdyke Industrial Park with a street being named - Elginshire Street, named after the vessel. 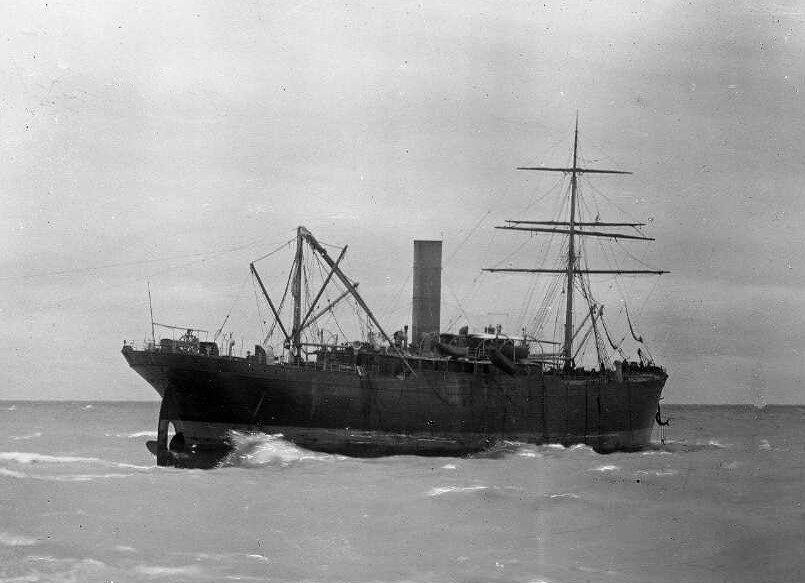