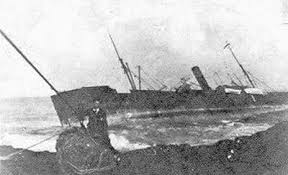 FINDING of Court of Inquiry, this 7th day of April, 1898. on proceedings taken before JOHN TRURO WYLDE, Resident Magistrate of East London, Captain L. A. MUNN, and Lieutenant W. STEWARD, R.N., into the circumstances attending the wreck of the S.S. "CLAN LINDSAY," on the 19th March, 1898, at Mazeppa Point, about fifty miles east of East London.

The "Clan Lindsay" was a screw steamer of 2,668 registered tonnage, official No. 105,997, and belonging to the Port of Glasgow.

It appears, from the evidence before the Court, that she sailed from East London on the 19th March, 1898, bound for Port Natal with a general cargo, and took two passengers: was under the command of Joseph Schofield, whose certificate is No. 91,843. That on leaving the port the weather was fine, but overcast ; the vessel was apparently well found ; and while the time used for the departure of the vessel is not consistent with that provided by the port authorities, the Court is of opinion she left the roadstead, as stated by the port officials, at 3.30 p.m. that day, and proceeded upon a course S. 84° E., altered at 4 o'clock to S. 85° E., at 4.45 to N. 79° E., and that the Black Beacon at the Kintza River was abeam at 5.5 p.m., the speed over the ground being 10.2 knots; that Cape Morgan was abeam before dark, and at 7 p.m. the course was altered to N. 72° E., and at 8.30 to N. 67° E., when at 8.35 she struck the rocks, the helm having previously been put hard-a-port by order of the third officer, who was on watch, and which act was confirmed by the master.

It appears, upon laying off the courses steered upon the chart handed in, and allowing a speed over the ground of 10.2 knots, and a deviation of two degrees West, that the ship, at the time of taking the ground, would have been 1-9 miles off the shore, abreast of the spot where she struck.

That the master took no satisfactory means to ascertain the position of the ship from the moment of leaving port to the time she took the ground at Mazeppa Point; that he, having looked for the land for two or three minutes, decided to alter course half a point towards the shore when within five minutes of the breakers; that no leadsman was in the chains, although land had been seen and reported before 8, and the officer of the watch asserts he saw it from 8 to 8.30.

The deviation had not been ascertained since discharging some iron at East London; that the chart was not marked up in such a manner that the officers on watch could ascertain the position of the ship from it, nor could they see it after dark without disturbing the captain, it being kept in his room.

Bearing in mind that the deviation was not accurately known, nor was the ship's position verified, the Court consider the courses steered after dark were unsafe, especially in a locality where it is known that currents of varying strength, and, when close in shore, of uncertain direction, exist. That, owing to possible inaccuracies in the deviation used, or bad steering, or the effects of currents, the "Clan Lindsay" was set 1.9 miles nearer the shore than the position on the chart would show.

The Court, having regard to the circumstances above stated, finds as follows:

That the master was in default

1. In setting an unsafe course.

2. In navigating his vessel with insufficient and un-seamanlike care.

3. That he neglected to use the lead.

4. That he neglected to use the log to ascertain speed.

5. That he neglected to allow for the set of the current in verifying the position of his vessel, from time to time, on the courses set.

6. In neglecting to take cross-bearings of the land; and that for these defaults his certificate be suspended for six months.

That the chief officer is censured for neglecting to verify the ship's position before dark, and to report the proximity of land to his relief at 8 o'clock.

And that it is considered the third officer should have ascertained the vessel's position on the chart before taking charge of the deck from the chief officer.

At the request of the captain, the Court desires to note that it has not any objection to the said Joseph Schofield being allowed a mate's certificate, should the above order be confirmed.