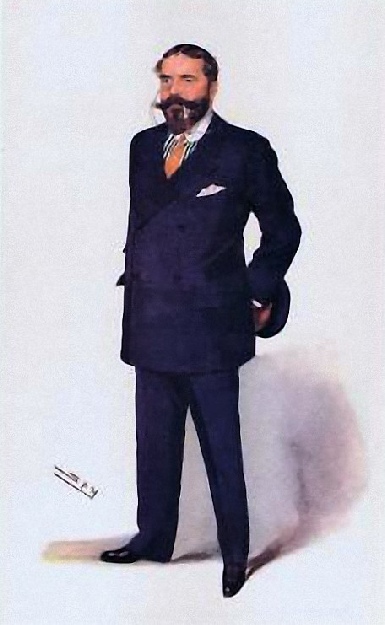 Robert Paterson Houston was born in 1853, the son of a Renfrewshire marine engineer. In due time he also became a marine engineer after being apprenticed in Liverpool. In 1877 he used an inheritance to become a shareholder in a small packet steamer. The venture was successful and he started his own, R.P. Houston & Company in 1880. Each ship was bought by a separate company with the traditional 64 shares and RPH provided management services.

After initially operating to the East Indies, RPH switched to South America in 1884 Built his first ship with facilities to carry frozen from the Argentine to the UK. Passenger services were added in 1885 and a service between New York and South America in 1899.

In 1898 the British & South American Steam Navigation Co Ltd was formed and the four existing ships, plus two on order were transferred to the new company. RPH remained managers. The following year the Boer War began and RPH became completely involved, with his whole fleet being chartered by the British Government. This experience led Houston to introduce a post-war triangular service Liverpool – South Africa – South America. This created a furious response from the existing members of the South African Shipping Conference that led to a bitter court case where Houston was successful but it was not until 1904 that his company was admitted to the Conference.

In 1914 the British & South American Steam Navigation Co Ltd owned 20 ships and although the company only lost 6 of these vessels, it was unable to replace any of the older units in its fleet, as the wartime construction was not up to Houston’s exacting standards. As Houston was 65 years old, he decided to retire and sold the entire RPH business to Cayzer, Irving & Co Ltd for £4 million.

As part of the acquisition, British & South American Steam Navigation Co Ltd became a Clan Line subsidiary. The fleet was largely replaced by second-hand ships and inter-group transfers, some of which retained their Clan Line names.

The South American services were sold to Kaye, Son & Co in 1926. This company was a Royal Mail Line subsidiary operated by the Kaye family. Rather confusingly they continued their operations as “Houston Line to South America”. To overcome the identity problem, the RPH company changed its name to Houston Line (London) Limited  in 1932.

At the outbreak of WW2 the fleet consisted of 10 ships with either “H” or Clan names. Only 3 remained at the end of the war. Replacements were purchased, again using both name styles. Houston and the other group companies were merged into British & Commonwealth Shipping Company in 1956. The ownership of the individual ships became increasingly blurred, with transfers being made to meet voyage requirements and Houston Line had disappeared by 1970.