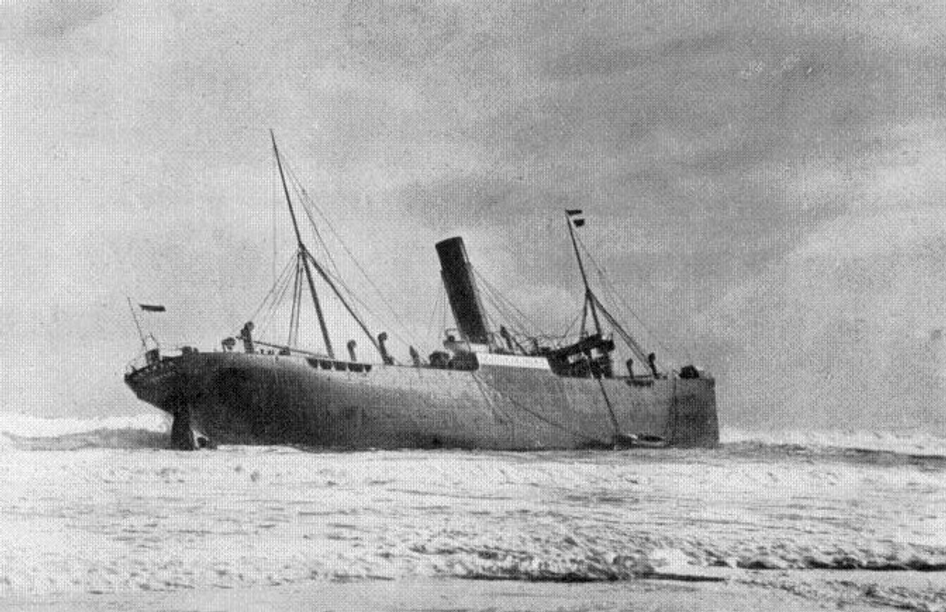 Finding of the COURT OF INQUIRY held in the Oddfellows' Hall, Loop Street, Cape Town, on the 5th June, 1901, for the purpose of investigating the circumstances attending the stranding of the British steamship "HERMES" on the Blaauwberg Beach on the morning of the 13th day of May, 1901.

The Court was composed as follows:

1. George Blackstone Williams, Acting Resident Magistrate for the district of the Cape. (President.)

The British registered steamship "Hermes," 2,109 registered tonnage master, Josecito Nelson Grose; owners, R. P. Houston & Co. arrived in Table Bay from Rosario on Sunday, the 12th of May instant, and anchored at 12 noon. Half an hour later she shifted her berth owing to the proximity of other ships and dropped the starboard anchor in 10 fathoms, the port anchor being ready to let go if necessary Green Point Light being N. 87 W., Robben Island N. 16 W., and Devil's Peak S. 37 W. Deviation 3 E., ship's head N.N.W. there being 70 fathoms chain on the starboard anchor, the wind blowing strong from the north-west with a high sea. There was no communication with the shore, nor with the port officials. The evidence shows that sufficient pressure of steam was kept up throughout. Up to 1.30 a.m. the following day the ship's position remained unchanged. At 1 a.m. the gale appeared to be increasing, and the captain was called by the chief officer, who had previously been called by the second officer. Instructions were asked to let go the second anchor. The captain, however, did not come on deck, and did not consider it necessary to let go the second anchor. Some little time after this, the second officer (on watch) lost the bearing lights owing to heavy rain squalls. About 2 a.m. or somewhat later he saw a white streak on the starboard quarter he at once called the chief officer, who called the captain the latter immediately came on deck, and about ten minutes later the ship struck on the Blaauwberg Beach about 1 1/3 miles from the anchorage.

No entries were made in the night order book, but verbal orders were given to the chief officer that the master was to be called in case of emergency. These orders appear to have been carried out by the chief officer.

We are of opinion that when called at 1 a.m., having regard to the conditions of the weather reported to him and the scope of cable on the one anchor (70 fathoms), the master should have come on deck, especially as the chief officer had suggested that the second anchor should be let go. 70 fathoms were not, in the opinion of the Court, sufficient scope for one patent anchor. Considering the state of the weather more cable should have been veered on the one anchor or the second anchor should have been let go.

It was about 2.10 that the captain was called the second time, and he immediately came on deck and at once realized that the ship was in danger. From the evidence we think that, as the master was on deck ten minutes before the ship struck, either the second anchor should have been at once let go or that the engines should have been put at full speed for a longer period than they were.

We consider that the chief officer all through did all in his power in the interest of the ship and acted throughout in a seamanlike manner.

As regards the second officer, we find that he carried' out the orders left with him, but we are of opinion that when he lost the bearing lights he should have taken some precautions to ascertain whether the ship was dragging. We are also of opinion that the helm should not have been kept hard a starboard, but an attempt should have been made to steer the ship according to the master's instructions. When he saw the streak of light he should at once have called the master without first going to the chief officer, although he had instructions to call the latter. He should also have rung "stand by" before he left the bridge, or have used the engines on his own responsibility. We find that he did not take a cast of the lead before the ship struck, and that the entry to that effect in the log book subsequently made reflects no credit either upon him or upon the master.

After the ship struck, perfect discipline was maintained. We find that the charge of insobriety made against the chief engineer and others to be utterly unfounded.

The lifeboat arrived about 8 a.m., but owing to damage was unavailable. It was decided between the master and the coxswains of the lifeboat that the passengers should be landed (women first) by the ship's gig, it being considered dangerous to remain on board. Unfortunately the boat was capsized, and two lives were lost. We can attach no blame to anyone for the actual capsizing of the boat, but we think that an error of judgment was made in allowing the passengers to leave the ship at that time, but that it was an error made in good faith.

The Court finds that the stranding of the ship was due to the default of the master, who showed negligence and did not take sufficient precaution for the safety of the ship. The Court adjudges that his master's certificate be suspended for six months.

The chief officer's certificate is returned to him.

We find the conduct of the second officer, Kelly, to be deserving of severe censure, but we are not disposed to deal with his certificate, which is returned to him.

Upon delivering judgment, the Court decides upon the application of the master to recommend that he be granted a chief officer's certificate, pending the suspension of his master's certificate.

We have been requested by the Government to extend the scope of this inquiry to the following points:

(1) The measures taken to save life.

(2) The measures taken to render aid to the vessel when in peril before she struck.

(3) The sufficiency of port arrangements and equipment as to look-outs, life-saving appliances, the means of rendering aid to ships in distress, and

(4) The measures taken to salve the ship and cargo after the casualty.

(1) The port lifeboat and the rocket apparatus from the castle were sent to the scene of the wreck.

(2) No measures were taken. Nothing was known on shore as to the vessel being in danger before she struck. No signals were made from the ship until she was on shore.

(3) In our opinion, a proper look-out could not have been kept, and this we say without in any way blaming the look-out men. Rockets were seen by the police on duty in the town, but not by the look-out men. We consider that the hours during which the look-out men are on duty are, especially in the winter months and in bad weather, too long, and it appears that proper shelters are not provided. The best place from which to keep a look-out would be from the clock-tower, and the duties of the look-out should be confined strictly to keeping watch, and not to the trimming of lamps.

The life-saving appliances at present available are the lifeboat, and one rocket apparatus kept at the docks, and one rocket apparatus kept at the castle. The lifeboat is apparently sufficient and serviceable, and there is nothing to show that the rocket apparatus at the docks is otherwise, but that at the castle does not appear to have been properly maintained. It was found that no harness was kept there, and that no horses were available, though, had it been known, they might have been obtained from the dock authorities. There appears to have been some defect in the lines. Neither in case of lifeboat nor rocket apparatus are any practices held at any rate, they have not been held for a long time past and this we think may account for the accident to the lifeboat. We are strongly of opinion that such practices should be carried out at least once every three months, and that the gear should be periodically inspected. It is worthy of note that in the party working the apparatus on the occasion in question not a single man had, as far as the evidence goes, previously fired a rocket. We are also of opinion that should it be found that sufficient and qualified persons could be found to work it, a rocket apparatus should be stationed at the Blaauwberg Beach the difficulty of transport appears to be great even with horses. With this addition, we think the life-saving equipment for this port would be sufficient.

The evidence shows some slackness upon the part of the port authorities in communicating with ships on arrival. The port regulations should be more strictly adhered to, and if communication cannot be had by boat, signals should be used.

(4) Cargo was jettisoned; tugs went to ship's assistance, but the bad weather would not allow them to approach. One small pump was secured locally, but more powerful pumping apparatus was required, and was procured from Port Elizabeth, as it could not be obtained here. Considerable delay was caused. Salvage operations are still going on. Two anchors are laid out, which with the hawsers have been obtained from the port authorities. We would suggest that it is very necessary that powerful pumps should be kept at a port of such importance as Cape Town.

In conclusion, the Court desires to direct attention to the valuable services rendered in saving life by Mr. G. H. Stevens and his sons.