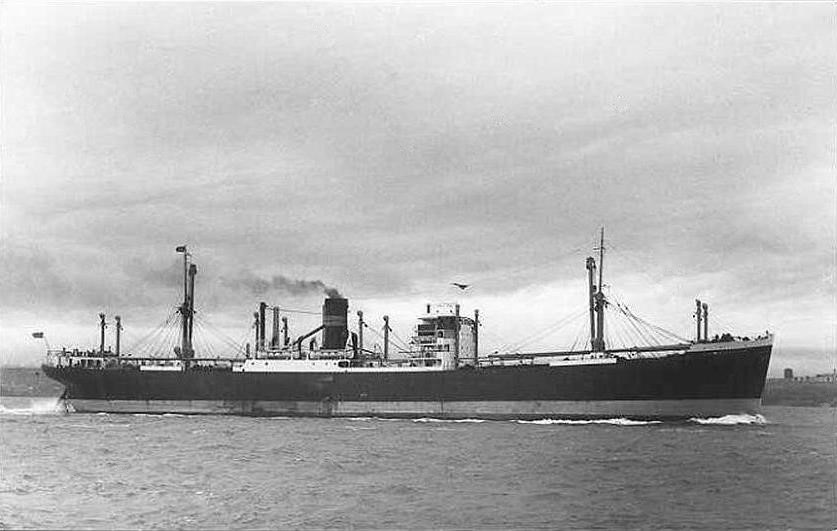 In Winston Churchill’s famous “We shall fight on the beaches“ speech, the Prime Minister hailed the evacuation of Dunkirk as a “miracle of deliverance”. But if it wasn’t for a merchant vessel from Glasgow, things might have been very different.

When Allied forces were cut off and surrounded at Dunkirk by the German army during the Battle of France, the situation was dire.

Churchill regarded it as the greatest military defeat for centuries, and was certain it would cost Britain the war, leaving the country open to invasion. Plans for evacuation were put into action, but there was a problem – surrounded on all sides, the only clear path was out to sea, back across the English channel.The evacuation (known as Operation Dynamo) began on May 26 1940 in less than ideal conditions.

Resources were stretched. With British destroyers unable to approach the beaches due to shallow waters, soldiers had to wade out, many of them waiting for hours in shoulder deep water. On that first day, 7,669 men were evacuated – a small fraction of the total number waiting to get home. A solution was needed. ‘Borrowed boats’

On May 27, the British Ministry of Shipping began asking boat builders for vessels with “shallow drafts” that could navigate the waters and treacherous sandbanks. Some of them were taken with permission, but many were requisitioned by the government with no time for the owners to be contacted. When the borrowed boats reached France, some acted as shuttles between the beaches and the destroyers, ferrying men to the warships, while others carried soldiers back to Britain.

Many of these vessels were pleasure boats and private yachts moored on the River Thames and along the south and east coasts, though some came from further afield.

One such ship was the Clan MacAlister, a cargo vessel from Glasgow, built in 1930 for Clan Line Steamers Ltd. At 7,000 tons, it was nearly twice the size of any other vessel belonging to the so-called ‘little ships of Dunkirk’, a flotilla comprised of 700 craft. Clan MacAlister’s size, and the fact that it carried cranes,made it better suited than most to transport and then unload the assault landing craft (ALCs) needed to ferry troops from the shores of Dunkirk.

But the ship’s May 29 arrival to the operation was not a smooth one – thick smoke made it extremely difficult to navigate, and the wreckage of other ships littered the harbour.It was a chaotic scene.

“We started to discharge the ALCs and had just lifted our first into the air when the destroyer Vanquisher dashed past at full speed and caused the ship to roll heavily,” said the Captain Mackie of the Clan MacAlister in A D Devine’s book, Dunkirk. 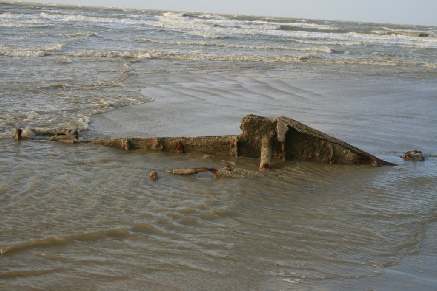 Her remains visible at low water

ALCs from Clan MacAllister at Dunkirk 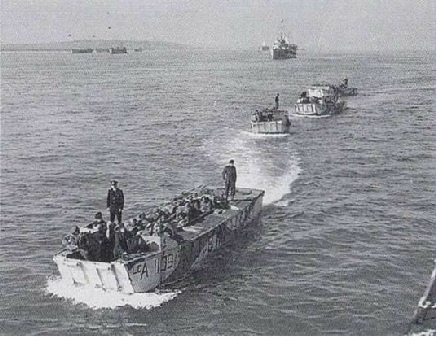 Soon after, the ship was subject to an air raid attack from the Luftwaffe, its large size making it a prime target.Eighteen people were killed, and the ship sank, but its contribution was far from over. The Clan MacAlister came to rest evenly in the shallows, with its decks above water, meaning its precious cargo of ALCs could still be put to good use. The ALCs could carry 50 men per trip, and were able to move through the shallows. As most of the flotilla was made up of smaller ships that could only take small numbers of personnel at a time, the ALCs were essential in getting troops to safety. The surviving ALCs ferried thousands of troops over the course of the evacuation, and nearly twice as many soldiers were rescued on each of the remaining days than on the first because of them.In his book,

The Evacuation from Dunkirk: Operation Dynamo, author WJR Garner dubs the landing craft brought by Clan MacAlister “the most important arrivals” of 29 May.

Changes in the French coastline mean the SS Clan MacAlister is no longer visible from the shore, despite its original above water resting place. The ship is still there on the sea floor, though, classified by the UK Hydrographic Office as a “dangerous wreck, depth unknown”.

It might not be the most fitting monument to one of World War II’s most important vessels, but the ship’s legacy will always remain.

Vital Support for The Dunkirk Evacuation - 1940