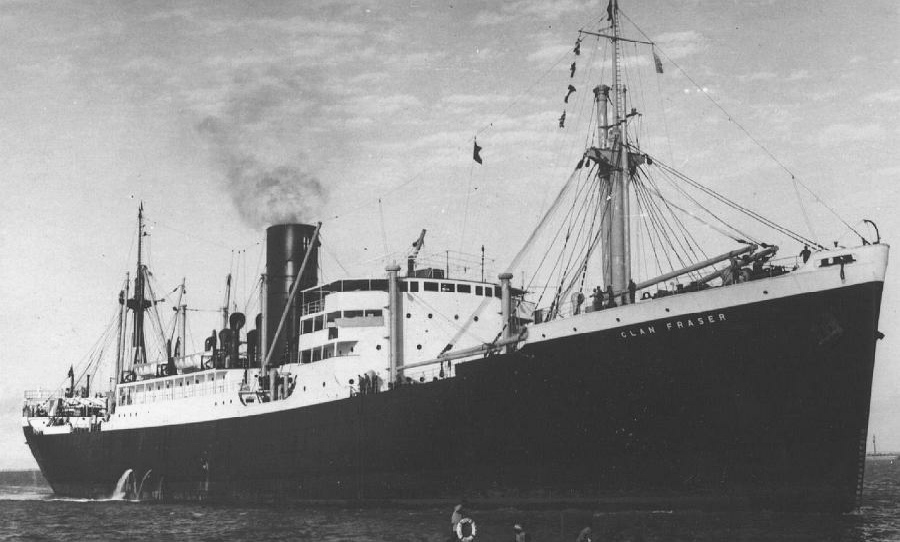 This picture was painted by Captain George Young of the Clan Line of Glasgow during his retirement.

Clan Fraser was built by Greenock Dockyard Co., Greenock and launched on 20 December 1938. She was completed in 1939 and entered service with Clan Line Steamers Ltd, of London, who homeported her in Glasgow.

She was one of the Cameron class. With the outbreak of the Second World War, she was used to support allied operations in the Mediterranean, and was one of the three merchant ships used in Operation Collar, a convoy to supply Malta and Alexandria.

An attempt by the Italians to intercept the ships led to the Battle of Cape Spartivento, after which Clan Fraser, and her sister SS Clan Forbes continued on to Malta.

Clan Fraser continued to operate in the Mediterranean until April 1941. On 6 April, the Nazis launched the invasion of Greece. 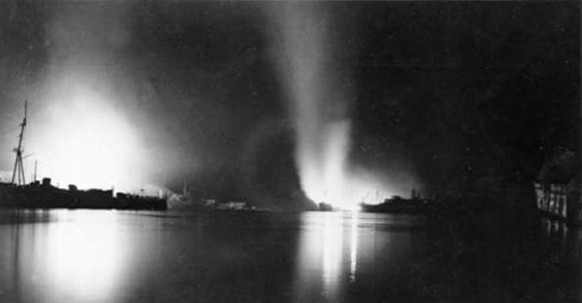 Clan Fraser burning in Piraeus harbour on the 6th April 1941, before the massive explosion

Bombed and Exploded in Piraeus - 1941

That day, German Luftwaffe bombers led by Hans-Joachim 'Hajo' Herrmann attacked shipping in Piraeus harbour. Clan Fraser was in the port at the time, delivering arms and 250 tons of TNT explosives. She was one of the ships hit, and was destroyed when the TNT in the hold exploded at 3.15 a.m.

She sank in the harbour, with six killed and nine wounded. Her master, Capt J.H. Giles was one of the survivors. The shock of the blast was felt fifteen miles away in Athens, doors were blown in; while windows were shattered in Psihiko. White hot debris detonated the ΤΝΤ in other ships moored nearby, and set other ships, and buildings ashore, on fire.

By morning the port had been severely damaged.