I have known John for many years, we first met when we sailed together on the "Athlone Castle", he as 2nd Officer and I as 3rd (the Sen.4th that was). We again met up when we both joined the "Roxburgh Castle" at Le Havre, he as Mate and I as 3rd Mate.   It was to be the beginning of a long friendship for over the following twenty or so years our paths were to follow very similar tracks. 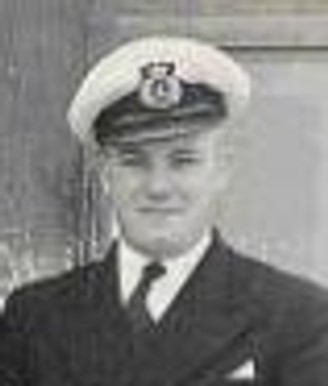 I don't think John was everyone's cup of tea, urbane with a slight stutter he could give the impression to those who did not know him of being in what we would call today 'a bit of an upper class twit'!   But John is far from that, he is very much his own man and does not suffer fools gladly.   The voyage we began together at Le Havre turned out to be a marathon (for Union-Castle), we only arrived back in Southampton six months later.   During that time John had thrown himself enthusiastically behind my marriage in Cape Town, helping to organise and 'cover' for me whilst away for three days at Hermanus.

When the "Roxburgh" arrived back in England the Company were not best pleased with us, the first to be called to London was the Master, Captain Black to 'answer' for his crime of overruling the Superintendent in Cape Town, Captain Marriot and allowing my wife Lynette to live aboard after we were married (of the six months away three were spent propping up the Eastern Mole in Table Bay harbour.   John was next, his sin being that the "Roxburgh", whilst arriving home looking very smart did not exactly follow the Company's laid down colour scheme.   He had begged and borrowed (no he didn't steal!) paint, we had completely run out, and we 'did up' the accommodation.   I am sure all you vintage U-C people will recall the yellowing white paint, scruffy brown linoleum and 'standard' furnishings in our cabins.   Well when we docked at Southampton on the Saturday morning 'Minnie' Upham was the superintendent who boarded, I had barely finished tying up aft (by now I had been promoted to 2nd Mate) when I heard the rumpus going on.   Our passage ways were a very attractive tint of light mushroom with matching carpets whilst the cabins were all of various light shades (we all chose our own colour scheme) whilst somehow such furnishings as cocktail cabinets had miraculously appeared in the cabins.   Poor Minnie, he then told Captain Black that the Company required us all to remain on the ship and do the 'Continental', the Master told him in no uncertain terms that after six months we were all, including himself packed and on our way home.   Who Minnie got to keep ship I don't know but it certainly was none of us!

John with his wife Stephanie and young son Crispin lived in the New Forest, very much in what I used to call a 'John setting', sadly this idyllic setting was not to last, John joined the South African Harbour Service being appointed to Walvis Bay, by now the family had increased with two daughters.   As with so many marriages life took its toll and the marriage ended in divorce.   Some years later further tragedy was to strike, Crispin was shot and killed whilst doing his National Service in the South African Navy.   But all this was in the future.

John and I sailed together again a few months later on "Rustenburg Castle", again John as Chief Officer ran the ship in his own unorthodox (and unauthorised) style.

We next met up when John drove to Windhoek to save us (Lynette and our three young children) the last 24 hours on the train from Durban.   In Walvis in many ways I think John was in his element, being so isolated, the only other town of any size between Walvis and the next large town, Windhoek was Swakopmund, otherwise it was just hundreds of miles of desert.   So in such surroundings slight eccentricity was accepted, in fact after a year there it was difficult not to become 'slightly different'!

In Walvis both John and I were promoted to Pilot, John had joined the Service in Walvis doing his time there as Mate and Tugmaster thus he had been there far longer than most of us.   He was transferred to Durban as Pilot where he met Joy Williams, the widow of Ken Williams who runs a successful travel business.   Now retired John and Joy live outside Durban, sadly time and distance have loosened the ties of friendship but I recall many happy times in the years our paths met.