Sister of the Kenya Castle she commenced her maiden voyage on 22nd November on the Round Africa service via the Cape and Durban.

Her passenger accommodation was remodelled in 1960 to 459.

In October 1960 she briefly replaced the Edinburgh Castle on the mail run while she underwent engine repairs.

On 6th January 1966, after less than 14 years service, she arrived at Faslane for breaking up by Shipbuilding Industries.

A combination of the increased popularity of air travel and Independence of the former African colonies reducing the transit of Europeans made her uneconomic and surplus to company requirements.

From then on the service between East Africa and Europe was maintained by the British India Line's Uganda and Kenya and much of their time was spent carrying government officials. 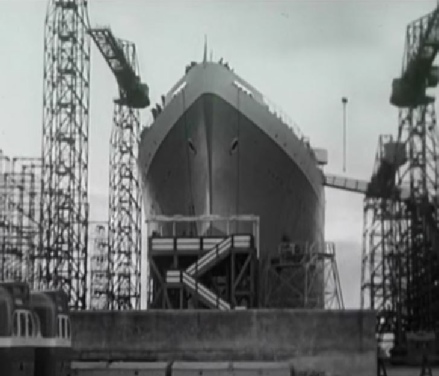 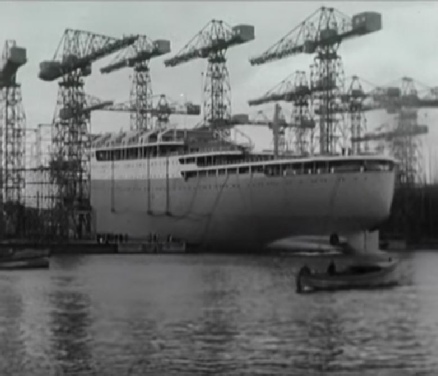 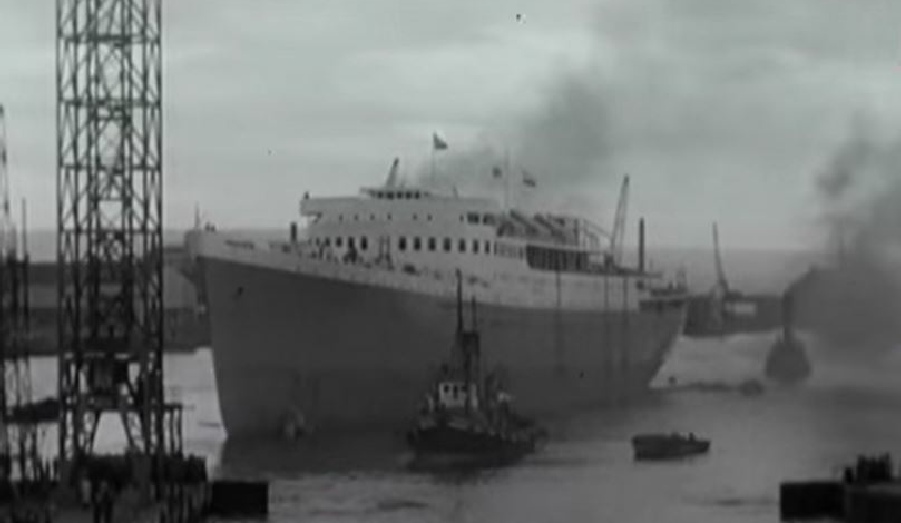 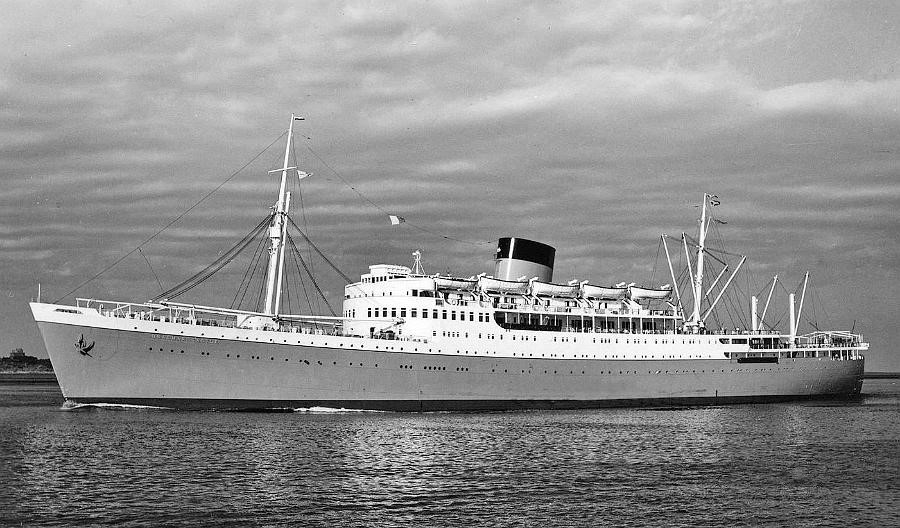 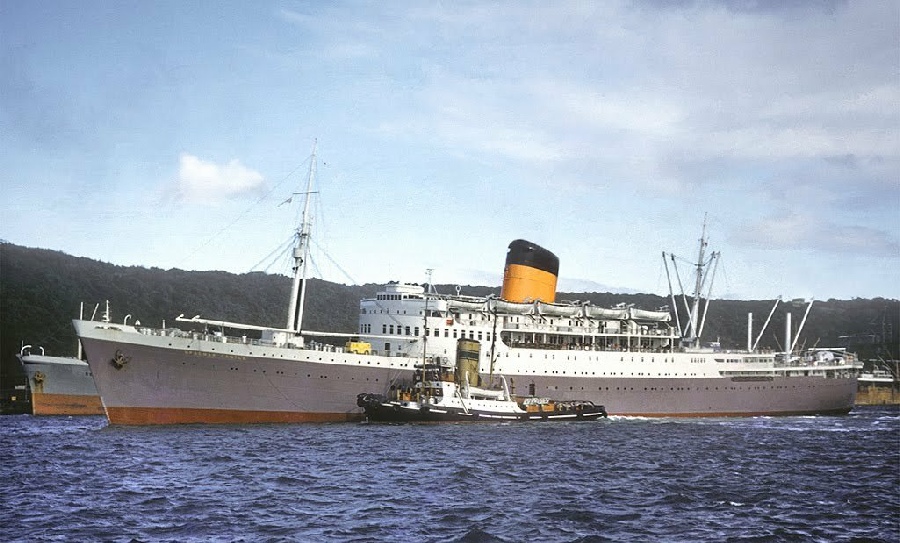 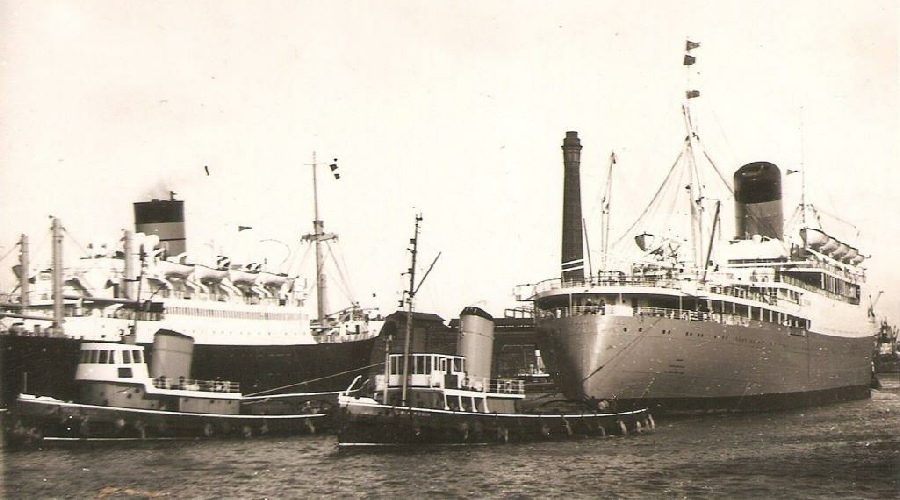 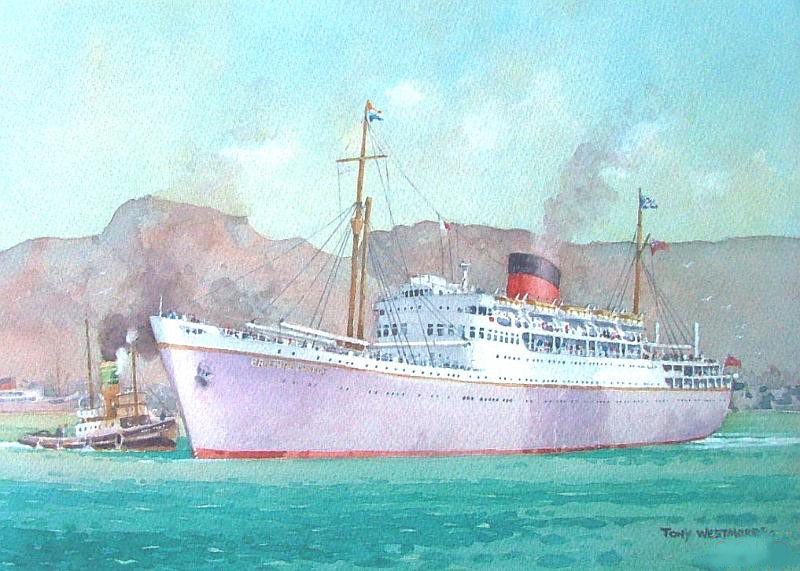 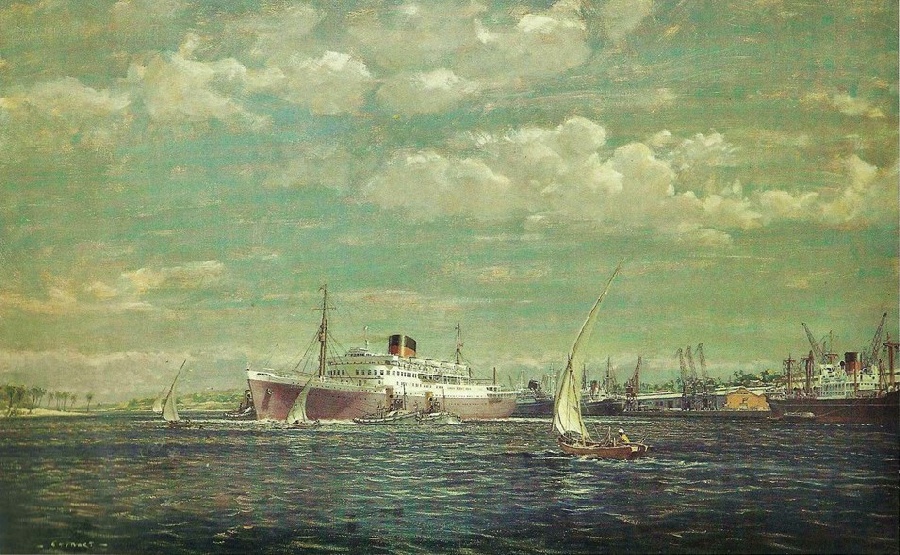 Either Tantallon or Tintagel Castle alongside 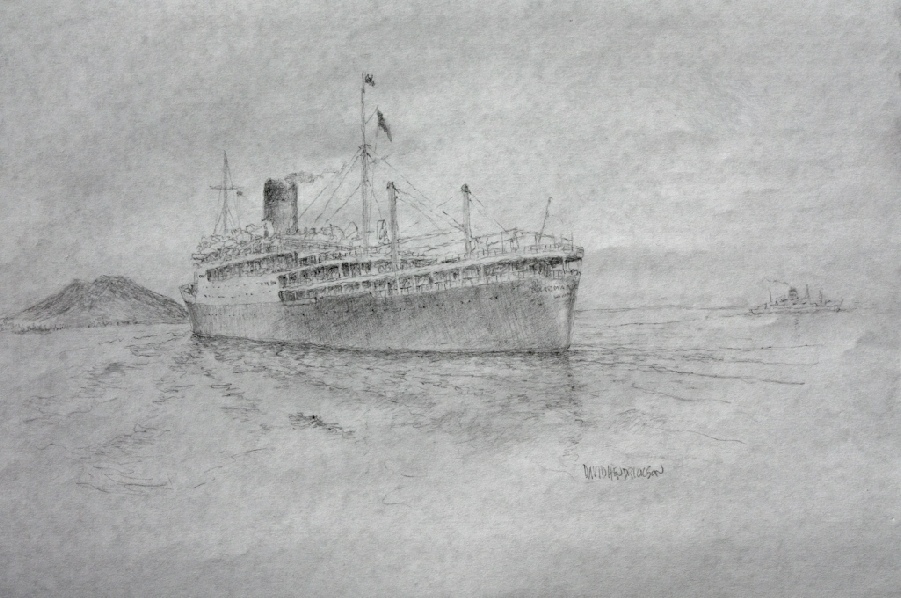 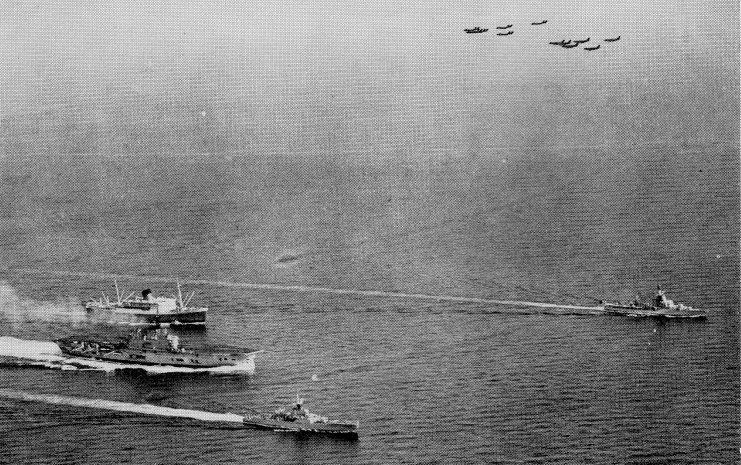 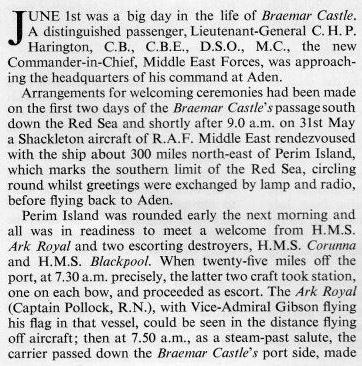 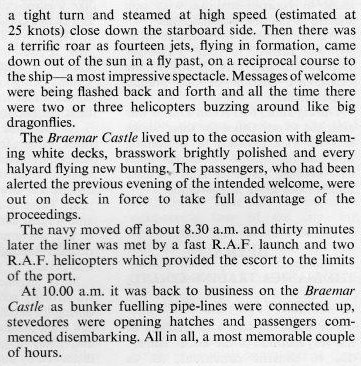 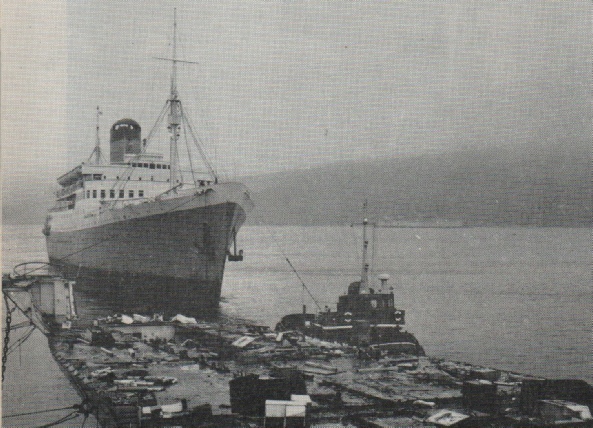 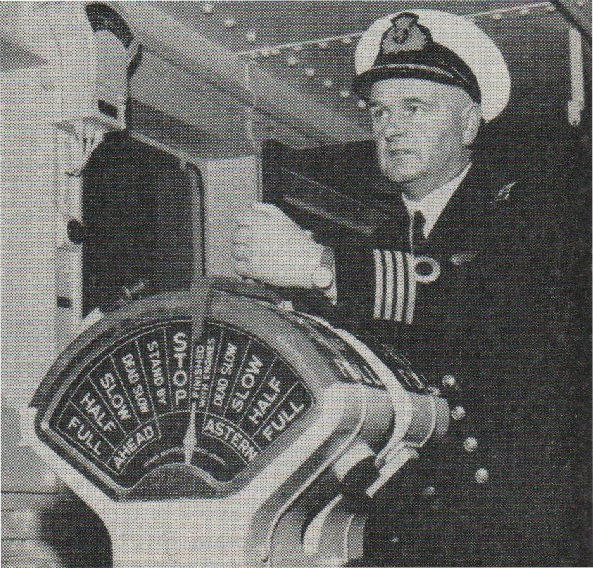 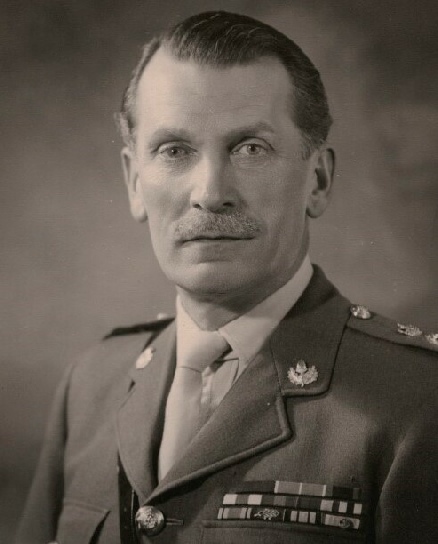 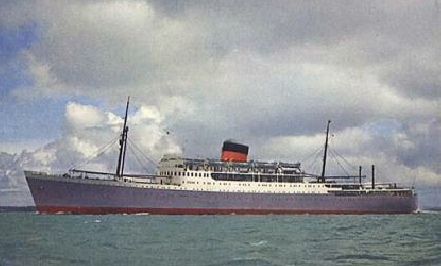 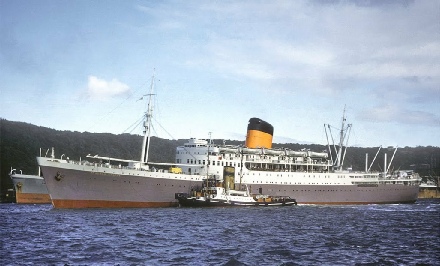 Braemar Castle is one of three Union-Castle ships I ever saw (the others were Kenya Castle and Rhodesia Castle).

In the drawing the ship is approaching Naples, Italy, on a typically hazy day.

The image of the Braemar Castle is loosely based on a photo I took of the ship docked at the Stazzione Marritima in Naples during February 1965.

The vignette is from my imagination.

Aground at Gibraltar - November/December 1959 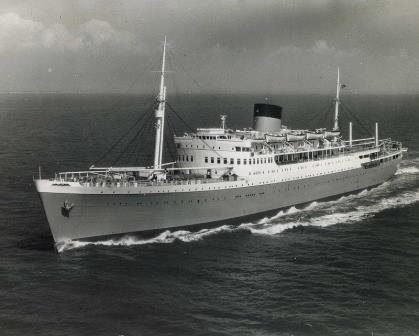 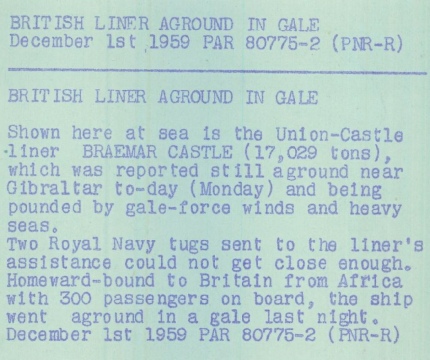 I suppose anyone that has been a seafarer for a number of years would be able to recite some incident or other.

One I recall is whilst I was on the Braemar Castle in December 1959; we were unloading cargo on to lighters just outside the harbour at Gibraltar when without warning a severe gale blew up; it literally struck the ship in a matter of just a couple of hours. The ship started to drag its anchors so the Captain made an urgent requested for tugs to come and tow the lighters clear of the ship so that we could make way. Unfortunately the tugs were already in use on other emergencies. The decision was then made to take the men off the lighters and subsequently cut the lighters free, however one lighter was blown under the stern of the ship with 4 men still on board which resulted in our being unable to use engines. With the lighter being under the stern it made the task of saving the men very difficult. By the time they were rescued the ship had touched bottom. However it was now possible to use the engines and an attempted was made to get underway but to no avail.

Next morning at low tide we were high and dry on La Linea Beach much to the surprise and interest of the inhabitants.

On the next high tide two Royal Navy tugs were able to come to our assistance and with a lot of creaking and groaning the Braemar was refloated. Fortunately after a thorough inspection by divers we were able to complete our voyage.

The incident occurred in the evening and passengers were not aware or told that we had run aground although I would suspect some must have known that something was amiss, the usual entertainment was laid on by the pursers and life onboard for the passengers continued without interruption. It wasn’t until morning that the official announcement was made. Mind you any early risers amongst the passengers would have noted that there was a distinct lack of water around the ship!

As for the lighters and their cargo, well it all ended up on the beach no doubt much to the pleasure La Lianeans.