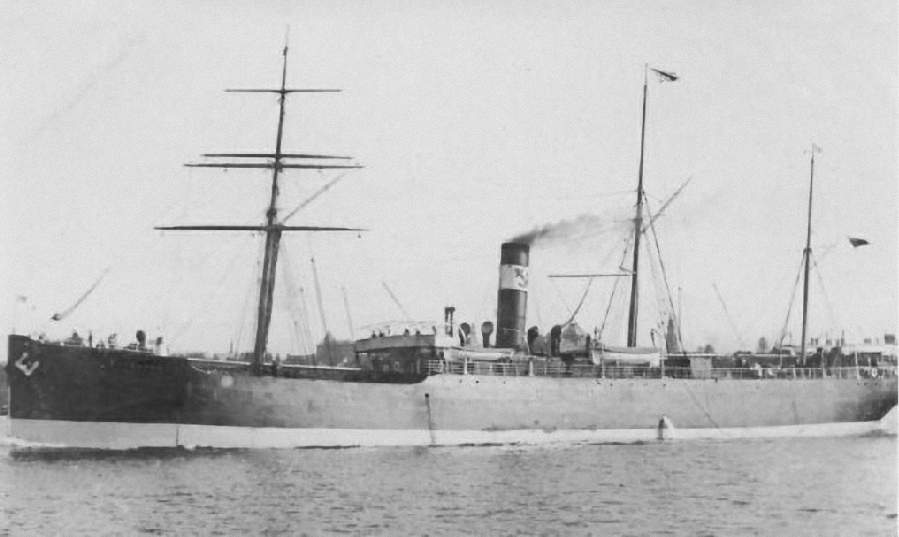 There was plenty of drama along the Irish coast in the First World War, some of which was directly played out in the harbour, whilst others eventually washed up, or in this case was towed into, the harbour.  One such story is of the SS Hermione, a saga that continued to create problems long after the savagery of war had passed

The S.S. Hermione, originally called the Yarrawonga was almost 360 feet long, 4,011 tons and was  launched in 1891 by J.L. Thompson and Sons, Sunderland. She was purchased from the Blue Anchor Line by R.P. Houston & Company, (The British & South American Steam Navigation Co) Liverpool in 1903, renamed and used for transatlantic trade between Liverpool and the Argentine carrying frozen meat.

The Hermione was requisitioned by the British Admiralty in WW1. Whilst sailing from Liverpool to Buenos Aries in April of 1917, carrying general cargo including 57 horses, she became another statistic of the war.  She was badly damaged approx. 1½ miles south of the Coningbeg rocks, off Co. Wexford, by a mine which was laid by the German submarine, UC33.  Three sailors lost their lives, but I’m not clear as yet whether it was because of the mine, or her foundering (presumably the former).

She was towed into Waterford Harbour by an escort ship, HMS Daffodil and was anchored off Ardnamult Head (Ard na Moilt) above Dunmore East.  Whilst there she sank on 14th April 1917. But this was not before in a very capable act of seamanship, Captain Spillane of the Clyde ship SS Arklow (previously SS Dunbrody of the Waterford Steamship Co) managed to come alongside in hazardous sea conditions and remove the horses.

It would appear the wreck caused immediate problems for shipping and navigation (and was probably not a great help to fishermen either). An article in the local papers of July 1917 stated that Mr Watt of the Clyde Shipping Co had complaints from the masters of their steamers about the position of the wreck and claimed it was a hazard to shipping.  The Harbour Commissioners obviously agreed, as they were in the process of placing a whistling and lighted buoy over the wreck, having secured it from the Commissioners for Irish Lights.  In November that same year ads appear in several papers looking for a salvage operator to remove the impediment to shipping. 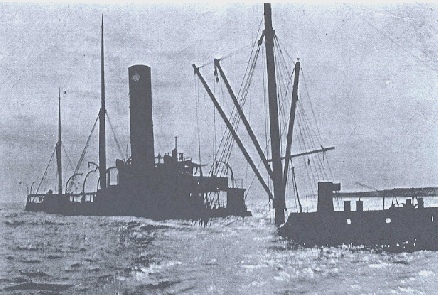 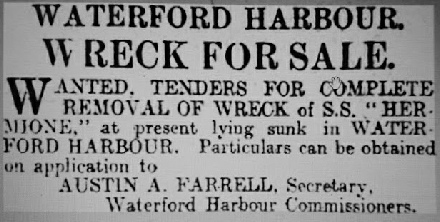