Plus about 10 on Convoys 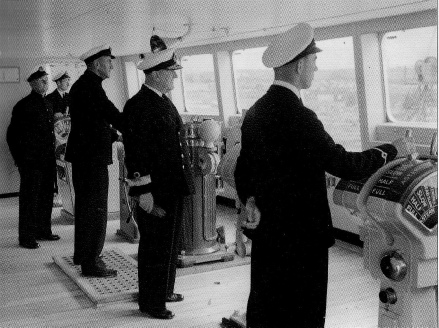 On the left when serving as Bosun aboard Pendennis Castle.

Entry in Discharge Book not actually completed  until 20/1/43 hence inaccuracies with sailing date of Convoy WS3(Fast) which left Liverpool for the Clyde and Glasgow on 28/9/40.

Left the Clyde on 7/10/40 with Oronsay and Winchester Castle. On the 8th  the convoy was spotted by a Focke Wulf Condor which flew low over the Capetown Castle (acting as the starboard wingship) and dropped 1 bomb  about 50 yards astern, no damage. Arrival in Freetown, Sierra Leone, 18/10/40 and Capetown 28/10/40. Left convoy having transferred troops and returned to UK November 1940.

Footnote…this may have been an “out and back” because at the outbreak of war the priority was to ship out the Bank of England gold reserves to South Africa. As the newest addition to the Union-Castle Line fleet RMMV Capetown Castle had strong rooms and could out run  U Boats thus offering lowest risk

Further refitting at Liverpool and then moved to the Clyde for embarkation late December on Convoy WS 5B.

Departed 4/1/41 but delayed by heavy fog and anchored off Anglesea on 10/1/41. Fears of bombings from overruns on Liverpool blitzes that week.

Departed for Bombay and then returned via the Cape .

Departed for Singapore 1/8/41 and landed 4500 troops as reinforcements.

Dry Docked for cleaning and hull painting, departing 12/8/41 with civilians for Sydney, arriving 22/8/41.

Thence to Auckland to load frozen meat sailing 5/9/41 with 152 servicemen and 100 shipwrecked mariners for UK .

Embarkation of troops for Convoy WS12Z commenced over 2 days 10/11/41,sailing on the 13th. Gale Force 8 for 5 days until passing the Azores.

The entry of the Japanese  on the German side and their successes in Singapore resulted in frequent changes to schedules and the Capetown Castle was then routed to Singapore,departing 23/12/41. Passed the Comoros Islands 28/12/41 and reached Bombay at 1000 on 6/1/42. Disembarked troops (virtually all of which would become Japanese PoWS) and sailed 17/1/42 for Colombo, Fremantle and Sydney with civilians .

Loaded frozen meat and supplies at Auckland and returned via Panama and Halifax loading Canadian and US troops.

Capacity on board had been expanded by 42% to 4236 service personnel (compared to 880 passengers in peacetime).

Many from 2nd Infantry Division reformed after Dunkirk retreat plus the Norfolk Regiment. Passage to form up on the Clyde with departure 1800 on 15/4/42.

Passed Azores on 21st arriving Freetown on the 29th . En route to Capetown passing St. Helena on 9/5/42. Reaching 30 miles SW of Cape Point the convoy encountered stray mines or a U Boat. Hecla reported a torpedo and was on fire. The remaining ships went full  speed, arriving Durban at 1800 on 17/5/42. 21,000 troops disembarked whilst the Capetown Castle and 2 other ships headed on with 19,000 troops for the Middle East and Bombay, sailing on 23/5/42.

2 Reports of U Boats in Mozambique Channel. Off Mombasa 30/5/42 then via Somali coast .On 3/6/42 Convoy splits with Egyptian and Indian sections diverging.

Returned via Panama and Halifax with US troops arriving Liverpool 17/8/42. Discharged 18/8/42. Then dry docked for 6 week overhaul.

Embarkation 25/9/42 at Liverpool for Convoy WS 23 of 12Bn Sherwood Foresters and 7 Bn Royal Leicesters ,mainly destined for India and Middle East. Headed up the convoy passing Rock Light off Mersey 1400 on 30/9/42.

The convoy was re-formed and sailed 1400 on 9/11/42, routed east of Madagascar due to Eisbar Gruppen U Boats active in the Mozambique Channel. Headed NW direct to Bombay and passed the Mauretania and Devonshire ( both heading for Capetown ) in the middle of the Indian Ocean 21/11/42.

Docked Bombay 24/11/42 to discharge stores and equipment. Sailed 29/11/42 for Capetown to re-fuel and thence to Halifax Nova Scotia.

23/2/43 embarkation of troops  at Liverpool then anchored in the Mersey on Convoy WS27.

Sailed for the Western Approaches 24/2/43 and then to a split position of St. Vincent on 2/3/43. This was disrupted by appearance of a FW Condor bomber but the main group headed south collecting surplus troops at Freetown which it left on 11/3/43.  5 miles south of Cape Agulhas on 23/3/43 arriving Capetown  26/3/43. Windsor Castle (BTLJ’s first ship)  sunk 23rd March by aircraft of KG 26 Bomber Group on Convoy KMG11 off Cape Tenes.

Following re-fuelling proceeded to Suez where troops were disembarked and replaced by Rommel’s troops for despatch to Bombay, which was reached on 26/4/43. Capetown Castle was then ordered to New York BUT via Capetown and thence to the Magellan Straits and Panama due to enhanced U Boat activity between S.America and Africa in the Atlantic Narrows.

This may also have been due to the secret loading of gold in Cape Town to repay US loans to finance the cost of armaments supplies following the Casablanca Agreement .

She was dry docked in New York at the Brooklyn Navy Yard for some weeks then loaded US troops ,arriving Liverpool 8/7/43.(Discharged 9/7/43)

At this time the concentration of U Boats in the North Atlantic was at a peak of  100 committed. The last great Battle of the Atlantic took place with Convoys SC122 ,HX229 and SC122 which left the US/Canada in early March comprising 90 ships of which 22 were sunk.

Between 10/7/43 and 30/1/44 there followed 4 round trips across the North Atlantic to New York on Trooping movements.

Further entries in the Discharge Book are……

Yet to confirm by visit to PRO but according to a verbal account this may have been the repatriation run post Yalta Conference when Russian POWs were repatriated to Black Sea ports –Dad confirmed men were disembarked and taken into warehouse complex  followed by continuous machine gun fire and probable execution.

(It was on this trip that BTLJ and Cyril Pigott possibly rubbed shoulders not realising that 25 years later their 2 offspring would be Married). 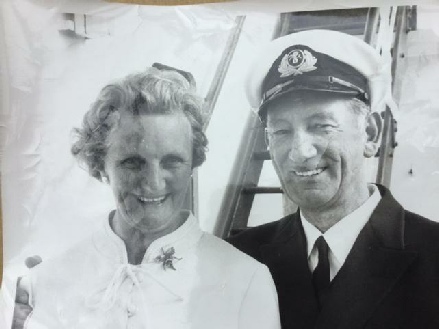 Pictured with his wife 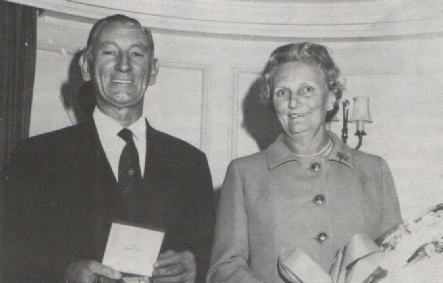