This notice was placed in the 9th December 1879 edition of the London Gazette.

Proposal to change a ships name.

"We Cayzer, Irvine, and Co., of Liverpool, hereby give notice, that in consequence of the vessel having a Greek name and as she is English owned and trading in English waters, we wish her name changed to an English one, it is our intention to apply to the Board of Trade, under section 6 of the Merchant Shipping Act 1871, in respect of our ship "AYOS ANDREAS," of Liverpool, official number 72501, of gross tonnage 228 tons, of registered tonnage 220 tons, heretofore owned by ourselves, for permission to change her name to "AMY," to be registered under the said new name at the Port of Liverpool., as owned by ourselves.

Any objections to the proposed change of name must be sent to the assistant Secretary, Marine Department, Board of Trade, within fifteen days from the appearance of this advertisement.

at The British Merchant Navy - Old Friends Plus web site. 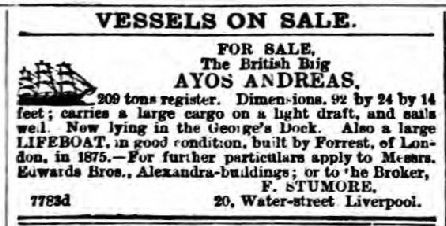 An example of a Brig 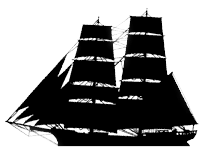