Having spent some time collating Ernie’s voyages, particularly through W.W.2, by using his “Continuous Certificate of Discharge” Seaman’s books and other documents, I had come to a standstill with just lists of ships, dates and ports. All though just lists, there are certainly names to conjure with, including Aquitania, Mauretania and Empress of Scotland. Ernie was a crew member on cruises from New York to The West Indies and The Mediterranean in the 1930’s.

I had also been trying to research Ernest’s voyages but without much success. We know that he had served in the Royal Navy 1895 - 1907 and then was mobilised 2/8/1914 in The Fleet Reserve for W.W.1; his last ship during that war was HMS Glory and so he must have been with her in Russia at the time of the Russian Revolution

Grandfather was discharged in 22/10/1918 and then as far as I know he returned to the Merchant Navy.

I believe he joined The Canadian Pacific Line but have no further information until W.W.2.

Ernest & Ernie BROOKE; All at Sea

Ernest in the title was my grandfather, born in 1878 and Ernie was my father who was born in 1911, both of them died before I had the sense to sit down with them and record their exploits at sea.

They are but two members of the extended Brooke family and the only reason I have concentrated on them is because I have various documents to base my research on. 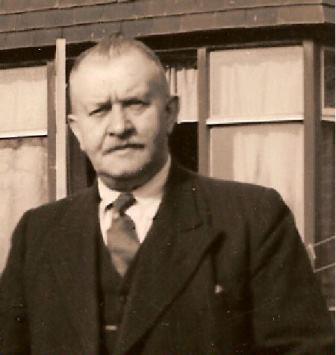 Her convoy notes show she was mainly employed on convoy duty between Liverpool and Freetown, West Africa. It would appear that on some if not all of those convoys she was employed as an armed merchant cruiser.

The Dunnottar Castle did not last too long as an armed cruiser and the Royal Navy returned her to merchant service as unsuitable for their needs but they retained the services of Ernest.

That ship was H.M.S Princess Astrid a cross channel ferry converted to carry troops and land them by landing craft; he would have been on board her when she carried Canadian troops to Dieppe for the disastrous landings there.

The following is taken from “DIEPPE AT DAWN” by R.W.Thompson.

“At ten minutes past nine o’clock of the evening 18/08/1942 the leading infantry landing ship, H.M.S. Princess Astrid cleared the gate of Portsmouth defences, leading the main body of the force.. Behind her came the Headquarters ship, the destroyer HMS Calpe followed by the destroyers Garth, Berkeley,  Albrington, and Bleasdale.”

The Princess Astrid went on to off load her landing craft 2 minutes ahead of the appointed time.

On 30/09/42, at the age of 67 The Navy released Ernest back to the Merchant Navy stating he was physically unfit for naval service because of his age; He left with a wages balance due of £13-1-4.

Just recently I discovered more information via the internet to add some “meat” to the lists, that information coming from Convoy Lists and documents known as Voyage Record Cards; These record cards were maintained on shore, the cards recorded the date of entry to a named port [both U.K and foreign] and the date of leaving that port. A most useful site is the Convoy Web http://www.convoyweb.org.uk

From that data I have been able to put the “meat” into my spreadsheet and a section of the spreadsheet appears below.

I hope it is self explanatory, the dates refer to The Athlone Castle, so the first line shows her arriving in New Zealand 16/08/1942 as an Independent [non convoy] and sailing on 28/08/1942.

Ernest and Ernie’s first convoy together was W.S. 24; this series of convoys which became known as Winston’s Specials were fast military convoys carrying troops and supplies to the Middle East, India and Far East.

W.S.24 was assigned a different route to the other W.S convoys to avoid those convoys carrying troops and supplies for the landings in North Africa, Op. Torch.

The convoy crossed the Atlantic to Bahia, Brazil before crossing back to ports in West Africa.

The Athlone then sailed on to Bombay before then returning to New York [missing U.K. ports] to start her U.S troop convoys.

During their 16 months together, the Athlone sailed in 1 convoy to carry troops to Casablanca after the North Africa landings, and then sailed in 5 troop convoys from New York to U.K for the build up prior to D Day.

I estimate the Athlone carried some 25,000 American troops to U.K. during that time and travelled about 80,000 nautical miles [ these are straight line distances, I have no way of estimating what distance “zigzagging” added to the journey]. The Union-Castle Company records the Athlone Castle having travelled nearly 500,000 miles during the war.

Ernest then joined the crew of the Salvage Chieftain on 14/10/1944 at Southampton. The only records I can find of her are within The Convoy Database where, at the tail end of the war she is referred to as HMS Salvage Chieftain.

She is described as sailing within Convoy TAM49 and as being 543 gross tonnage having been Built in 1908. The convoy sailed on 14/01/1945 from Southend arriving the next day at Antwerp.

I assume she was a convoy salvage vessel, probably operated by the salvage company Risdon Beazley out of Southampton.

The following entry is from Wikipedia;

“Risdon Beazley managed all but three of the salvage vessels that went to France for D-Day; their ships went on to clear other ports in France, Belgium and Holland. The vessels were civilian manned, usually the only military people aboard were the DEMS gunners and a salvage officer (and these were mostly RN reservists).”

Ernie stayed with the Athlone Castle until 1947 when he joined a new ship, The Edinburgh Castle.

A personal account of life on board Union-Castle Ships can be found in the book “ In The Shadow of the Hun” by PhillipW Steel. The book is a summary of a journal kept by Leslie Penny a merchant seaman during the War. He was a crew member on The Athlone Castle from 8th July 1940 to 23/08/1940 and that covered a trip to Gibraltar from Southampton and return to Liverpool. Penny recounts the air raids whilst at sea and whilst berthed in Gibraltar and Liverpool.

Ernest left The Merchant Navy I believe, on 30/07/1945 at the age of 70 years, I can only end this by recounting his award of The British Empire Medal, Civil Division for meritorious sea service in the Merchant Navy.