I was very pleased to see the notice in Family Tree Magazine about your web-site regarding the Union-Castle Line. My great-grandfather - William Houghton (1856-1934) worked for many years as a steward for the line. He was born (and died) at Winchester, Hampshire. The only ship of the line that 'family memory' records that he worked on was the 'Warwick Castle on the Capetown run.

There is a possibility that more details will come to light in the future as my father (who is 85 and a Parkinson's sufferer) I believe has more information but because of his condition it is very difficult to get anymore details at the present time.

I feel sure that he worked on the company’s other ships as he was almost continually away from home and hardly appears on the censuses at home with the rest of the family.

My grandfather - William's 4th son (of nine children) was placed with HMS Mercury (as a boy seaman) when he was about 11 years old because his step-mother died (William's 3rd wife) and their was no one to look after the family, presumably because William was aboard ship somewhere between England and South Africa.

I would love to know more about his life at sea but I've only scratched the surface. I have an old sepia photograph of William, taken on board ship in his stewards tunic, which I attach to this e-mail. (William is on the right, I do not know who is with him).

Good Luck with your most interesting web-site. 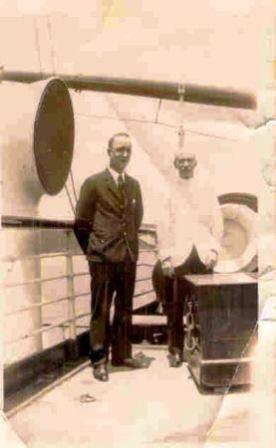