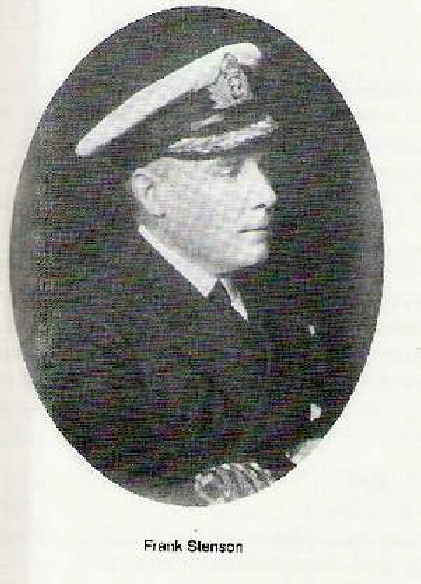 Captain of a merchant navy ship

Frank Stenson was enrolled in Belvedere College, Dublin in 1886. His family lived at 26 St Alphonsus Road in Drumcondra, Co Dublin. Frank’s younger brother, Charles Walter Stenson, enrolled in 1890, at the age of 11.

The Belvedere Archives show that Frank was only a moderate scholar. In 1889, he came 33rd in his year, out of 44 boys in his ‘Junior Grade’ Examinations. He left Belvedere in 1892.

Frank was an ambitious man who had many goals in life. Unlike his father, who had served as a Captain in the British Army, Frank Stenson took to the mercantile marines. In 1892, he joined the Training Ship ‘Conway’ on the Mersey, Liverpool. He then joined the Naval Reserve Force at Davenport, and was promoted to Lieutenant. In 1900 he joined the Clan Line Steamer Ltd, (a shipping company based in England) and it wasn’t long before he reached independent command. During one of his voyages to Java, he contracted malaria fever, but recovered.

During the First World War, he served in the Naval Reserve and held various important posts. When the war ended, he returned to the Clan Line and his services were rewarded by his appointment as Aide de Camp to King George V.

Stenson was constantly out at sea. In 1939 he was made Commodore of the Clan Line and Captain of the Clan Chisolm. Frank was a great leader who won the admiration and respect of many of his comrades.

Having served nearly fifty years at sea, Stenson expected to retire after one final year. Unfortunately that was not to be.

In October 1940 the ship which Stenson commanded was returning to England from India. While it sailed up the Atlantic Ocean, it was hit by a torpedo. It was a direct hit, and within seven minutes the ship had sunk. However, with the determination and efficiency on board, Stenson and all his crew escaped in the safety of paddleboats. But that was not the end of their troubles. They drifted for three days and three nights in cold weather. The conditions which Frank Stenson endured for those three days had a detrimental effect on his health.

He returned home to Dublin in November 1940, but his condition deteriorated and he never recovered sufficiently to go back to work.

Stenson was a devout Catholic who attended church regularly. On the morning before he died, he tried desperately to get up from his sick bed and go to Mass. But his physical weakness was so grave that this wish was never fulfilled. He died at home in December 1940. Although his obituary in the 1940 Belvederian states that he was 55 when he died, this does not tally with the fact that he enrolled in Belvedere in 1887. He was, therefore, probably 65 at the time of his death.