Virtually a sister of the Taymouth Castle she was delivered as the Adjutant for Seatter, White & Co. of Leith.

She was acquired by the Castle Mail Packet Co. for use as an 'extra' steamer in 1879. In 1891 she was sold to Sir Christopher Furness who then sold her on to Pickford & Black without a change of name.

She was sold to Dandamia Khandwani & Co. of Bombay and by 1925 was owned by Maneckchand Jivraj & Co. who scrapped her locally.

The South African Library, Victoria Street, Cape Town the following article is taken from the Cape Times, of 16 December 1881

The Duart Castle, commanded by Captain Barnes, which has come out as an extra boat of the Colonial Mail line, arrived in Table Bay yesterday, after passage lengthened by to terrific gales between England and Madeira.  On November the 17th the warning came from America to England to expect a great gale on the 21st, but to the barometer on the 20th showed no indication of it, and during the appalling storm experienced by the Duart Castle the glass was never below 30.  The ship's report and the extract from the log will briefly describe the gale, but no written account will convey an impression of the most fearful whether ever witnessed by the commander of the Duart Castle.  The wind freshened after leaving Dartmouth, and for four days and nights Captain Barnes never left the bridge.  On Sunday night the gale had so increased the engines had to be slowed, and by about one o'clock, it's been found that one of the aunt covers of coal bunkers had been washed away, and the seas were rushing down into the bunker, a plucky and determined effort was made to close the bunker whole.  Whilst this was being attempted, a sea came on board, carried away some of the small houses forward, washed away the men working at the bunker hole, and did damage particularized in the log.  The men were washed aft, and for some time the chief officer could not be seen, but he was eventually found amongst the wreckage behind the aft deck house.  He was fatally injured but when picked up his last words were, go at it again, men.  The injuries he sustained and his death are described in the official report given below.

Mr Wallace was a well-known and very highly respected officer of the fleet, and having been for a long period and officer of the Melrose, he had a large circle of friends in South Africa.  The carpenter, who was almost as much injured, was landed with great care at Madeira, and a slender hope of his recovery is held out.  The damage sustained by the Duart Castle in this gale is another of the proofs constantly brought before us that however wise and scientific the precautions, no absolute safety can be assured against the furore of the sea.  But Duart Castle probably owes her’ living’ through this gale to the fact that she is without bulwarks, as are the steamers which are built to brave the furore of the North Atlantic storms.  But those who built her never dreamt that the massive iron lids of the coal bunkers fitted exactly into their circles, so exactly that they are watertight, would be hammered out by the immense weight of the falling water and washed away, and how the deck houses remain standing when the solid wheels of the after steering gear were carried away is one of the mysteries of the sea incapable of human solution.  These wheels, which are of teak, were literally torn away, and simply the circular boxes which held the spokes are left standing.  In what way the sea came on board which caused this destruction no one on board can explain, and Captain Barnes must have had a most anxious time when he saw this wreckage dashing about, and new that it might at any time block the rudder chains.  If that had occurred, the steamer would have been unmanageable, and, falling into the trough of the sea, nothing could have saved her.  The men throughout behaved splendidly.   Notwithstanding the appalling accident to the chief officer and a carpenter, they returned to the work of closing the bunker hole, and were successful in doing so.  But for the carrying away of the forward bathroom and the destruction of the wheels aft, and some other little damage, the Duart Castle is none the worse for the great buffeting she received.  The height of the waves may become comprehended from the fact that Captain Barnes, who was on the upper bridge was knocked down several times, and the sea poured down into the engine room from the iron ventilators, which are about 12 feet above the deck.

The following is the ship's report: –

left Dartmouth noon November 19, with a strong N. W. wind, increasing on November 20 at 8 PM to a strong gale and very high sea, slowed engines November 21, 1 AM.  Heavy gale with furious squalls and tremendous sea; shipped a heavy sea, washed away bath-room, meat-safe, lifting boats out of the tackles and breaking the spars, carrying away both after wheels, gratings, wheel-box, and all attached.  The chief officer was washed along the deck, breaking his right arm and right thigh, and receiving internal injuries from which he died 30 min after being taken below.  The carpenter had his thigh and ribs broken, and was landed at Madeira.

the following is the extract from the logbook: – Lat. 46° N., Long. 7° 30” W., 2am., 21st November.  Blowing a heavy gale from S.W. With tremendous sea.  Mr Wallace, first officer, with the other officers and some hands was securing a bunker hole, the eye and top of which had been washed off, and the seas pouring down, when a very heavy sea made a clean breach over the ship, carrying a way forward latrines, buckets and racks, lifting three or four boats out of the lashings and breaking the spars, officers bathroom and safe, also after wheels, gratings, wheel boxes and all here attached, etc, and tearing part of the mast cover away.  Mr Wallace 1st. officer, was picked up from the from under the main reading and taken below.  The doctor, on examination, found his right thigh broken, right arm broken in three places, several conclusions over the left eye, and other injuries, from which he died about 3 a.m., or 45 minutes after being taken below.  The carpenter, Mr Brown, was also injured breaking his hip bone, two ribs, and other injuries. – November 22, lat. 44° 30 8N., long. 9° 3W.; The mortal remains of Alex Wallace, late 1st. officer, were committed to the deep in the presence of all hands available. 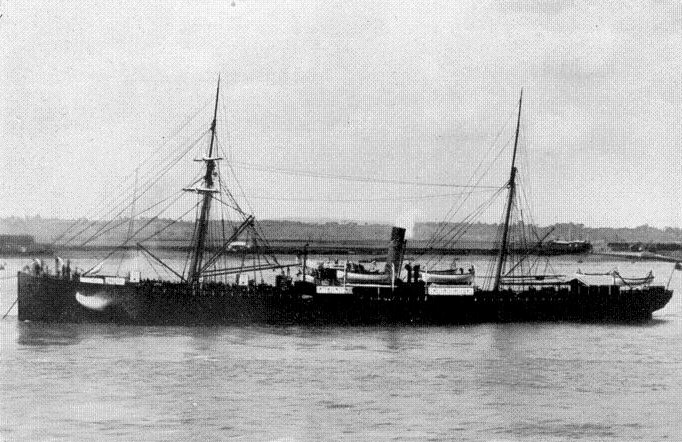