William Speakman-Pitt, VC (born 21 September 1927) is an English recipient of the Victoria Cross, the highest and most prestigious award for gallantry in the face of the enemy that can be awarded to British and Commonwealth forces. He was the first man to receive a VC from Queen Elizabeth II.

He was 24 years old, and a private in what was then The Black Watch (Royal Highland Regiment), British Army, attached to the 1st Battalion, King's Own Scottish Borderers during the Korean War when the following deed took place at United Hill, for which he was awarded the VC. Although his award was made by King George VI, Speakman was the first VC invested by Queen Elizabeth II.

On 4 November 1951 in Korea, when the section holding the left shoulder of the company's position had been seriously depleted by casualties and was being over-run by the enemy, Private Speakman, on his own initiative, collected six men and a pile of grenades and led a series of charges. He broke up several enemy attacks, causing heavy casualties and in spite of being wounded in the leg continued to lead charge after charge. He kept the enemy at bay long enough to enable his company to withdraw safely.

Press reports of the time reported that Private Speakman began throwing bottles at the enemy after running out of grenades.The bottles were in fact beer bottles sent to the line for platoon consumption (40 men-approx 4 per man). By the time the platoon were attacked, the bottles were empty, thus constituting suitable weaponry.

He later achieved the rank of sergeant. He later served in Malaya (with the SAS) Borneo and Radfan.

His Victoria Cross is displayed in the National War Museum of Scotland, Edinburgh Castle, Scotland.

During the 'Gunpowder Plot' battle of Sunday 4th November, Private William Speakman, with the aid of six men from his battalion, organized an attack that held the Chinese attack off. Testimonies from witnesses said Private Speakman was fighting on the ridge top, tossing grenades at the Chinese, as they climbed towards the KOSB's positions. When he ran out of grenades, he ran down to the ration pit, grabbed a new supply of grenades and returned to the ridgeline to resume his assault on the Chinese. When a machine gun was knocked out and in danger of being overrun by the Chinese, Speakman organized his men to defend the weapon and prevent the Chinese turning it on the KOSB. His action gave his company time to withdraw to safety.

Altrincham born Bill Speakman was a tall man of 6 feet 6 inches who began a military career as a drummer boy in the local Army Cadet Corps. He later joined the King's Own Scottish Borderers, and went on to be awarded the Victoria Cross for Gallantry in 1951 during the Korean War. The award was given as a result of his repeated charges against a heavily defended enemy hill position without regard for his personal safety, and despite being wounded and out of ammunition, pelted the enemy positions with tin cans, stones and beer bottles. Speakman was the first to receive the VC from Queen Elizabeth II, and was dubbed the "Beer Bottle VC" by the press.

A shy and retiring man, he returned from the war to Altrincham to be greeted by throngs of well-wishers and civic dignitaries. After demobilisation, Speakman grew unhappy with civilian life, and later after remarrying he went to South Africa in 1972 where he worked as a Security Officer in Durban.

Bill became a Chelsea Pensioner on the 1st November 1993 and was among the Pensioners that marched across the Royal Albert Hall arena at the Festival of Remembrance ceremony on 13th November 1993. He became an out pensioner the following year and returned to South Africa. He returned to take part in the Queen's Golden Jubilee Parade in London on the 4th of June 2002. 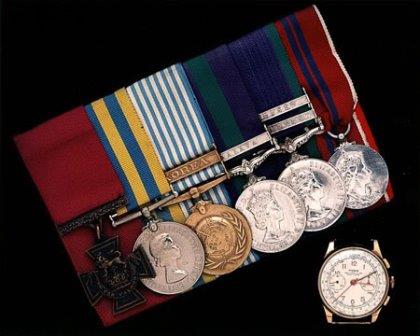 I first met Bill in 1971 when I was 2nd Officer on Pendennis Castle and he was Master at Arms.  He exemplified the expression “walk softly and carry a big stick”.

When it was required to go down to the working alley to sort out a problem Bill was always first choice to take with you.

He would often visit the bridge at night for a chat and a cuppa. I cannot recall the subjects of the conversations but I do remember that his exploits in Korea were not among them.

Years later, probably around 1978, my then wife and I were visiting relations in Durban. I happened to mention one evening my knowledge of Bill and what he did to earn the VC. The very next day we were in OK Bazaars in Durban and as we stood waiting at the checkout a big hand landed on my shoulder and a familiar voice said “Is that Mr Isaac?” A remarkable coincidence. Bill was now working as store security.