The 1911 census has my great-uncle, Thomas William Simpkin, working as a printer on the RMS Kenilworth Castle. On the day of the census he was visiting his aunt and family  in Chiswick with his mother He was born 22 Aug 1879 in Mile End, London and died 9 May 1925 in Duluth, Minnesota, having emigrated to Canada in 1912.

Any use to you?

Tom was born at 8, Venour Road, Mile End, London on 22 August 1879 to Thomas Simpkin and Elizabeth Grace Simpkin (nee Grieve), their second child. Sadly his father died in 1883 when Tom was only four. His mother was left with four children under six and since she had to work to support the family the three eldest were placed in orphanages and the youngest was fostered. Tom went into Dr. Stephenson's Children's Home and Orphanage, Bonner Road, Victoria Park, London E. He trained as a compositor as his father and brother were also printers. In 1910 he visited one of his sisters in South Africa (am I correct in thinking the "Kenilworth Castle" regularly sailed to South Africa?) and in 1912 he emigrated to Canada where he married a neighbour from back in England. They had three children but sadly he developed liver or stomach cancer and he spent most of the rest of his life in hospital where he died on May 9 1925. The family became destitute so were returned to England where they were split up.

I am attaching a couple of photographs of Tom. I still have his sea-chest!

I knew he had been to sea as a printer so it was great to find the actual ship on which he worked. 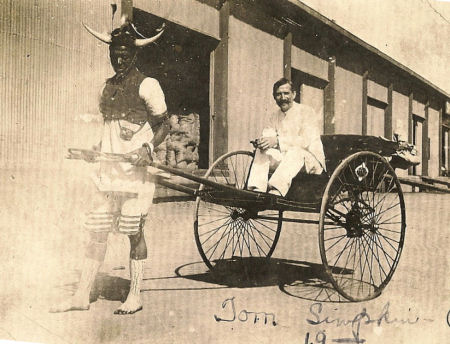 Tom Simpkin, almost certainly in Durban, having taken a rickshaw from town to the "Kenilworth Castle" at A berth.

Was researching a Mount Temple crewman called Thomas Simpkin, born in London, and who deserted in Canada in 1912.

Hey presto, up comes a contribution to your staff register from a Mrs Florian Barker who says her Thomas Simpkin, born in London (both in the East End) “emigrated” to Canada in 1912 !

Could you please provide me with her email address? I am sure she would be glad to know what I have to contribute.

Best wishes and congratulations on your good works,

Regret that I do not have Florian Barker’s email address but if she reads this perhaps she would make contact at senanmol@gmail.com