Sister of the Edinburgh Castle she began service as a mail steamer on the Indian run; her maiden voyage being from Southampton to Calcutta which was completed in a record time. In May 1873 she broke the record for the run from Dartmouth to Cape Town when the voyage was completed in 23 days.

On 19th October 1876 she was wrecked on Dassen Island at the entrance to Cape Town Bay without any loss of life.

The ship broke up in the heavy swell within a week and the Stettin was transferred from the North Sea service to replace her.

The stream of events which lately has flowed somewhat sluggishly, was roused into an unusual state of activity and excitement late on Thursday night by the unexpected and startling intelligence that the mail steamer Windsor Castle, Capt, Hewat, had been wrecked on Dassen Island.   She had been anxiously expected ever since Monday, and was several days beyond her usual time but no one for a moment apprehended that the good ship had met with such an untimely fate, as has unhappily been the case.

The steamer Nubian was sighted early in the morning, but it is doubtful whether she saw the Windsor Castle, and if she did, there was nothing in her appearance to indicate that there was anything wrong.

Pursuing our enquiries regarding the unfortunate disaster, we gathered that the voyage throughout had been far from a pleasant, or agreeable one - heavy fogs in the Channel, head winds almost all the rest of the way, and gales in the trades, indeed , the morning on which the steamer struck was the first one that had been enjoyed for a fortnight previous.   All this tended to prolong the passage, and the night before the wreck some wag - with grim irony - stuck up a notice that as the provisions were running short, passengers were requested to breakfast on shore the next morning!   This they did, but in a manner little expected.   On Wednesday all were congratulating themselves that they would land next day, and the passengers were in the best of spirits.   The course was set at midnight in the usual manner, previous to which land appears to have been sighted in the distance.   At the time the vessel struck, the captain we learn was below, and the second officer, Mr. Grey, in charge on the bridge.   The courses were not deviated from; but, somehow or other, between two and three o'clock in the morning, the steamer struck on one of the reefs which stretch out on all sides from Dassen Island.   The passengers, were of course, all in their berths asleep at the time, but the grating sound soon awoke them, although there does not appear to have been any great concussion.   Some of the passengers, we are informed, thought it was the noise of the anchor being dropped in Table Bay.   There was a rush on deck, but when it was seen that land was close by, and the sea quite calm, fears were allayed and the greatest order and equanimity of mind prevailed.   One gentleman who turned in about two o'clock informed us that at the time the weather was beautifully clear and fine.   He had only been in his bunk about half an hour when he heard the vessel strike, and he immediately went above, the first thing he did being to cut adrift the hencoops and other light gear, in order that there might be a chance of something to lay hold of if the worst came to the worst.   Some of the ladies were naturally very much alarmed, but there was nothing like a panic, and all the passengers and crew, together with the mail bags, between seventy and eighty in number, were safely landed under the superintendence of Captain Hewat and his officers, on the island.   Two of the passengers, as already described, were dispatched to Cape Town for assistance.   All day long communication was kept up between the shore and the steamer, and, with some few exceptions, all the passengers baggage was saved.   Had not the night been calm, in all probability, not a soul on board would have been left to tell the tale.   The wind blows at times with terrific violence from the north-west, and the distance of the vessel from the shore, added to the fact that she is beset with breakers on every hand, leads to the inference that life could only be saved with the greatest difficulty, if at all, as even the islanders were unaware of the wreck until day-light, although guns were fired and rockets sent up and other signals of distress given.   In spit therefore, of the grievous nature of the calamity, the passengers and crew must draw some comfort and consolation from the fact that things might have been far worse, had it not been for an almost miraculous interposition of Providence.   It is scarcely likely that the cargo can be saved, and in all probability the vessel will break up as soon as a heavy sea sets in from the north-west.   She is completely fixed on the reef and some six or seven feet of rock have gone through the bottom.   The engine fires were extinguished within ten minutes of her striking, and the steamer lies fast embedded in her present position, half full of water, all chance of ever getting her off being hopeless.

As to the actual cause of the disaster we can of course say nothing, pending the official enquiry - nor would it be proper to give even an inkling of the many rumours which are current.   Of its  magnitude there can be no doubt, and it seemed sad indeed to see such a noble and handsome vessel in so unfortunate predicament.

Immediately on the arrival of the Florence, Captain Hewat called all the passengers together, telling them that those who wished could proceed at once to Cape Town, while the others could wait until the following day.   A number of passengers were not long in making up their minds to quit their island home as speedily as possible, but many seemed to have become enamoured of the Robinson Crusoe kind of existence, and determined to stay by their baggage until both could be removed together.   There were in all about 160 passengers on board, of which a list is given below.    A very fine horse, a bull, and some rams were also brought out; and it was hoped these would be saved.   The Windsor Castle is so well and favourably known in the Cape, that any particulars regarding her would be superfluous, but we may add that she was a comparatively new vessel, having only been built in 1872.

The Florence left the island yesterday about one o'clock with a number of passengers, arriving in Table Bay after a rather rough trip, at six o'clock.   Owing to the strong south-easter it was impossible for the steamer to go into dock, but the majority of passengers landed in cargo boats.   We understand that she goes down today to bring up those remaining, and other provision will also be made for removing the passengers baggage.   Great credit is due, not only to the agents, but also to Captain Fulton and his officers, for the prompt and ready assistance rendered, and the admirable trip made by the Florence in the face of no inconsiderable difficulties.

Note:  As a point of interest amongst the 160 odd passengers were two of historical interest and importance.   Sir Theophilus Shepstone was returning to South Africa with the earl of Carnarvon, the Secretary for the Colonies, commission should it seem desirable, to annex the Transvaal.   Sir Theophilus, the son of a Somerset vicar had previously been instrumental in the founding of the colony of Natal for Britain.

The second passenger of note, one of the two who rode to Cape Town to summon help, was to make a similar ride but in tragic circumstances three years later. Lieutenant Melvill of the 24th Regiment was awarded a posthumous Victoria Cross for saving the Colours after the rout of the British forces at the battle of Isandhlwana.

I have copied the article as printed, précis of this and the later enquiry accounts lose all the immediacy and drama of the incident, this despite 'our special' correspondent never failing to use three words where one would have sufficed!

There are conflicts between this 'hot from the press' account in the Cape Argus and those later reports from the official enquiry.   As these are very well covered in the major books on the Union-Castle history I leave you to read these yourself.

The reporter was unlikely to have got his information from the ship's officers, more likely from passengers and perhaps crew.   Evidence given at the court of enquiry differed in a number of significant points.   There were two more important considerations not mentioned..

The first can be seen in the rather odd structure on the poop, (painted brown).   At the time of the "Windsor Castle" severe problems were experienced by mariners by an error of the magnetic compass, deviation, caused by the use of iron in building ships.   Matthew Flinders, after whom the Flinders Bar was named, an officer in the Royal Navy, made important discoveries into the causes of deviation of the magnetic compass caused by iron in the structure.   But it was William Thompson, later Lord Kelvin, whose research led, in 1880 to the complete redesign of the compass binnacle, incorporating the Flinders Bar and correction magnets of Flinders with 'Kelvin's Balls' - two iron spheres either side of the compass.

Now to return to this curious structure on the poop - it held the magnetic compass!   It was thought that if the compass were to be housed as far from the decks and masts as possible the magnetic errors would be overcome.    Here I suggest is one possible contributing cause of the loss.   An unknown error of the compass.

The second contributory factor is one well known by today's navigators but not fully appreciated at the time.   It would not be until 1899 and the loss of the "Thermopylae" on Green Point would this then little understood phenomena be taken into account.

The Cape is well known for the atmospheric conditions known as double refraction.   I can well recall myself seeing those vital lights approaching Cape Town at night at incredible distances, double that of those given on the charts.   Navigators were warned not to use these lights for fixing the ship's position until the light was 'properly' raised as the bearings were unreliable and a navigator could be easily lulled into a false sense of safety.   Obviously Captain Hewat did not intentionally set a dangerous course, equally obvious is the fact that the second officer, Mr Grey was confident of his position.   That being the case, the conclusion is equally clear, the ship at midnight was not where they thought it was and there is the added possibility that the error of the magnetic compass was a factor in the stranding.

It has always been the case that, in marine accidents, unlike in almost every other profession, somebody MUST be found to blame, and suffer the consequences.

The Wreck of Windsor Castle on Dassen Island - 1876 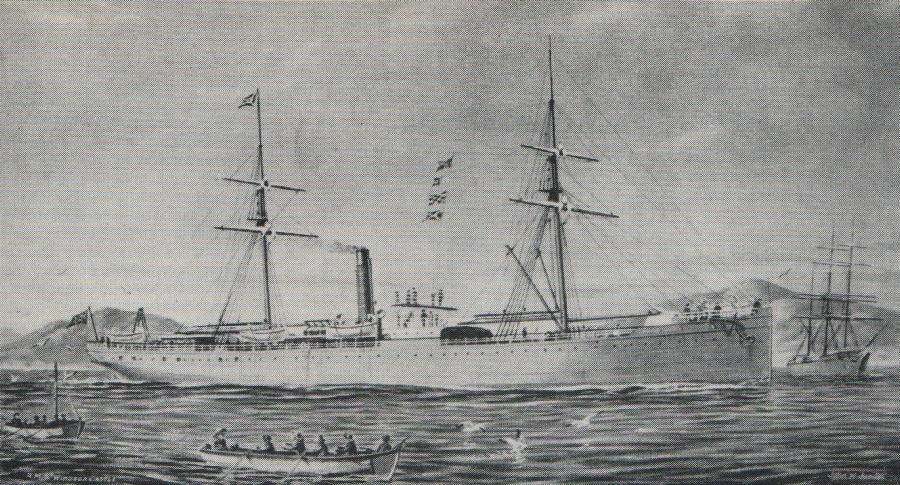 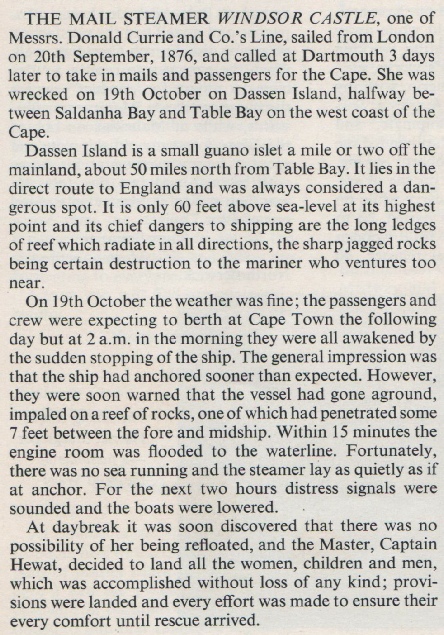 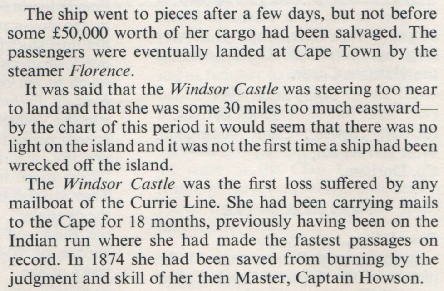