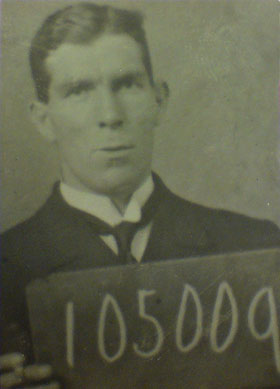 At last I have compiled a brief history of my grandfather that I hope you will be able to include in your web site, shipmates.

I hope it is in the right format for you, please would you let me know if it is not.

I also hope that my technical terms are correct, I am happy to make corrections.

I am doing further research into the gaps that will take some time, I wonder if it would be possible to update my entry at a later date?

Congratulations on the smart re-design of the site.

This is the story of my Grandfather who until recently I knew very little about. It is not a particularly remarkable story but it portrays an interesting insight into the daily life of an engineer working for the Union Castle Line in Southampton in the early twentieth century.

Until my recent research into my Grandfather’s life I knew very little about him as he died at the age of 42 when my Father was just 12 years old. Now, I can understand that my Father would hardly have known him as he was at sea for most of his life.

Although my grandfather’s life was short, he worked hard and became a 1st Class Engineer, Steering Gear.

I have been fortunate to have found most of his history at the Southampton Archives and the National Maritime Museum.

He served a 5-year apprenticeship with a company called Donkin and Company Ltd, starting in 1898. They specialised in the manufacture of steering gear for steam ships.

After this he was away at sea for 2 years for periods of 1 to 4 months at a time on the general cargo ship SS Joseph Davis based in Sunderland. This was followed by another 2-year service on the Lavinia Westoll, also based in Sunderland, which traded around the Black Sea and the Mediterranean.

It was during this period that he passed his examinations for promotion to First Class Engineer.

Jobs were scarce at this time in the north and he was fortunate to find employment with the Union-Castle Line in Southampton.

He made the long journey south along with others seeking work and settled in what was then called Itchen and now known as Woolston.

This would have been around 1907 and it is unfortunate that most of the records for this time were destroyed in the 1960’s. Therefore there is a gap of information that will need further research to determine which Union-Castle ships were in his service history during this period.

However, I do know that he married my Grandmother in 1911 in Bishopstoke, near Eastleigh. They were living in Bishops Road, formally known as High Street, Itchen.

He would be away for 2 to 3 months at a time travelling down to Africa in tough conditions. Although the worst conditions must have been for the stokers shovelling coal into the steam engines, it would have been very unpleasant in the engine room in the African heat.

Around 1914 and the outbreak of World War 1 all merchant seamen were issued with identity certificates called CR10s. These CR10s included a photograph and this is the photograph of my Grandfather.