Additional information: Husband of E. A. Marshall, of Southend-on-Sea, Essex.

I wonder if you can help me?

My grandfather, James Marshall, was the chief cook on board Richmond Castle when it was torpedoed.  Sadly, he did not survive.  I'm not sure if he went down with the ship or managed to board a raft and later died.

I am eager to trace any of his surviving shipmates as there are so many things my family would like to know.  Being away at sea for several years at a time none of his children got the chance to really know him.

Is there any way I could be put in contact with any survivors from the ship please?

Thanks for replying to my email, and thank you so much for forwarding my email to John Cutcliffe. I've attached a document (copy of log of alien crew members sailing to USA August 1941).  My grandfather, James Marshall, is number 56 on the list.  This was sent to me by Stuart Ritchie, who's wife's grandfather was last on the list.  I've also attached a copy of the email message sent to me by Stuart and included a link to a website which I think may be of interest to you.

I'm afraid I can't tell you much about my grandfather.  He was West Indian - from Barbados (Christchurch area, we believe) - black skinned.  He was married to an English girl, Ethel (my grandmother - nicknamed by him as 'Peaches'), and they had six children.  According to my mum, aunts and uncle (Jame's children) he was very tall - well over six foot.  However, looking at the attached document it states he was exactly six foot.

My grandfather left his parents and family in Barbados while quite young and I don't think he kept in contact with them, although there is a possibility that his brother came to England to visit him in the 1920s.  It seems that his parents wanted him to study to become a doctor but it was not what he wanted.  There are two versions (according to which aunt or uncle I speak to) of what happened after he left the West Indies.  He either ran away to sea or he travelled to England and worked on building sites and then later joined the Merchant Navy.  My grandmother died in 1975 - she would have been the only family member who could have told us for sure.

I'm not sure how many ships he served on - the attached document shows that he had served 30 years at sea in 1941 - but I don't know if he served on any apart from Richmond Castle.

He was 54 when the ship went down in August 1942.  At the time of his death, his wife and children were living in Southend-on-Sea, Essex.  Previously they had lived in the London area.

Hopefully if John Cutcliffe ever entered into conversation with James, some of the above details may ring a bell.

There are only two surviving photos of him - neither in my possession.  My uncle has one, which he guards jealously and the other is with a cousin in Australia.  I will do my best to persuade my uncle to let me make a copy of the photo and will email it to you.

Once again, thank you for taking the time to respond to my request.  I look forward to hearing from you and John Cutcliffe. 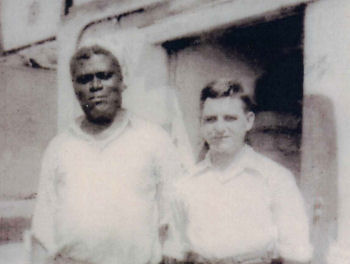 James Marshall, it is thought the young lad beside him could be the galley boy James Carson Colvin