Captain MacKenzie, known either as Daring Dexter or Black Mac was not a universally popular master.

I found mention of your Union Castle Staff Register in the March 2007 edition of Family Tree Magazine.  I went to school in the 1950's with the three daughters of Captain D D McKenzie, Commander of the Arundel Castle. I didn't know much about the family until after "Mac" married his second wife, Jill.  They lived in Barton-on-Sea, Hampshire with the three girls (Anne, Moira and Sheila) who were educated at Fernhill Manor School, New Milton, and Ian Sayward, Jill's son.  Ian went to Warsash and then joined the merchant navy.  The McKenzies moved to a home in Boldre, near Lymington and finally to Torquay.  I think Mac may have died not long after he retired but I'm not sure of the date as by then I was in North America.  I remember the family with fondness - especially Jill who, despite a big age difference, was a special friend to me.  I have attached a photograph which is probably of no use whatsoever for your web site, but I thought you might enjoy seeing it.  It is a scan of a poor quality Box Brownie job, taken in the back garden of the house at Barton-on-Sea around 1957.

Do you know why he was called Black Mac? I have no idea as I didn't know him very well; I saw a lot more of Jill than Mac because he always seemed to be at sea!

What a wonderful index you are building.  I am a family historian and know how important such works are.  I have been working on a school records database for some years - recording the schools, teachers and pupils in our area from 1830 to 1970.  Many of the source registers have not survived, but we currently have over 20,000 pupils on our "roll".

I notice from your biography that you were briefly at Berkhamsted.  One of my old boyfriends was there in the mid-1950's (I think he had the distinction of burning down a wing of the school!).

Good luck with your recording.

Captain MacKenzie and his wife Jill. 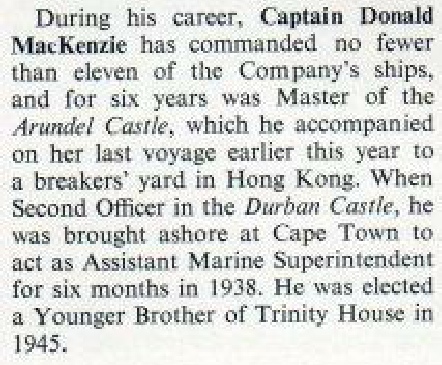