Completed in April 1872 she was actually the second steamship to enter service after the Edinburgh Castle and was deployed on the London - Calcutta - China service returning with tea.

She was transferred to Donald Currie's Castle Mail Steam Packets Co. Ltd in 1876 and in 1879 was placed on the Intermediate service after a spell as an 'extra steamer' on the mail run.

In 1880 she was sold to the Marques de Campo of Cadiz and renamed Valencia. As he held the mail contract between Cadiz and Manila in the Philippines she was placed on that service and was operated by his Compania General de Tabacos de Filipinas.

She was taken over with the other three 'Tabacos' steamers in 1884 when the mail contract was acquired by Cia Trasatlantica Espanoles, retaining her name and operating the same service.

She finally ended her career in 1889 when she was sunk following a collision in the North Sea. 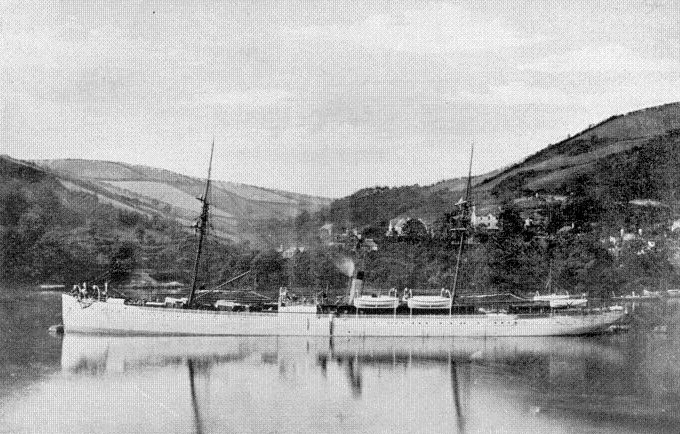 It is a long time since I researched this subject, around thirteen years.

Then I had come into possession of some old family papers and had established contact with the museum of the Royal Engineer Regiment at Chatham, by way of trying to understand them.

Our mutual interest in regimental history led me to spend many months transcribing and committing to disk, hand written letters that had been bequeathed to them over the years. Interesting as such things are, the museum just didn’t have the resources to spend weeks trying to decipher faded strangely formed handwriting. So they were more than happy to get some benefit from my efforts and were very helpful as a result.

Among their papers relating to my period of interest was a copy of an extensive field report of the officer commanding the 5th Field Company RE (Captain Walter Parke-Jones), and there were personal letters home that had been donated as well. It was a combination of all these sources (theirs and mine) and the multiple references to the Walmer Castle that gave me an interest in the ship and prompted a silly notion to find a photograph of her.

At the time of my efforts the WWW as we know it, did not exist. An Internet search these days generally provides a vague statement that the Walmer Castle went on intermediate service in 1879, whatever that was supposed to mean.

But as it happens, I know, I found out the hard way.

On the 2nd December 1878 the Walmer Castle sailed from Chatham serving as an RE Regimental troopship bound for South Africa and the Zulu War. My great grandfather was an eighteen year old bugler with the 5th field company. His lieutenant was John Chard, who was to win the Victoria Cross commanding the mission station at Rorke's Drift, some short time later.

Chard didn’t look like Stanley Baker, didn’t wear a fancy uniform and had a beard not unlike Osama Bin Laden. I kid you not, there are the photographs to prove it. He nonetheless has my approval as had there been a lack of success at the Drift, I would not be sitting here typing this.

The ship carried the 5th and 2nd field companies, commissariat stores and wagons, Officers, their wives and men. The wives disembarked on the 2nd January at Cape Town, to remain in safety at the Castle Barracks.

It was said that there were about seven hundred on board in addition to the crew.

The troops arrived at Port Natal/Durban on the 4th January 1879. The Zulu nation had been warned that a state of war would exist on the 11th January if they did not give up their weapons of mass destruction, or meet some similarly contrived demand.

The Zulus were capable of defending themselves, yet were no great threat. However the propaganda machine had been put to good use in suggesting that they were. It’s true that a few young warriors had killed a cow or two, but it wasn’t the terrifying uprising it was made out to be.

Whilst there remains a view that the war was part of our glorious past, there is a more academic view that it was a cynical cover for a land grab that would pave the way to gold, diamonds and cheap labour. That was the Victorians for you, you can be sure that wouldn't happen today.